The prisons, jails and detention centers in New York City have long been evolving in service of capitalism. From their inception to warehouse poor workers to a current plan being pitched to specifically house gender-oppressed people, it is clear that “reforms” to make these cages more “humane,” throughout their entire history have failed to bring more humane conditions.

Humane would be to provide for basic needs for all people, like housing, food and protection from a global pandemic, rather than criminalizing acts of survival — especially for people disproportionately targeted by the criminal punishment system. These include but are not limited to poor people, Black, Brown and Indigenous people, LGBTQ2S+ people, disabled people and those who find themselves at the intersections of multiple class-based oppressions.

The deadly jail of Rikers Island

“A precursor to the modern jail, New York’s first city-run ‘charitable’ institution, charged with ‘caring for the poor, the beggars and the dependent sick’ was a workhouse established in 1736. An almshouse, Bellevue, Blackwell’s Island and Ward’s Island all followed suit in the middle of the 19th century. The Department of Public Charities and Correction was established in 1860 to oversee the city’s institutions of social welfare and crime control.

“The city designated Rikers a carceral island in 1884, one year before the Department of Correction split from the Department of Public Charity under pressure from reformers who wanted a clearer division between the ‘deserving’ virtuous poor and the ‘vicious’ ‘criminal’ poor. The project to open Rikers finally came to fruition a half-century later [in 1932] in part because conditions in the city’s existing workhouses and jails had been deteriorating for at least 20 years, generating numerous reports on the poor conditions in which incarcerated people languished.” (Current Affairs, March 15, 2021)

Conditions on Rikers Island — where, like most jails across the country, upwards of 70% of people are held pretrial simply because they cannot afford to pay bail to get out and await their day in court — have long been abhorrent. People have experienced all sorts of physical and psychological abuses, faced extreme medical neglect, and died. Complaints as to the conditions at Rikers have been raging for decades, and every shot at reform has just reformed the way violence is enacted there and allocated resources to further incarceration, rather than the services that people need to live.

A growing movement to close this notorious and deadly jail has put pressure on elected officials to address the brutal conditions inside. In October 2019, former Mayor Bill DeBlasio announced and the New York City Council members approved a plan to close the Rikers Island jail complex by 2026 and open four new borough-based jails, at a total cost of $8.7 billion — despite outrage at the fact new jails would be built. The city has since officially delayed the plans, with completion projected well into 2027.

Inadequate reforms to reduce the amount of solitary confinement and calls to the federal government to investigate the human rights abuses have failed to stop the immense harms inflicted by sites of brutality like Rikers. (City & State New York, April 17)

The petition decried the transfers to state prisons that are farther away, proposed as a so-called solution to the overcrowding and made the connection between state and interpersonal violence. “How does making female detainees more isolated and less able to meet with counsel, court advocates and visitors address the emergency? . . . If you’re going to declare an emergency, we insist that the government shoulder the burden, not the women who are already subjected to lengthy detention.” (Bronxdefenders.org, Oct. 18)

A “special” jail for women and gender-nonconforming people is one of the proposed solutions to some of the abhorrent conditions faced by thousands held captive at Rikers in a plan by the Women’s Community Justice Association, the Prison & Jail Innovation Lab at University of Texas at Austin, the Justice Lab & Center for Justice at Columbia University and the real estate developers HR&A Advisors. The jail is proposed for the site of the old Lincoln Prison on 110th Street in New York City.

This plan is an inadequate and violent response that will not dramatically improve the material conditions women and gender-oppressed people face as we are experiencing the collapse of capitalism.

Particularly in an era where the rollback of legal abortion is a very real threat for millions, the increased criminalization of reproductive autonomy is a very real possibility — with the result of an increasing incarceration of women and gender-nonconforming people for “crimes” of asserting their bodily autonomy.

“In hundreds of cases [in the U.S.] over the past 50 years, pregnant people have faced criminal punishment for the outcomes of their pregnancies. In some instances, police and prosecutors have exploited the law in inventive ways or gone outside its bounds, flexing the power of the state over the bodies of pregnant people in the name of ‘protecting’ the unborn,” reports the May 5 New Republic. “National Advocates for Pregnant Women has identified at least 1,600 such cases since 1973 involving arrests or other deprivations of liberty, according to executive director Lynn Paltrow. The wide net cast by criminalization — profiling, surveillance, arrests and incarceration, along with the cascade of consequences that follow — has already snared hundreds of people, even with the protections of Roe v. Wade in place.”

In place of Rikers, a new “gender-responsive” jail would expand the capacity to brutally warehouse poor women and gender-oppressed people and threaten to further obstruct real public safety, while draining resources from city and state programs and services that people in New York need to live. Sites of incarceration have been detrimental to our collective public health, which has been made even more apparent during the deadly COVID-19 pandemic. 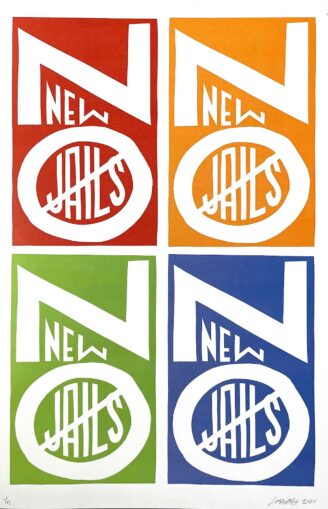 We don’t want more “gender-responsive” prisons, jails or detention centers; we want to dismantle the apparatus that criminalizes survival for the poor and oppressed. We want to abolish the conditions that enabled the growth of caging human beings. As the capitalist state increasingly will not and cannot provide to meet basic human needs in a pandemic and beyond — only providing endless war instead — we want decarceration and investment in making sure people have adequate food, housing and other necessities, rather than sites of incarceration that reproduce a violence akin to the enslavement of those once deemed property.

In moments like these, we look to the resistance shown by abolitionists in New York City fighting jail expansions and to groups like Californians United for a Responsible Budget, which have successfully pushed for decarceration. Expansion plans like the one in New York City to build a so-called more “gender-responsive” jail have been defeated in the past and can be defeated again now.

No new jails! Invest in people, not prisons and police!