The recent leak from a whistleblower that the Supreme Court could reverse Roe v. Wade — ending access to abortion for most people — has put reproductive justice activists on high alert. In the recent pushback, right-wingers like Texas Gov. Greg Abbot and journalist Abigail Shrier came for trans children; then they hamstrung queer and anti-racist teachers from teaching and living their full authentic lives, and now they’re threatening to finally remove reproductive autonomy. 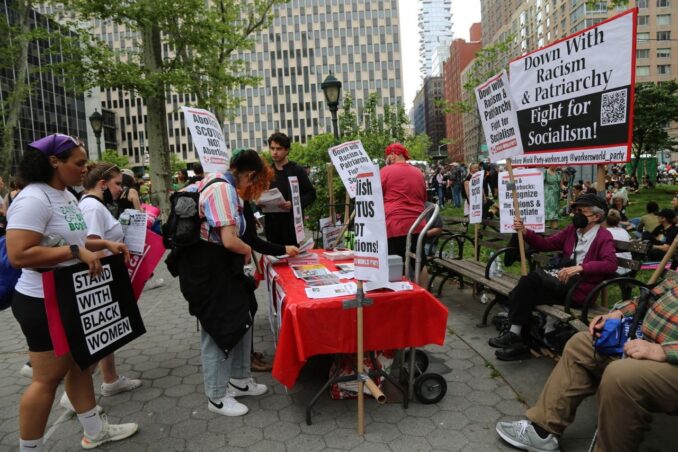 The feelings I had on May 3, the day of the leaked news, were very similar to the feelings I had on Nov. 8, 2016, when Trump was elected U.S. president. I feared for my family and for the well-being and safety of marginalized people in the United States.

That was what I believed six years ago. Then as I set about doing my part in righting the wrongs of the Trump election, I slowly started to learn the Democratic Party I was taught to admire and uphold wasn’t any different in functionality to the Republican Party.

My epiphany started with the rhetoric Democrats were using to galvanize their voter base. One of the reasons I was a Democrat was because I saw the party as the beacon of progressivism and the defender of women. However, rather than look in the mirror and reflect why (mostly white) people were voting in droves for Donald Trump, the Democratic Party leaders decided to point the finger at two women: Jill Stein and Susan Sarandon. They blamed Stein for taking away Hillary Clinton’s votes, and they attacked Sarandon as “mentally unstable and psychotic” for saying what so many dedicated anti-imperialists already knew: Clinton is a war hawk.

The Democrats dismissed their critics from oppressed nationalities as “Bernie Bros,” even though many are real socialists (and not the diet version that Bernie pedals). This was what really got me to reconsider my dedication to the Democratic Party: If it could be this dismissive to marginalized people with everything on the line, imagine how the Dems would act once they are in power.

Well, I didn’t have to imagine for long. Once I started to become skeptical, I began to look at all Democratic actions (and inactions).

The party of the working class?

You probably heard at some point in your life that the Democratic Party is the party of the working class, and that they are the source of all the social support programs we take for granted.

But in the 1990s, President Bill Clinton, rather than fight to reverse the agenda of neoliberal austerity kick-started by Ronald Reagan, abetted it by signing welfare “reforms” under the guise of “personal responsibility.”

Ever since 1996, when the Personal Responsibility and Work Opportunity Reconciliation Act was signed into law, income levels of female-headed households have plummeted, and the number of extreme-poor U.S. households living on a cash income of less than $2 per day per person climbed, reaching 1.65 million households in 2011. (The Economist)

As disheartening as his actions were, Bill Clinton was a bit before my time, so he didn’t impact me much. What did strike me, however, was hearing who deported the most immigrants. Was it George W. Bush? Nope. Was it Ronald Reagan? Nope. Was it Donald Trump? Despite his “pro-America,” crypto-fascist rhetoric, no. It was Barack Obama. The man who campaigned on hope and change. Obama — the man who peddled his life story as a son of a Kenyan immigrant who overcame the odds to become the “leader of the free world” — deported over 2.5 million people between 2009 and 2015. (tinyurl.com/teyar839)

Realizing that the Democratic Party was effectively the same as the Republican Party was the spark that led me to pursue more radical politics.

Now the attack on access to abortion has the potential to awaken more “recovering liberals” like me. However, the messaging from the politicians in blue is redirecting the energy that could lead to a mass political awakening, back into a bourgeois and capitalist party that offers only empty rhetoric and false promises.

During his “Hope and Change” world tour in 2008, Obama promised to sign the “Freedom of Choice” bill into law, which would have guaranteed that reproductive rights would be constitutionally protected in the U.S. When asked about that same bill during his first-100-days press conference, he offered this pathetic cop-out:

“Now the Freedom of Choice Act is not my highest legislative priority. . . . I think the most important thing that we can do to tamp down some of the anger surrounding this issue is to focus on those areas that we can agree on. And that’s where I’m going to focus.” (Politifact/truth-o-meter.org, June 12, 2012, tinyurl.com/6e79mxdu)

Eight years later, Democrat Hillary Clinton, whose presidential campaign was poised to shatter the glass ceiling, selected as running mate Tim Kaine, a senator from Virginia whose stance on abortion were not solid and consistent. This could have been an issue with a Republican majority, forcing a Clinton Administration to “compromise” in the Senate.

Last but not least, Ruth Bader Ginsburg — yes, the notorious RBG — had every opportunity to retire before the end of Obama’s second term to allow for the opportunity for a Supreme Court Justice that would not vote to overturn Roe v. Wade. But she didn’t, laying the foundation for Trump to pack the court with Brett Kavanaugh, an outright sexual predator, and Amy Coney Barrett, with her plans to create a “domestic supply of infants” for adoption by banning abortion.

With all that inaction and indifference, it is infuriating to hear the Democratic Party leaders repeat platitudes about the coming November vote like: “This is the most important election of our lifetime” — as if voting for Democrats has really changed things in a substantial manner.

The Democratic Party has proven that they are willing to let reproductive autonomy and other human rights fall by the wayside in favor of the capitalist status quo. They do not have the masses’ interest at heart — only those of the big corporations, oligarchs and defense contractors.

It’s time to divest from the Democratic Party, once and for all, and build solidarity with proletariat movements of all stripes in the fight for a better life for all.