The following excerpts are from remarks by Larry Holmes, Workers World Party First Secretary, at a May 19 New York City branch meeting.

Most bourgeois economists are now predicting a recession, which is a sharp downturn in the economy. A recession used to be considered cyclical, but this has changed, just as the nature of the capitalist crisis has changed. Because capitalism has heard its death knell and is in a permanent crisis. 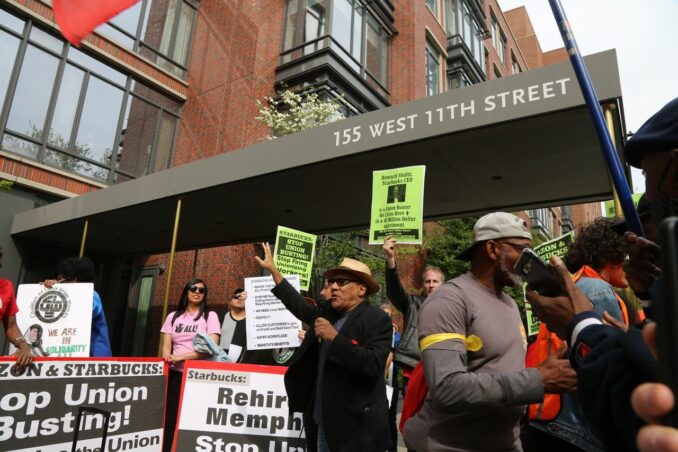 Larry Holmes speaks in front of the penthouse of Starbucks CEO, Howard Schultz, on May 1, 2022 in New York City.

There is no scientific definition of the term “recession.” It just means something bad is going to happen during the downturn: unemployment, austerity, small and midsize and large businesses going out of business, etc., etc. Or maybe even something worse, something far worse. I’m sure that some of you have seen the wild financial market swings lately.

This raises a discussion of the falling rate of profits, and I saw some comrades reading what Comrade Sam Marcy wrote about that 40 years ago. This is something good to read at this time: “The Changing Character of the Working Class,” Chapter 4 in “High Tech, Low Pay.” (marxists.org/history/etol/writers/marcy/hightech/chap4.html)

Raising interest rates is something the capitalists have feared doing since the 2008 global financial crisis. Because they were worried that the underpinnings of the capitalist economy on a global basis were so weak that if rates were raised, that might precipitate something worse than a “recession.”

So instead, in order to save capitalism, they’ve been pumping trillions and trillions of dollars into the economy, particularly into the financial markets. And even more so during the pandemic, to keep the capitalist economy afloat.

This has created enormous “bubbles” — when the price for something, a stock, a financial asset, etc., exceeds its fundamental value by a large margin — leading to incredible debt. And when that debt starts to come; a lot of it’s hidden, but it’s still in the trillions of dollars. The capitalists don’t know; they’re not even sure, can’t even imagine, what the ramifications are for the economy.

You’re hearing the word “stagflation” a lot. That is what capitalist economists and politicians called the crisis that capitalism was in during the 1970s into the early ’80s. That was the biggest capitalist crisis since the Depression. And the capitalist class came to label it “stagflation.”

But “stagflation” is really the breakdown of the capitalist economy. It’s the economy’s inability to function based on capitalist assumptions and rules of how it had been functioning up to that time. So economists and politicians considered what they call stagflation to really be a capitalist crisis — an existential threat to capitalism.

They came to the consensus in the 1980s that they had to take dramatic steps to save capitalism. So that’s where you got concepts and plans like restructuring, neoliberalism, globalization and high tech — essentially a ruling-class declaration of war on the working class. This was them tearing up the relative “peace contract” the capitalists had with sections of the working class with respect to unionism.

We could go back to the economic crisis, take the nuances and the words, break them up and study them. This is all good if it clarifies and doesn’t confuse. But I want to focus on what I think is the most important aspect of this developing economic crisis.

It’s the political crisis that this evolving capitalist crisis generates that’s of great importance to the working class and to those who are struggling, like ourselves, at the heart of world imperialism, to help be the vanguard of the working class.

This economic crisis comes at a very unique time. It comes when workers have finally begun to rise up, where there is an incipient worker uprising in its early or intermediate stages. However you want to characterize this uprising, it’s on a level we haven’t seen since the 1930s, that big move forward for the working class in terms of organizing.

The question now is this: Will the economic crisis — with the prospect of layoffs, plant closings and all that comes with that — take the steam out of this worker rebellion? We’re looking at Amazon and Starbucks, two huge multinational capitalist behemoths. And they are the big targets of workers, and that affects other organizing drives, and their stocks are down! That raises the prospect of those companies closing Amazon warehouses or shutting down coffee shops, whether directly related to fighting the union drive or because of the economy.

No permanent gains under capitalism

So will the economic crisis take the steam out of the worker organizing? Or will it make workers more angry, maybe even make them more revolutionary? These are questions that we have to take very seriously. And there is a hope that the latter is true — that the economic crisis won’t take the steam out of the workers’ movement but will fuel it, and that will make workers more revolutionary. We shall see.

In the wake of a deepening capitalist crisis on a global level, it’s important to understand what Marx and all the great Marxist theoreticians have taught us. And that is that the fight of workers for better conditions in their particular location is essential to them coming together as a class as a whole.

Because, comrades, whether it’s up or down, whether they win or lose, whatever gains the workers achieve through the struggle, those can never be permanent under capitalism.

Unless and until capitalism is overthrown, those gains will always be something that the gyrations, changes of class relations and capitalist crises can take back.

I have been reviewing some of the positions on the Ukraine war, NATO and U.S. imperialism, sent out by Danish and Portuguese communist parties related to the developing capitalist crisis. These views seem close to ours. They see the war as a catalyst hastening the global economic crisis and as a problem for the working class. That is a discussion in itself — fuel prices, food, etc.

Just as we as communists in the U.S. are, of course, against U.S. imperialism and NATO, so are these parties against the imperialists of their countries. But this is the problem: The working classes of these countries at this point are not able to resist the propaganda and the stance of their own ruling classes in relation to the war in the Ukraine.

What ultimately will happen is the ability of the working class to understand there are sides and to take a side. And those sides will be delineated on the basis of class, when the war begins to affect workers economically. Of course there are more factors than that; there’s a fear of world war, etc.

All issues tied together

But to the problem — and this is a historical problem. The left in this country, due to historical circumstances and events beyond their control — I’ve made this point many times, but I feel it’s necessary to repeat it — has been rendered somewhat weak in relation to the historical role of the working class, as Marxist and communist revolutionary theory sees it.

That’s because the working-class movements have been weak in the U.S. The union movements have been weak, not only in terms of numbers, but by not operating in militancy. And now is a time when the development of the working class must be seen as the only answer to these crises, whether it’s the economic crisis, the crisis of U.S. imperialist war such as in the Ukraine or dangers internal to the U.S., such as growing attacks on women, LGBTQ+ people and people of color.

The economic crisis is a breeding ground for fascism, which is at a dangerous level in terms of that movement in the U.S. That’s what was reflected in the white-supremacist attack on the Black community in Buffalo, New York. The “great replacement” conspiracy theory, held by that shooter, sounds like it’s something out of the Third Reich of Nazi Germany — spouting that the lawful “majority” population of the “white Christian nation” of the U.S. is being deliberately “replaced” by people of color.

We have got to fortify our sense of the historical role of the working class ideologically and, to the best of our ability, put this perspective in practice. We must influence as many other people as we can, particularly young potential revolutionaries. We can no longer afford to be merely issue oriented, as important as any individual issues are.

All the issues are tied together. And what ties them together is the class struggle. We must have and perfect a working-class strategy going forward. Because that class strategy is the only strategy capable of defeating war and fascism and ultimately bringing about communist revolution.