May 22 — Under heavy pressure from U.S. imperialism to aid its anti-Russian offensive as part of the Ukraine war, the governments of Sweden and Finland applied to join the NATO military alliance. President Joe Biden is attempting to rush through acceptance of their membership as part of the hybrid war against Russia. 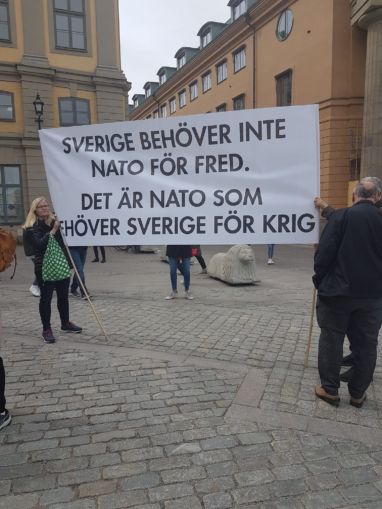 Banner at demonstration in Stockholm, May 21, reads, ‘We don’t need NATO for peace! NATO needs us for war!’ Credit: Mike Powers, Folket I Bild

This rush is further evidence of the belligerent aims of U.S. imperialism in this period and its willingness to use the Ukrainian people as a battering ram — and as cannon fodder — in the anti-Russian offensive. Such an expansion would place 10 enemies surrounding Russia’s access to the Baltic Sea.

Only the refusal of the Turkish government to accept the two countries is postponing what might have been a lightning-quick expansion of NATO. The Erdogan regime’s response is based mainly on the non-hostility of Sweden and Finland to Kurdish migrants and their organizations, whom the Turkish rulers consider “terrorist.”

In a report to Workers World, Mike Powers — a U.S. war resister from the 1960s who emigrated to Sweden — wrote that in 20-odd cities and towns throughout Sweden, protesters joined rallies and marches over the May 21-22 weekend to oppose the government’s decision to apply for membership in NATO. He wrote that the formal decision to abandon the more than 200-year official policy of neutrality came in the midst of a frenzy of fear whipped up by propaganda about the armed conflict in Ukraine and a threat to the security of Europe.

Speakers at the Stockholm protest included Thomas Hammarberg, a former socialist MP and European Council Commissioner for Human Rights; Kajsa Ekis Eknman, a well-known writer and journalist; as well as representatives from the NO to NATO group, Folket I Bild (People in Pictures); Women for Peace; and the Revolutionary Communist Youth (RKU).

According to Powers, the Swedish government is trying to avoid a referendum on joining NATO. Despite the overwhelming government and media propaganda against Russia and for militarism, polls have shown that a majority of the people either opposes Sweden joining NATO or has grave doubts about that choice.

Lievemaaa writes that anti-Russian propaganda has been strong in Finland for years, but after the Ukraine war it reached a whole new level with the government’s aim of persuading the Finnish people to accept NATO membership. It is beyond ridiculous that Russian cats were barred from attending a cat show in Helsinki and Russian violinists were barred from the Sibelius violin competition.