May 14 — Fueled by recent attacks on the Palestinian people, today’s commemoration of Nakba 74 was a day to remember. Hundreds of protesters took over Valencia Street in the Mission neighborhood to “honor Shireen Abu Akleh and rise up for Palestine.” 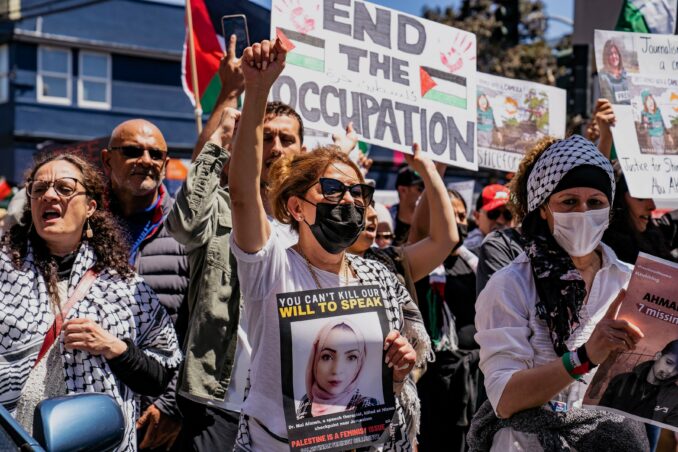 As people gathered for an opening rally, they were handed signs demanding justice for Abu Akleh, an activist and Al Jazeera reporter cherished and loved by her people. She was assassinated by the Israeli government in Palestine May 11, while on the job reporting on the Israeli raid on Jenin refugee camp. And on May 13, Israeli Defense Forces forces attacked Abu Akleh’s funeral procession in Jerusalem.

The Boycott, Divestment, Sanctions movement  has issued a statement that in April of this year alone, the Israeli government killed 23 Palestinians and bombed Gaza. Shortly before the Nakba anniversary marking the Israeli government’s 1948 expulsion of the Palestinian people from their homeland, the German city of Berlin announced a ban on all outdoor Nakba commemorations, including a memorial gathering for Shireen Abu Akleh. The U.S. continues to back Israel and its Zionist attacks on the Palestinian people.

After a short rally, as the demonstration surged up Mission Street through the heart of the Latinx community, many people waved and shouted their support of the protest. Chants of “From the River to the Sea — Palestine Will Be Free!” echoed loudly. Palestinians unfurled and carried a large Palestinian flag at the front of the march — a flag banned by Israel in Palestine. Several young men climbed street poles and stood proudly over the march with their flags flying.

Hatem Bazian, longtime Palestinian activist, author and professor at the University of California-Berkeley, captured the sentiment of the people. He first connected the racist police assassinations of Black and Brown youth in the U.S. and the IDF’s assassination of Palestinians.

Then Bazian stated: “We are commemorating 74 years of resistance, 74 years of return, 74 years of being audaciously brave.” He directed his closing words to Zionist supporters and leaders of the Israeli state: “We are coming back to Palestine whether you like it or not.”