Since the start of the COVID-19 pandemic, two-thirds of the families in the 70 poorest countries, the ones that the U.N. classifies as low- or medium- income, had their incomes drop so drastically that adults reported that they skipped eating so their kids could eat. Sometimes the adult fasts lasted for a day or more. (UNICEF-World Bank, March 9)

People living in the richest countries of the world, on the average, have had their savings increase during the same period, due to assistance from the governments like extended unemployment benefits or payroll protection plans.

According to the World Bank, between 119 and 124 million additional people entered extreme poverty in 2021, which means they live on less than $1.90 a day.

Sixty percent of the 70 low-income countries are now at risk of default, which has been made much more likely given the rapid rises in the prices of fuel, fertilizer, transport, energy and food — especially wheat, a key grain — due to the conflict in Ukraine. Hunger has produced rising popular anger with millions of people coming out into the streets all over the world. 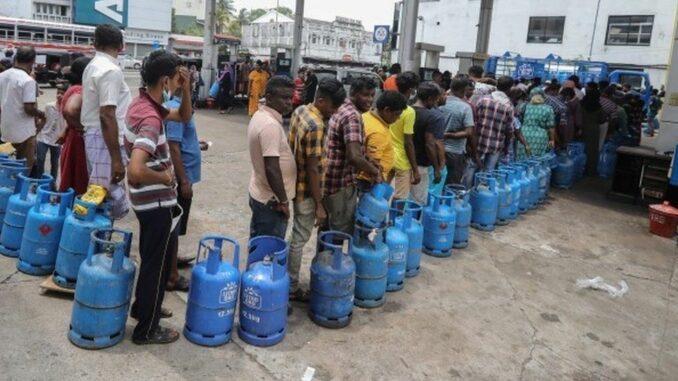 People in line for fuel in Sri Lanka.

Sri Lanka is an island of 22 million off the southern coast of India. Until three years ago, in the summer of 2019, it was extolled as “a jewel of investment.” Then when COVID-19 hit, Sri Lanka began its swift decline into the investment hell that led to its default in April.

Some of the bourgeois news sources covering Sri Lanka blame the incompetence and corruption of its political leadership but ignore similar financial and economic problems afflicting other countries in the area, such as Pakistan, Nepal, Bangladesh and the Maldives.

After a week of furious demonstrations in Sri Lanka, which involved physical attacks on government officials and their houses, the country’s president appointed Ranil Wickremesinghe as prime minister May 12.

This is the sixth time Wickremesinghe, who is in the opposition, has been prime minister, so his appointment is not a complete break with past governments. In his inaugural interview with the BBC May 13 — Sri Lanka is a former British colony — he pledged to make every effort to ensure families get three meals a day.

The price of food has tripled in the past two months; fuel to run cars and electric generators and to cook is scarce. Even firewood is hard to find, as is medicine.

Sri Lanka had so much debt that between 2015 and 2019, 90% of its new borrowing was used to pay the interest on loans that were due at the end of 2014. Borrowing to pay interest is unsustainable. (Le Monde, May 9)

Pakistan presents a scenario very close to Sri Lanka’s. It has a heavy debt load and not much economic activity; its currency is losing value while inflation is increasing, and its foreign reserves are diminishing rapidly. Its public debt has grown by 73% from September 2018 to February 2022, which is unsustainable. (Le Monde, May 9)

After a week of political turmoil in the middle of April, Pakistan’s parliament ousted Prime Minister Imran Khan and selected Shehbaz Sharif, who was in the opposition, as its new prime minister. Sharif is negotiating a major loan with the International Monetary Fund. As a condition of the loan, the IMF would require Pakistan’s government to remove subsidies on petroleum products, thus increasing the costs for energy and goods for Pakistan’s population.

India, China and the global economy

India is currently experiencing a heat wave, which has produced day after day of temperatures over 100 F. While the winter wheat harvest in southern and central India has been completed, it is not clear how this heat wave will affect the crop in northern India. How the heat affects the harvest depends on when the kernels are formed.

India has a large stock of wheat in its reserves and was expected to be able to use its stockpile to replace the wheat normally exported from Ukraine and Russia. But to preserve its own food security, it suddenly announced it was almost totally limiting its exports.

While China does not export wheat, it grows a lot for its own use. The effects of global warming on China’s wheat crop might lead it to make major purchases on the world market. These extra purchases could lead to an increase in the cost of wheat, leaving countries whose economies are weak unable to buy sufficient wheat.

The U.S. Federal Reserve is planning to impose interest rate hikes aimed at controlling inflation in the U.S. But this will tend to draw funds from lesser developed countries, since investors could then be attracted to the higher interest rates in the U.S.