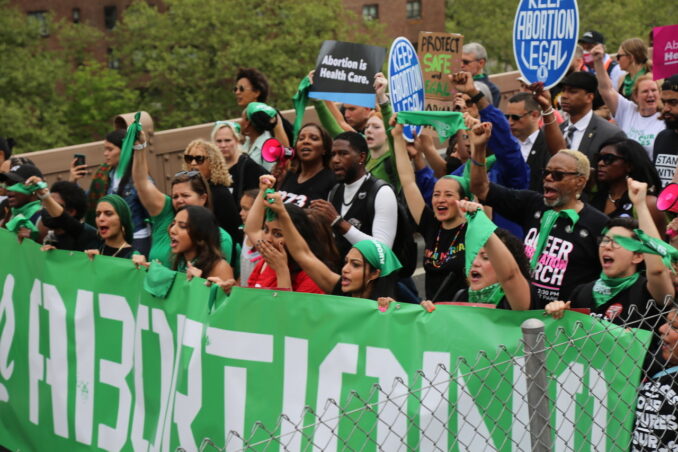 “We won’t go back!” was chanted by tens of thousands of protesters May 14 in 380 actions across the U.S. Participants in the “Bans Off Our Bodies” demonstrations denounced the attacks on the right to abortion, now facing an overturn by the right-wing majority on the U.S. Supreme Court. The court legalized this right in its 1973 decision in the Roe v. Wade case.

For almost 50 years, reactionaries have tried to overturn this historic ruling, won by a militant action-oriented mass movement, despite a then-majority of Republican-appointed justices. Conservative legislators have since implemented many obstacles to abortion seekers, despite the fact that the majority of U.S. residents support the Roe decision. 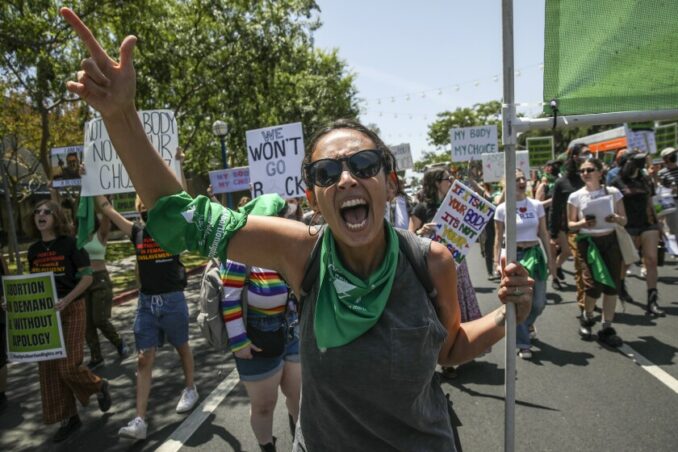 However, the goal has always been to get a majority of SCOTUS justices to overturn the court’s precedent ruling, and to outlaw abortions altogether. Former President Donald Trump obliged the right wingers and their big donors by nominating three members of the anti-abortion Federalist Society to sit on the top court.

Seizing the moment, reactionary state legislators proposed outrageous abortion bans, even punishing anyone who helps pregnant people get abortions. On Sept. 1, 2021, a six-week abortion ban with a bounty hunter scheme was implemented in Texas. Other state legislatures have enacted copycat laws, with no exceptions for rape or incest victims, including children! 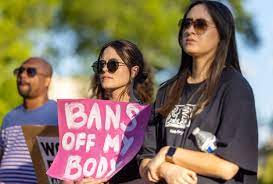 Meanwhile, Mississippi officials took the case of Dobbs v. Jackson Women’s Health Organization to SCOTUS. On Dec. 1, 2021, the state’s lawyers argued for overturning the Roe decision, while thousands of people protested loudly outside.

A majority right-wing court will soon decide the legality of abortions. If this cabal rules for Dobbs, they will usurp the rights of millions of women and other people who can become pregnant. They will lose rights to bodily autonomy, decision-making about medical care and whether or when to have children. But no matter what the laws prohibit, abortions won’t stop.

In early May, an opinion written by Justice Samuel Alito and signed by four other conservative justices was leaked. If this becomes the final decision, it ends the federal right to abortion and revives “states’ rights” to regulate or ban the procedure. If the SCOTUS majority agrees with Alito, half of the states will then ban abortions. Other legal rights could be endangered.

This “leaked opinion” set off emergency protests countrywide. Initiators of the May 14 protests fast-tracked the date for a national day of demonstrations. These groups include Women’s March, Planned Parenthood Action Fund, UltraViolet, MoveOn, the American Civil Liberties Union and the National Abortion Rights Action League.

Then on May 11, the Senate voted 51-49 against the Women’s Health Protection Act, which would have codified legal abortions. Fury at reactionary senators and SCOTUS justices grew and so did mobilizing for action. 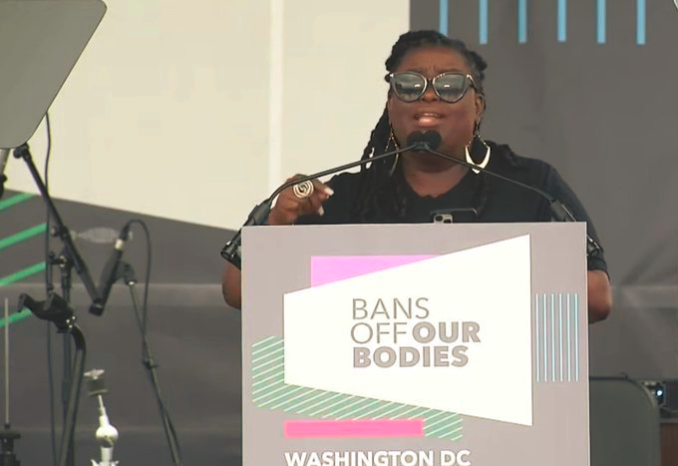 A war on people of color, low-income people

Sixteen states and Washington, D.C., have passed legislation protecting abortion rights if Roe is overturned. Some states are even allocating funds to help people travel to their states for abortions.

People who have resources can afford to go to states or countries where the procedure is legal. But people with low incomes — disproportionately Black, Latinx, Indigenous, migrants, disabled and other marginalized people — will be left with few, if any options, some dangerous. Already, Texas residents are appearing at border states hospitals with infections stemming from self-abortions.

Over half of abortions now occur by using medication, although reactionary politicians are trying to limit or outlaw those pills. Opponents are scheming how to stop abortion seekers from traveling to abortion-permitting states. Some proposed bans criminalize abortion patients, not only providers. Proposal of a national abortion ban is being floated in right-wing political circles.

Voting won’t stop the right wing in its zealous quest. What is needed to halt this assault on a fundamental human and medical right is a militant united struggle — with local and national actions — marches, rallies, picket lines, boycotts, job and school walkouts — and all types of creative actions together with allies.

This is an emergency! It was created by the far right in the capitalist class.  In socialist and socialist-oriented countries, reproductive rights and health care are a priority. 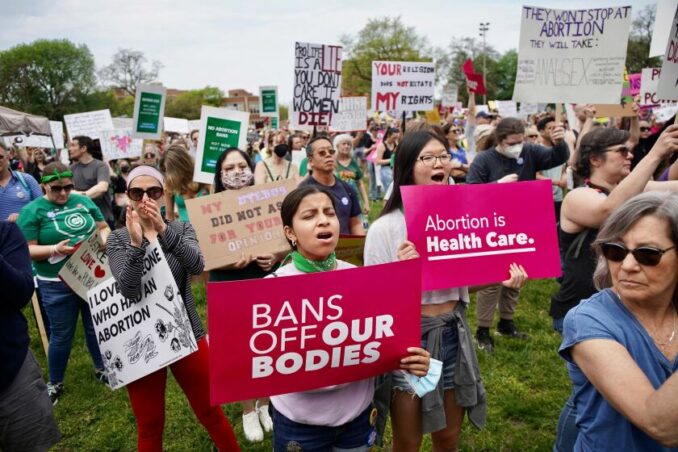 There were major demonstrations in Austin, Texas; Chicago; Los Angeles; New York City; San Francisco; and Washington, D.C. Here are highlights of some mobilizations on May 14. Crowds were multinational, multigender and multigenerational. 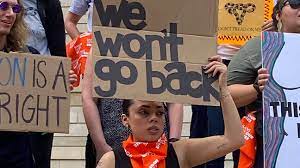 In New York City, thousands of people marched from Cadman Plaza in Brooklyn across the Brooklyn Bridge to Foley Square in Manhattan to protest the Supreme Court’s plan to overturn Roe v. Wade. Fogo Azul, the city’s women/trans/nonbinary drumline, drummed throughout the march, with its powerful cadence keeping people’s spirits high. The crowd was multinational, majority young and had participants from the LGBTQ+ community.

Workers World Party had a literature table at Foley Square and distributed copies of Workers World, a pro-worker, pro-socialist newspaper, to spark discussions. A large sign behind the table read: “Down with Racism and Patriarchy: Fight for Socialism,” drawing many people to the table. Hundreds of copies of a WW commentary, “We Won’t Go Back!” were received with interest by those in the crowd. 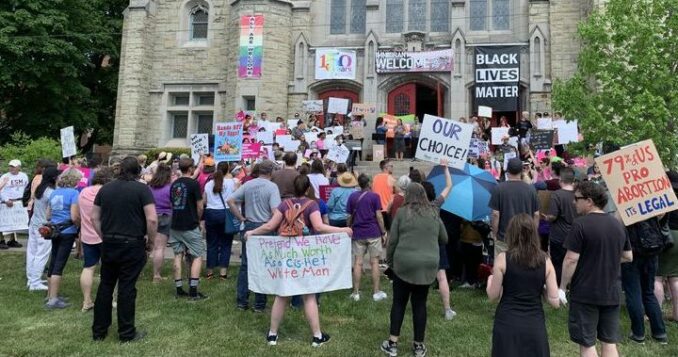 Rallying in Syracuse, New York, a crowd of 300 women, men and gender-defiant people of all ages gathered near the local Planned Parenthood Health Center. Organized by Women’s March Syracuse and other groups, speakers included representatives from the New York Immigration Coalition, the state Queer Youth Assembly and members of the local Black community.

Passing cars honked to support the pro-abortion-access signs — a dramatic contrast to anti-abortion protesters nearby, who were repeatedly cursed and yelled at by passing drivers. The PP clinic here was the first freestanding abortion clinic nationwide in 1970, one day after the procedure became legal in New York State. 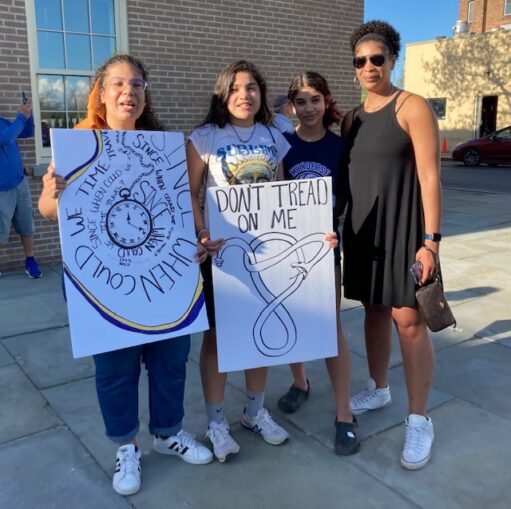 In Seneca Falls, New York, historic site of the first Women’s Rights Convention in 1848, over 100 people demonstrated May 13. Loud, militant chants included “My body, my choice!”

There was a big rally and march in Buffalo, New York, organized by local activists. The overwhelmingly young crowd roared over and over again, “We won’t back down; we won’t go back!” At a rousing rally downtown, a WWP member was among the speakers. Marchers ended on the federal courthouse steps to hammer home their nonnegotiable demand: “No abortion bans!” 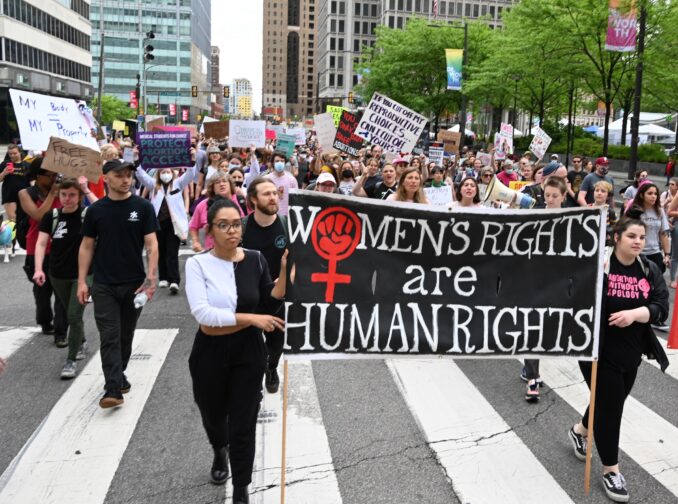 Following a short rally at Philadelphia’s City Hall, a multinational, multigenerational group of 1,500 enthusiastic people marched around the building and down Market Street behind the banner, “Women’s rights are human rights.” Rally chairperson Sam Rise stated: “Access to abortion on demand, without apology, is liberation.”

Marty Harrison, a Temple University Hospital nurse, declared, “As long as profit drives the health care industry, Roe is not enough. We need free health care on demand.” Maya Amor, a Black Latinx and queer student who led a reproductive justice school walkout May 13, said she turned 18 only to find out “that as a woman, I didn’t have the rights to my own organs.” The fighting mood of the crowd was strong. The time calls for more walkouts and work stoppages to drive home the power the women and gender-oppressed people hold in their hands.

At a Washington, D.C., rally, Monica Simpson, executive director of SisterSong, a women of color reproductive justice collective, told the crowd: “Anti-abortion legislation isn’t pro-life; it is pro-white supremacy. Black women told y’all this was happening, when they built the Reproductive Justice movement — because when they come for our bodily autonomy, they come for our full liberation.

“We need to Trust Black Women. We as Black and Brown women do not have the luxury of fighting for single issues. Reproductive justice, abortion rights impact many other areas of our life including racial justice and health care.” (SisterSong Facebook)

After the rally, thousands of protesters marched to the Supreme Court building, chanting “Abortion is a human right” and “We will fight back,” while wearing T-shirts with the motto: “Keep abortion safe and legal.” 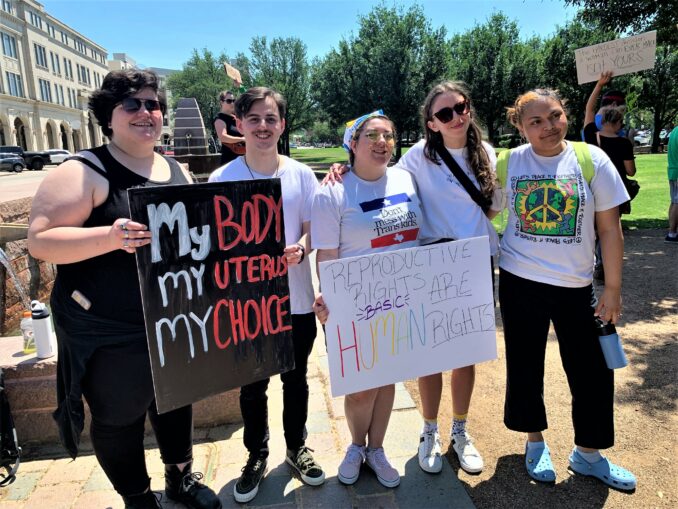 In the small town of Frisco, Texas, north of Dallas, 200 people rallied against the probable overturn of abortion rights by SCOTUS. From youth to great grandparents, the multinational and multigender crowd heard from local speakers, including many people of color who are social justice activists. Alex Colwell, one of two WWP speakers, was well-received as she spoke as a trans woman and a socialist. Many at the event sought her out to tell her how important her words were and how thankful they were that she spoke. 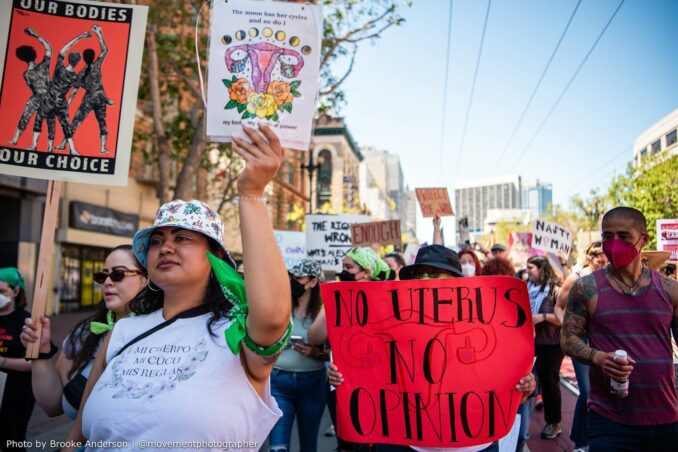 In San Francisco thousands of people gathered at the Civic Center and marched down Market Street demanding “Bans off our bodies.” The day began with a queer and trans-inclusive speak-out at 10 a.m., organized by the National Mobilization for Reproductive Justice-San Francisco. Speakers focused on more political demands than made by the mainstream “Women’s March-SF.”

Kristina Lee of Freedom Socialist Party emceed the speakout and stated: “We want to stop forced sterilization, say no to caged kids, end medical and environmental racism, and we have to defend queer and trans families.” At 11 a.m., a larger protest organized by the Women’s March gathered in the street surrounding the Civic Center and headed down Market Street. Thousands of people from all across the Bay Area, opposed to the attack on reproductive rights, chanted and sang loudly throughout the march. 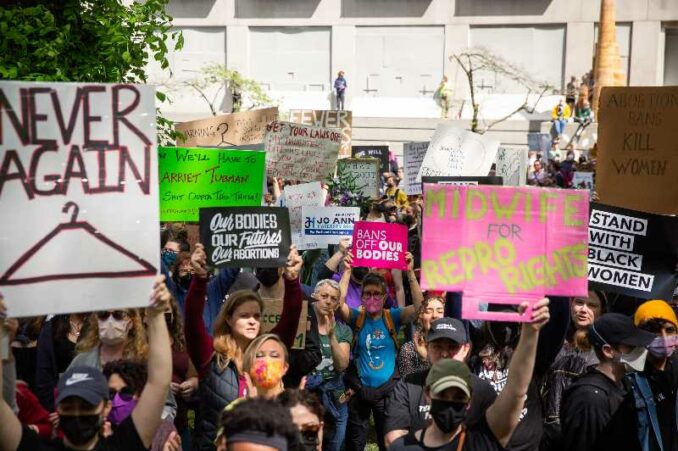 In Oregon, over 1,000 protesters demonstrated in Portland and hundreds joined in actions in Eugene and Ashland, as part of the national Bans Off Our Bodies movement. Oregon is one of 16 states with laws that protect the right to access abortions. There were also demonstrations in small towns across the state, including Florence and Sherwood, while a protest of hundreds of people took place in Vancouver, Washington.