On the morning of May 11, Israeli occupation forces murdered Palestinian-American journalist Shireen Abu Akleh, who was on the job in the occupied West Bank. She was reporting on Israel’s violent raid in the Jenin refugee camp, when she was shot in the face by an Israeli sniper.  She was wearing a clearly marked “PRESS” vest and helmet. 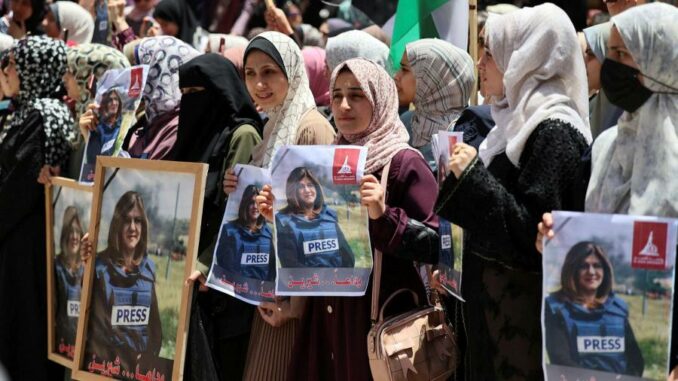 A colleague of Abu Akleh, producer Ali Al-Samudi, was shot in the back at the same time. “We [journalists] were targeted while we were standing in an empty area. There were no clashes, no gunfire and not even any stone throwers,” he said afterwards. (Middle East Monitor, May 11)

Palestinian human rights organizations, including B’Tselem, and Abu Akleh’s employer Al Jazeera have condemned her assassination. They accuse Israeli occupation forces of deliberately killing Shireen as part of its attempt to prevent the exposure of its war crimes and crimes against humanity.

Abu Akleh’s murder is not an isolated incident. In November 2015, Israel launched a “war” against journalists, Palestinian or not, for recording and exposing the Israeli regime’s violence against Palestinians in the occupied West Bank. Last year Israel bombed the offices of Al Jazeera and the Associated Press in Gaza. According to Nasser Abu Baker of the Palestinian Journalists Syndicate, Abu Akleh was the 55th Palestinian journalist to have been targeted and killed by Israeli occupation forces since 2000.

Israel has yet to be held accountable for even one of these crimes.

Shireen Abu Akleh was a role model for many women journalists and beloved throughout the Arab world for the bravery that she showed during her more than 25 years as a journalist exposing Israel’s brutal military occupation of Palestine and ethnic-cleansing campaign. Because of her fearless work covering the second Intifada, she has become immortalized as a symbol of Palestinian resistance. Thousands of mourners gathered in Jerusalem to pay their final respects during her funeral.

During the funeral procession May 13, as Abu Akleh’s casket was being carried to a Greek Catholic Church for prayers, militarized Israeli police shocked the world by launching an unprovoked assault on pallbearers and mourners. The pallbearers carrying Abu Akleh’s casket were punched, kicked and beaten with batons, causing them to nearly drop her casket.

European Union officials decried the “unnecessary” and “disproportionate” use of force, while the Biden administration refused to condemn what was a blatant and unprovoked attack on Abu Akleh’s funeral, saying, “We regret the intrusion into what should have been a peaceful procession.”

There should be no equivocations that Shireen Abu Akleh’s murder and the assault on mourners at her funeral by Israeli occupation forces constitute a war crime. Condemnation by world leaders and organizations is not enough, nor are calls for investigations.

No investigation by Israel or the West will provide justice for Abu Akleh or the thousands of Palestinians murdered by the Zionist occupation. The apartheid regime is a racist instrument of Western imperialism in the region. There is little to be gained by begging the West to hold it to account.

Zionism kills Palestinians with impunity; the complicity of the West signals it will never abandon Zionism. Ending the gross impunity that Israel again displayed this week requires a change in the equation of sovereign power.

Palestinians have a right to fight an occupation, to defend themselves and their land and ultimately to liberate Palestine by any means necessary. Armed resistance to occupier invasion and terror is an absolute right. Standing in solidarity with Palestine means defending their right to armed resistance and supporting their struggle to overthrow Zionist colonialism.

Workers World Party remains steadfast in our support of the armed resistance for the liberation of Palestine.