On the evening of May 14, a fascist carrying a rifle entered a supermarket in the predominantly Black neighborhood of Masten Park on Buffalo’s East Side and opened fire. While most official statements have more or less vaguely alluded to “racial motivations,” the shooter’s intentions were quite explicitly outlined in a manifesto, in which he wrote of his adherence to white-supremacist “great replacement” ideology. 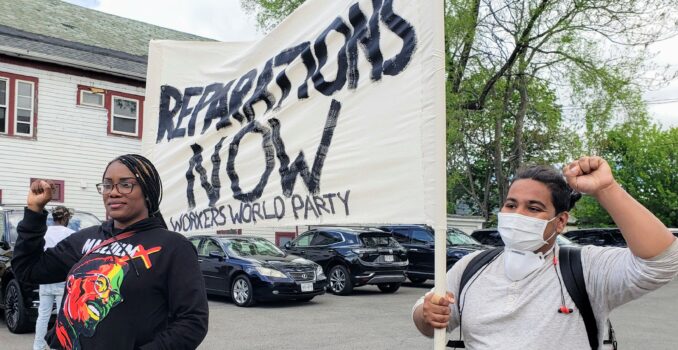 This banner in Buffalo answers “here’s your reparations!” written
on the assault rifle used by Payton Gendron in the May 14 massacre.

The “great replacement” is an idea in fascist ideology that white people are being systematically outreproduced by minority groups. It is an idea that finds expression in far-right politics everywhere, from the chant of “Jews will not replace us” shouted by neo-Nazis in Charlottesville in 2017 to Tucker Carlson’s nightly show on Fox News. It is an idea of fascist ideology, turned into action in the genocide of the peoples supposedly doing the “replacing” — including all people of color — and they were the target of this attack.

The shooter chose the location deliberately: the only supermarket in a neighborhood which is overwhelmingly Black. The technology he set up to livestream his attack reveals his racism. When the shooter points his gun at a passerby and notices that they are white, he says “Sorry” and continues on his way. All but two of the 13 killed and injured were Black.

Governor Kathy Hochul, while correctly describing this terrible act as one of “white-supremacy terrorism,” missed the mark in attempting to lay the blame on “social media.” The shooter socialized with his fellow white supremacists on Discord and livestreamed his attack on Twitch. But these media are not what caused the ideology; they are merely a means of communication of ideas.

The prime cause of this attack is white-supremacist ideology and the tradition of horrific violence, which it instigates and which it upholds. It is inseparably bound up with the very fabric of the white-supremacist, capitalist United States. The violence will be removed only by the destruction of that fabric.

Beyond the loss of loved ones by families and neighbors and the trauma inflicted on those forced to bear witness to this atrocity, the attack has wider ramifications for the community on which it was perpetrated. One of these is: Where will their food come from now?

The East Side of Buffalo, site of the attack and of generations of racist redlining, ghettoization and deliberate neglect, is a food desert. The Tops supermarket where the attack occurred is the only one in its neighborhood. While Tops has vowed to reopen its store, no one knows how long that will take.

A quarter of the children in Buffalo suffer from malnutrition — predominantly poor and Black children. A local charity, Buffalo Community Fridges, began a collection of food donations for distribution to the neighborhood in the early morning of May 15, but they had to stop collecting around midafternoon due to a lack of storage for all the donations. This effort, while laudable, cannot duplicate the efficiency of a supermarket in the distribution of food to an entire community nor should it have to.

Adding to the dramatic disruption of day-to-day life in Masten Park, the Buffalo Police Department and New York State Police have set up blockades on the streets surrounding Tops. Billy club-toting cops stand around pretending to protect, after having taken nearly half an hour to show up when the massacre happened.

When cops arrived, they arrested the white shooter without firing a single shot or roughing him up. Very out of character for a police department that a couple of years ago opened fire on a car while engaging in a dangerous high speed chase — leaving the passenger paralyzed —  because they found his tinted license plate covers “suspicious.”

But that’s the way cops arrest white-supremacist killers, like Dylann Roof after he massacred nine Black churchgoers as they sat at prayer in church. There is always the contrast with how cops murder Black men while arresting them for “crimes” — like George Floyd for simply trying to buy cigarettes or Eric Garner for selling them.

In the memory of those we have lost, death to fascism.