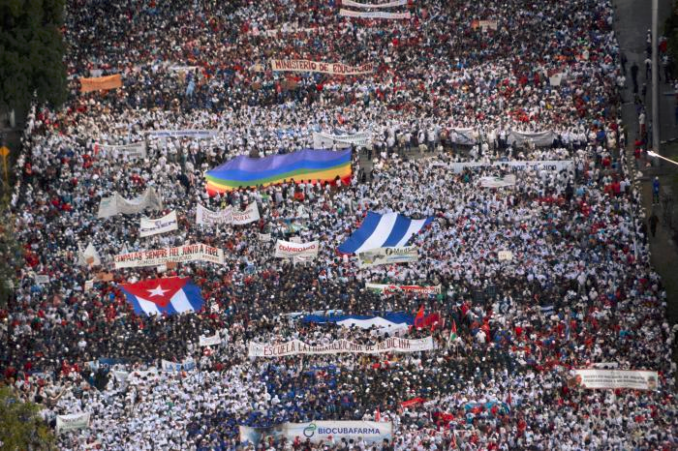 May Day in Havana
Credit: Granma

Five million people joined events around the island of socialist Cuba to celebrate International Workers Day — May Day. Large marches in Havana and the provincial capitals affirmed the commitment of the Cuban people to socialism. The mass gatherings showed the unity of the island’s people in opposing U.S. imperialism and its media, which has become increasingly vociferous and menacing in recent months.

This is the first in-person May Day celebration in Cuba since 2019, due to the global COVID-19 pandemic. The commemoration recognized the island’s health care system, free and available to all. Dedicated to all Cuban workers, this May Day put particular focus on health workers and scientists.

Scientists and doctors who developed and produced effective anti-COVID-19 vaccines were praised for their remarkable work in dealing with the crisis.

Because of the dedication and meticulous efforts of these and other health workers, 87.8% of the population has been inoculated with Cuban-produced vaccines. In acknowledgment of their heroic work, the Havana march was led by 50,000 representatives of the health and science sectors.

The people in this Caribbean nation have lived with a crushing 60-year blockade imposed by the U.S., causing great hardship. Yet, with their revolutionary determination and creativity, they have developed many resources to support their country in surviving and thriving. The Cuban people continue to defy the U.S. corporate media’s lies and distortions about their country.

On this workers’ holiday, the people showed their devotion to the Cuban Revolution was as strong as ever, supported by thousands of energetic young people. In solidarity with the heroic Cuban people, delegations from over 200 organizations from 60 countries joined the festive celebration, including a representative of Workers World Party.

Cuban Foreign Affairs Minister Bruno Rodríguez Parrilla tweeted, “It has been a day of joy and commitment to the unity and continuity of the Revolution.”