People are mobilizing in the streets to face and fight the likely overturning of the Roe v. Wade decision by the Supreme Court that legalized abortion in the U.S. in 1973. 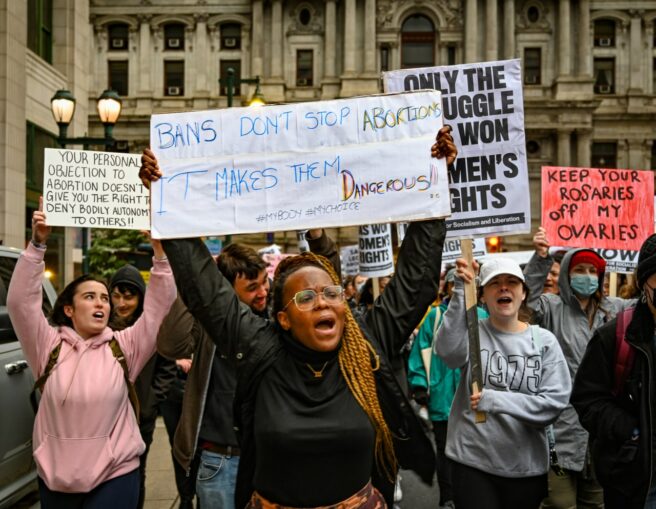 I grew up under segregated “states’ rights” in Alabama, so I know what that phrase is code for: white supremacy, subjugation of women, anti-immigrant persecution and the primacy of business profits over people’s needs.

This isn’t the first time SCOTUS has been a machine of extreme reaction. Its 1896 Plessy v. Ferguson decision was the death knell to gains for Black liberation won during and after the Civil War, setting up the state system of apartheid segregation under which I was raised as a white girl.

When I hear “states’ rights,” I see judges who slip their black robes over the white sheets of the Ku Klux Klan before they walk in to sit on the bench.

Seems like an exaggeration? But consider this. The “second” KKK — which flourished throughout the U.S. from 1910 to 1925 — persecuted, whipped, tortured and murdered thousands of people who deviated from “Christian” white nationalism based on patriarchal rule. At its height this KKK, numbering in the millions, held majority power in statehouses from Alabama to Indiana to Oregon. At least one sitting Supreme Court justice, Hugo Black, developed his political career as a Klan leader.

This KKK set out to “purify America” and “flogged Mexicans, tarred and feathered doctors who performed abortions and strong-armed politicians. They lynched Black people, showed up on night rides to terrify prostitutes, bullied Jews and lashed young women found riding in cars with men.” (theatlantic.com, Dec. 4, 2016)

The current U.S. Supreme Court would legalize the violent racist and woman-hating bigotry of the vigilante KKK, when that terror group “made towns clean” by stripping and literally tarring and feathering women who were sexually independent.

If Roe is overturned, many acts of violence against women and gender-oppressed people — with people of color suffering the most acutely — will become legal in the U.S.

Under some state laws — pending or passed — women and even underage children who are raped will be forced to carry resulting pregnancies to term. In some states under vicious laws like one proposed in Louisiana, people seeking or assisting abortions could be charged with felonies, even with homicide, given prison sentences of life — or death. If Roe is struck down, women and gender-oppressed people will die from the return of “backroom” or self-induced abortion.

We are looking at criminalization of a basic health care procedure in half the states in the country. At least 23 states would ban abortion immediately, and others would further restrict abortion. (workers.org/2022/05/63851/) 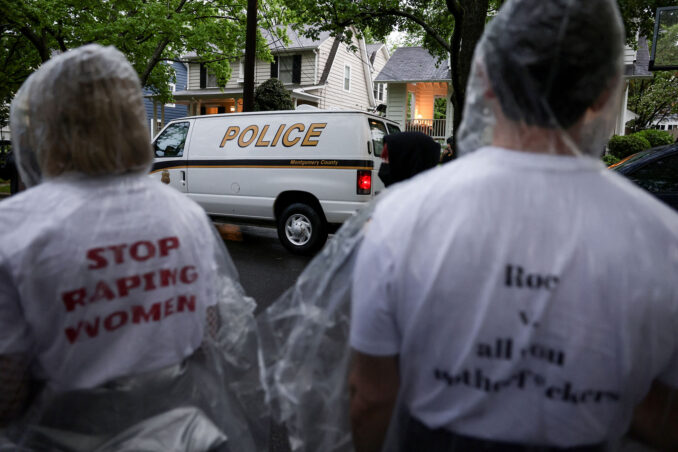 How very, very recently women in the U.S. have had any say about whether we would bear children — or if the children would indeed be “ours”?

This is especially true for Indigenous women, Latinx women and women of African descent who historically and to this day face dreadful discrimination in bearing children and being able to keep and raise their children.

Did you know, for instance, that the U.S. so-called “Father of Gynecology” performed tortures of reproductive “experiments” on enslaved Black women without giving them anesthesia? That in the 19th century, even white women were denied anesthesia for childbirth pain, because they were “under the curse of Eve” and punished for her “sin”? That until the late 19th century, children were considered the property of their father (or their mother’s enslaver), and even white mothers had no custody rights?

Did you know that into the late 20th century, mothers were still losing their children at divorce, if the woman was considered “immoral” for being sexually independent? I know, for I lost custody of my two small children in 1975 for living as a lesbian.

A militant women’s liberation movement won improvement for some circumstances of health care, sexuality, abortion access, reproductive rights and child raising for women and gender-oppressed people in the U.S. The victory in the now-embattled Roe v. Wade was won by that mass movement.

The right-wing forces fueling SCOTUS have worked for the last 50 years to reverse reproductive justice in the name of “life” — while at the same time backing the death penalty and life imprisonment, denying im/migrants entry to better their lives and refusing to make health care, including lifesaving care, available and affordable to all.

Why is the anti-abortion attack intensifying now? White supremacists are arguing the need for more “white children” to counter their racist theory of a “Great Replacement” of the U.S. white population by immigrants who are people of color.

Right-wing “Christian” patriarchs want to see women returned to the rule of men. And Big Business capitalists — looking at the overall declining U.S. birth rate — need more young workers in the reproductive pipeline, to ensure a steady supply of labor they can exploit to produce surplus value and profit. All these forces have coalesced in at least five of the Supreme Court justices sitting on that bench.

There is well-founded apprehension that a SCOTUS vote to overturn Roe would begin a reversal of earlier progressive rulings — from the right to contraception, the overturning of sodomy laws targeting lesbians and gay men, the right to same-sex marriage, protection for lesbian, gay, bisexual and trans people on the job or at school, and possibly even the right to interracial marriage.

The Republican Party may be the machine behind the current attack on access to abortion and reproductive justice. But the Democratic Party has held a Congressional majority many times since the Roe decision — and has never codified that judicial right into federal law.

Now is the time for those seeking reproductive justice to come together in a militant, mass, independent movement. Let us unite in this common cause — we who work for liberation for women and gender-oppressed people; those fighting all forms of racism, including under the banner #BlackLivesMatter; those who are for abolition of prisons, cops and the death penalty; people fighting against homelessness and for housing rights; those who desire health care for all, with subsidies and support for child care; disability advocates for rights and justice; those organizing workers for safe conditions, adequate pay and health care benefits that fully cover access to reproductive health; those fighting to build the way to socialism.

In a reinvigorated struggle for reproductive justice, the Women and Gender-Oppressed Caucus of Workers World Party supports these demands:

Abolish SCOTUS, not abortion! We won’t go back!

Abortion is health care, which is a right for all people. Abortion bans are state violence against women and any persons who become pregnant. Fund health care, instead of criminalizing abortion and funding war!

The proposed Supreme Court ruling is sexist, anti-poor and racist. Defend people of color, and fight the white-supremacist SCOTUS position on abortion! Demand union wages and benefits – like family leave and coverage for abortion and contraception costs. Workers can rise up for reproductive justice!

To stop the war on women and gender-oppressed people, build an independent fight-back movement of interconnected struggles.

Down with patriarchy, misogyny and capitalism! Socialism can and will liberate women and people of all genders.