Workers World Party members participated in conferences and other events with Ricardo Alarcón in many parts of the world and are proud to have heard his strong analysis and to have worked on common efforts. 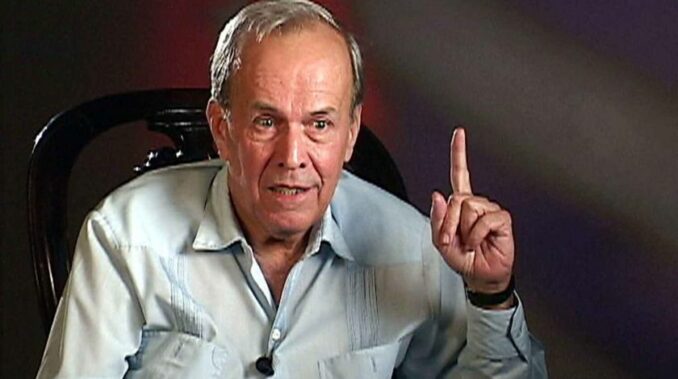 A monumental force in the development of a socialist Cuba, Ricardo Alarcón de Quesada died in Havana April 30, at age 84.

Born in Havana in 1937, he entered the University and became active in 1955 in the 26th of July Movement — the guerrilla campaign led by Commandante Fidel Castro, eventually leading to the overthrow of the U.S.-supported Batista dictatorship in Cuba.

In 1959, the year of the Cuban Revolution, Alarcón was elected president of the University Student Federation. In 1962 he was appointed director of the Americas division of MINREX (Ministerio de Relaciones Exteriores/Ministry of Foreign Affairs). He was later Cuba’s ambassador to the United Nations.

In 1992 Alarcón served as Minister of Foreign Affairs until he was elected president of the National Assembly of People’s Power in 1993, then serving in that position for 20 years.

Alarcón was praised by President Miguel Díaz-Canel Bermúdez, First Secretary of the Central Committee of the Communist Party, in a May Day message on social media:

“Last night has died in Havana, Ricardo Alarcón de Quesada, great patriot and brilliant diplomat of the #CubanRevolution, whose work he defended with passion and solid arguments, making our people proud. All of #Cuba feels his departure.” (cubanews.acn.cu/cuba/)

Alarcón was a member of the Central Committee of the Party and of its Political Bureau.

Current Minister of Foreign Affairs Bruno Rodríguez Parrilla tweeted: “All our tribute to dear Ricardo Alarcón — in loyalty to the Revolution, the Party, foreign policy and the glorious tradition of @CubaMINREX.” (cubanews.acn.cu/cuba/)

Argentinian journalist Stella Calloni praised Alarcón’s legacy as brilliance and tenacity in facing today’s “global challenges, such as the imperialist and colonizing pretensions of some nations.” (Prensa Latina, May 6)

Calloni, who specializes in international issues, defined Alarcón as “an authentic communist militant, whose work will remain in the history of resistance in the world.” She particularly noted his “constant condemnation of the economic, commercial and financial blockade imposed by the United States on Cuba.”

In relation to this violation of human rights, she said, “Due to Cuba’s deep and creative diplomatic work, the number of countries calling for the lifting of that coercive policy is renewed and increased.”