Message from WW editors: We publish the article below about a demonstration in Madrid as part of celebrating the anniversary of the May 9, 1945, victory of the Soviet Union against Nazi-ruled Germany, marked by Germany’s unconditional surrender. Clarifying the history of World War II is always important for the working class, because the role of the world’s first socialist state was essential in victory over Nazi domination. It is even more important now because of the conflict provoked by the major imperialist powers, the U.S. at their head, against Russia.

Anyone who reads history or even historical novels knows that the Soviet victory in Stalingrad, where its defenders fought against the German offensive for 200 days between 1942 and 1943, was the first major setback for the Nazi-led German military and was the turning point of World War II. The Soviet victory in Stalingrad inspired resistance throughout all of German-occupied Europe.

Despite the loss of tens of millions of lives, the Soviet Red Army under communist leadership was able to open an offensive that pushed the German Wehrmacht out of lands it had occupied — first out of Soviet territory, including Russia and Ukraine, and then out of Eastern Europe. The U.S.-British alliance did not open a second front in Normandy until June 1944. At that time, U.S. and British imperialism had to fear that the Red Army might not stop at defeating Germany but might, with the help of local partisans, liberate Paris — and why not Madrid, too?

Today’s capitalist Russia is no longer the Soviet Union. Nevertheless, the peoples of Russia — along with many of the people of Ukraine — made their share of sacrifices for victory over Nazi Germany and have good historical reason to fear the surrounding of their country by NATO imperialism. 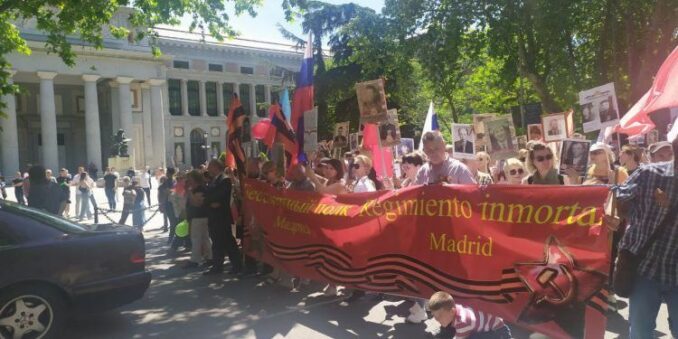 May 8. We have lived a historic day in Madrid.

This Sunday, May 8, for the seventh consecutive year, the March of the Immortal Regiment was called by the Russian community of Madrid and, this time, with the support of various political organizations and social movements.

The March, as every year, aimed to commemorate the Day of the Victory of the Red Army against fascism, concretized in the signing of the unconditional capitulation of the German army to the Soviet Union, as well as to honor the memory of the heroes and the 27 million deaths with which the Soviet people paid for their gigantic feat.

This year was very special.

The war propaganda and the denigration of everything Russian carried out by the “progressive” government [Socialist Party, Podemos, Environmentalists], repeated time and time again by all the major media, were creating a charged atmosphere.

All this was used by the large group of Ukrainian fascists, who, following the path of their counterparts in Ukraine, had been harassing with all kinds of threats anyone who defended and considered themselves part of the Russian culture and its language.

All this was exacerbated in the days prior to the March, which had been communicated to the Government Delegation and received a positive response, despite the pressure from the fascists, which even reached Queen Leticia (sic).

The Nazis called for a concentration at the place where the March was to begin, at the same time that it was forbidden.

The frenzy that was generated and the Russophobia carefully fabricated by the authorities dissuaded many people from attending. Even so, about 1,000 people,  filled the Paseo del Prado, tense and joyful and, above all, with the feeling of having fulfilled our duty. We were all conscious that we were putting into practice the ideals and objectives of those who preceded us and gave their lives in the struggle against fascism.

We were not just a handful of people from Madrid and from other cities of the Spanish State. We paraded proudly carrying the banner with the photo of the numerous Republican (anti-fascist) fighters fallen in the ranks of the Red Army, while we tried to accompany the beautiful songs of the Great Patriotic War.

Many things unite our peoples. Today, once again, we are united by the struggle against fascism and imperialism.