The following excerpts derive from a pamphlet written by Sam Marcy, the late Chairperson of Workers World Party.

The 1992 rebellion in Los Angeles was touched off by the racist verdict in the Rodney King beating case, but it elicited sympathy and participation from other oppressed communities. Sixty-three people, the majority Black and Latinx, died.

The entire pamphlet may be downloaded at workers.org/book/a-marxist-defense-of-the-l-a-rebellion/ 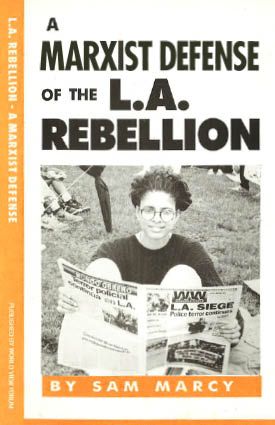 The brutal suppression of the Los Angeles insurrection offers a classic example of the relationship of bourgeois democracy to the capitalist state. All this has to be seen in light of the repressive forces amassed by the city, state and federal government: 8,000 police, 9,800 National Guard troops, 1,400 Marines, 1,800 Army soldiers and 1,000 federal marshals. (Associated Press, May 5)

Bourgeois sociology must leave out of consideration the fact that society is divided into exploiter and exploited, oppressors of nationalities and oppressed. The basis for both the exploitation and oppression is the ownership of the means of production by an ever-diminishing group of the population that controls the vital arteries of contemporary society. They are the bourgeoisie, the ruling class.

At the other end of the axis is the proletariat of all nationalities, the producer of all the fabulous wealth. Material wealth has been vastly increasing along with the masses’ productivity of labor. But only 1% of the population amasses the lion’s share of what the workers produce, while a greater and greater mass is impoverished. 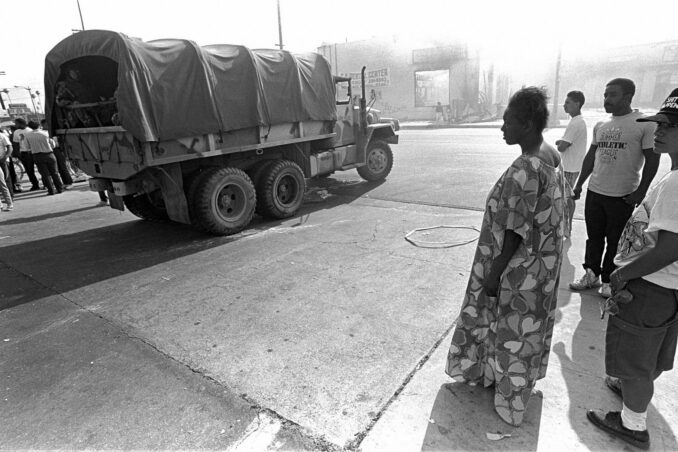 No amount of praise, no amount of flattery, can substitute for a clear-cut delineation of the class divisions that perpetually rend society apart.

Their rising, as in Los Angeles, is what Karl Marx called the locomotive of history. Their revolutionary struggle accelerates history, bringing to the fore the real character of the mass movement.

One cannot apply Marxism to any meaningful extent without first recognizing the existence of national oppression — the oppression of a whole people by capitalist imperialism. This is one of the most characteristic features of the present world reality.

This concept above all others must be kept foremost, if we hope to understand what has happened in Los Angeles and in other major cities of this country.

What is the state? What is democracy?

The insurrection and the way it is being suppressed closely follow the exposition by Frederick Engels in his book “The Origin of the Family, Private Property and the State” and later brought up to date by Lenin in “State and Revolution.”

Bourgeois sociologists and scholars, and above all capitalist politicians, always confound the relationship between the two. They often treat them as a single phenomenon. In reality, the relation between democracy and the state is based on an inner struggle — between form and essence.

The state can take on many different forms. A state can have the form of a bourgeois democracy; it can be a monarchy; it may be ruled by a military junta. And in modern society, on the very edge of the 21st century, it may have a totalitarian or fascist form.

Whatever its form, its essence is determined by which class is dominant economically and consequently also dominant politically. In contemporary society, this means the rule of the imperialist bourgeoisie over the proletariat and the oppressed nationalities.

The bourgeoisie cannot maintain its class rule by relying solely on one particular form of the state. Under such circumstances, should there be an imperialist war or a deep capitalist crisis that leads to ferment among the masses, the bourgeois state would be vulnerable to revolutionary overthrow.

But the state is not just the officialdom — who presume to govern in the interest of all the people. The state in its essential characteristics is the organization, to quote Engels, of a “special public force” that consists not merely of armed men and women but of material appendages, prisons and repressive institutions of all kinds.

Most noteworthy are the prisons calculated to break the spirit of millions of the most oppressed, while pretending to have some mock forms of rehabilitation. All the most modern means — mental and physical — are used to demoralize and deprave the character of those incarcerated. These repressive institutions, this public force, appear so omnipotent against the unarmed mass of the oppressed and exploited. But it stands out as the very epitome of gentility and humaneness when it comes to incarcerating favored individuals, especially the very rich, who have transgressed the norms of capitalist law.

In general then, the Los Angeles insurrection shows that democracy is a veil that hides the repressive character of the capitalist state. The state at all times is the state of the dominant class. And the objective of the special bodies of armed men and women is to secure, safeguard and uphold the domination of the bourgeoisie.

Engels explained that in the course of development of capitalist society, as the class antagonisms grow sharper, the state — that is, the public force — grows stronger.

The sharpening of class and national antagonisms had even then resulted in larger and larger appropriations for civilian and military personnel employed for the sole purpose of suppressing the civil population at home and waging adventurist imperialist wars abroad. The state grows in proportion as class and national antagonisms develop. Democracy is merely a form which hides the predatory class character of the bourgeois state. Nothing so much proves this as the steady and consistent growth of militarism and the police forces in times of peace as well as war.

The ruling class continually cultivates racism to keep the working class divided in order to maintain its domination. This is as true at home as it is abroad. The forces of racism and national oppression have been deliberately stimulated by Pentagon and State Department policies all across the globe.

After every stage in the struggle of the workers and oppressed people, there follows an ideological struggle over what methods the masses should embrace to achieve their liberation from imperialist monopoly capital. There are always those who abjure violence while minimizing the initial use of violence by the ruling class. They denounce it in words, while in deeds they really cover it up.

Yes indeed, they readily admit the verdict in the Rodney King beating was erroneous and unfair. But — and here their voices grow louder — “The masses should not have taken to the streets and taken matters into their own hands.” Their denunciation of the violence of the ruling class is subdued and muffled — above all it is hypocritical, a sheer formality. It’s an indecent way of seeming to take both sides of the argument, when what follows is in reality a condemnation of the masses.

The Marxist view of violence flows from an altogether different concept. It first of all distinguishes between the violence of the oppressors as against the responsive violence of the masses. Just to be able to formulate it that way is a giant step forward, away from disgusting bourgeois praise for nonviolence. It never occurs to any of them to show that the masses have never made any real leap forward with the theory of nonviolence. Timidity never made it in history.

Indeed, Marxists do prefer nonviolent methods if the objectives the masses seek — freedom from oppression and exploitation — can be obtained that way. But Marxism explains the historical evolution of the class struggle, as well as the struggle of oppressed nations as against oppressors.

As Marx put it, “force is the midwife to every great revolution.”

None of the great revolutions has ever occurred without being accompanied by force and violence. And it is always the oppressor — the ruling class and the oppressing nationality — that is most congenitally prone to use force as soon as the masses raise their heads. Does not the bourgeoisie, once it has tamed the proletariat at home, use force and violence through its vast military armada to more efficiently exploit and suppress the many underdeveloped nations throughout the world?

While it might seem that in Los Angeles national oppression alone is involved, in reality it derives from the class exploitation of the African American masses dating back to the days of enslavement.

How interesting that technology everywhere displaces labor, reducing the number of personnel.

The truth is that the development of higher and more sophisticated technology under capitalism doesn’t contribute to the welfare of the masses but, on the contrary, throws them into greater misery.

But the opposite trend prevails in the police forces. This is an absolutely incontestable fact.

At one time the police patrolled the streets on foot. Maybe they used a public telephone for communications with headquarters. Today they are equipped with sophisticated gear. They ride either on motorcycles or in police cars or helicopters. They communicate by radio.

All this should reduce the number of police. But the trend is quite the contrary: to increase the forces of repression. This is not geared to productivity as in industry. Their growth is geared to the growth of national antagonisms, the growth of racism and the bourgeoisie’s general antilabor offensive.

In Los Angeles, the bourgeoisie is forced to bring in federal troops to assist city and state authorities. The social composition of the Army is not just a cross section of capitalist society. The Army and Marines, especially the infantry, have a preponderance of Black and Latinx soldiers.

In Los Angeles the local police and state forces were inadequate. Only because the masses were unarmed was the bourgeoisie able to suppress what was in truth an insurrection — a revolutionary uprising.

As Marx would put it, such a rising is a festival of the masses. The incidental harm is far outweighed by the fact that it raises the level of the struggle to a higher plateau. The wounds inflicted by the gendarmerie will be healed. The lessons will be learned: that a spontaneous uprising has to be supported with whatever means are available; that a great divide exists between the leaders and the masses.

No viable class or nation in modern capitalist society can hope to take destiny in its own hands by spontaneous struggles alone. Spontaneity as an element of social struggle must beget its own opposite: leadership and organization. Consciousness of this will inevitably grow.