The author is chairperson of the parliamentary group of Die Linke (The Left Party) in the Foreign Affairs Committee of the German Bundestag (lower house) and its spokesperson for international politics and disarmament. This article was published in Junge Welt, April 29. Translation: John Catalinotto. 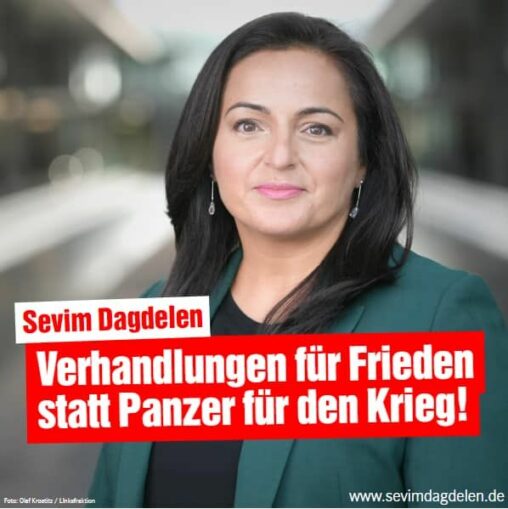 On April 28, 2022, the Bundestag [German parliament] decided that Germany would de facto enter into war with Russia. With a motion, the Christian Democratic Union (CDU), Social Democrats (SDP), Free Democrats (FDP) and Greens constituted themselves as a war coalition.

In speeches, numerous members of this Alliance for the Ukraine War, led by the chairman of the CDU/CSU parliamentary group, Friedrich Merz, promoted the goal of a military victory for Ukraine, which they said Germany must support unconditionally.

This break with all the military taboos that grew out of the defeat of German fascism in 1945, and its dangerous consequences, were somewhat alarming to the deputies. In a kind of defensive magic spell, the proposal states right at the beginning that “neither Germany nor NATO will become a party to the war.”

But the delivery of ever more and ever heavier weapons and the call for a victorious peace against Russia make these incantations seem extremely questionable. These people remind us of someone who draws a square, but writes in the accompanying text to the drawing that the viewer should see a circle here. Surreal and dangerous.

In addition to the de facto entry into the war via the delivery of heavy weapons and training of Ukrainian soldiers to use them, they have put in the foreground the unconditional will of a total economic war against Russia. In the process, the battle zone is being increasingly expanded. China is openly threatened with being caught in the West’s crosshairs if Beijing tries to undermine Western sanctions against Russia.

Language can be treacherous in this regard. In neocolonial fashion, the motion says the German government must “emphatically communicate to the People’s Republic of China the expectations of Germany and the European Union.”

Respect for the U.N. Charter — all gone. The war coalition is openly threatening. Its language is one of violence and threats. Russia is to be pushed to the wall, even if this means a world economic war even against China.

The problem of this new German militarism remains the recalcitrance of the German population, the majority of which rejects the delivery of heavy weapons and, according to a survey in “The Spiegel,” the majority of which has no desire to starve and freeze for war. This attitude must be expanded to fight the war coalition’s entry into the war.