Faced with evictions on July 8, residents of Philadelphia’s University City Townhomes and their supporters converged on the offices of Daniel Killinger, president of National Real Estate Development in a surprise visit April 22. The company has expressed interest in purchasing the property the homes exist on from the current owner, Altman Management Company. 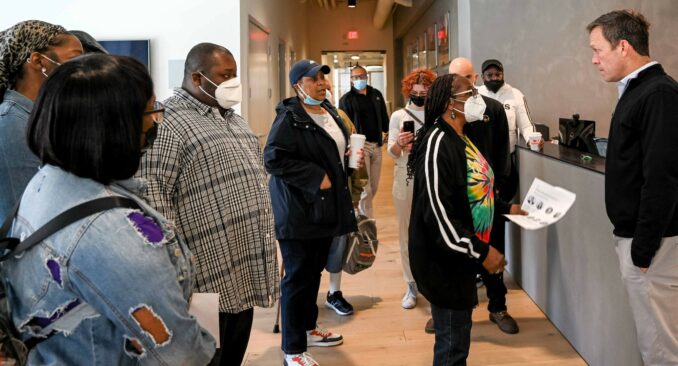 The activists handed a letter to Killinger that explained any decision to displace over 68 families, including many children, elderly and disabled residents, would lead to a public campaign charging that his company is “in the business of displacing low-income families for profit.”

They requested that before National Real Estate proceeds with purchasing the property, Killinger meet again with residents. After the impromptu meeting ended, participants joined a protest on the sidewalk in front of the Center City office building, alongside a banner that read “Save the UC Townhomes!”

Earlier in April, many of the same residents and housing rights activists paid an office visit to Altman Management in West Philadelphia. They demanded Brett Altman offer them the choice of relocating to one of his 20 other West Philadelphia properties.

Penn students disrupted a public event where University of Pennsylvania President Wendell Pritchett was speaking. Protesters won a promise from Pritchett that she would attend a meeting with Townhomes representatives to talk about what UPenn can do to help support low-income residents.

The Save the UC Townhomes Coalition website explains why they organized these protests:

“The UC Townhomes is a 70-unit Low Income Housing Tax Credit (LIHTC) development built in 1983, located at 3900-90 Market St. in the West Philadelphia neighborhood known as the Black Bottom, an historically Black neighborhood displaced in the late 1960s through the City government use of eminent domain to make way for what is now known as ‘University City.’ The townhomes, with land bought from the city for $1 after the Rizzo administration found itself in federal court for housing discrimination in locating section 8 sites, were built, and are still owned by IBID Associates, a subsidiary of the Altman Group.

“On July 8, 2021, owner Brett Altman informed the Department of Housing and Urban Development (HUD) that it would not renew its federal tax subsidy and would put the property up for sale on July 8, 2022. Local business reporting estimated the sale price at upwards of $100m.

“UC Townhomes tenants were given notice that they would have to move by July 8, 2022.” (savetheuctownhomes.com/about/)

Their struggle is part of a larger fight by Black, Brown and low-income Philadelphians to keep their homes in the poorest big city in the U.S., as gentrification increases. (bit.ly/3OKTAT4)

Tens of thousands of units of subsidized housing are vanishing, as developers make huge profits by displacing historically Black communities. The banks, construction and gentrification companies rehab older buildings or tear down and build larger structures of apartments or condos. Disproportionately impacting Black neighborhoods, the new homes are resold or rented at prices out of reach of previous residents.

Starting in the 1930s, banks and insurance companies refused to provide mortgages or insurance to homes in neighborhoods they claimed had “blight, high crime and neglect.” The policy came to be known as “redlining” with African Americans and immigrants populating these bank-designated “red zones.”

Redlining was supposedly outlawed in 1968, but its legacy remains. In 2019 47% of Black families in Philadelphia were homeowners compared to 59% of white families.

When Black families do manage to own the property where they live, the racist housing industry undervalues their homes. According to Theresa Singleton of the FRBP, nationally, “owner-occupied homes in Black neighborhoods are undervalued by as much as $48,000 per unit, and that reflects about $156 billion in lost wealth for those homeowners.”

Kia Ghee, executive director of the Philadelphia Commission on Human Relations and Fair Housing Commission asserts, “Home appraisers are going out to a home that’s substantially the same — maybe sometimes even the same home with different owners,” she said. “When it was owned by a white family, it was valued at ‘X’ amount and then devalued significantly when a Black family was in possession of that home.” (bit.ly/3s3wrS9)

About 25% of Philadelphia’s population lives in poverty. Some are unemployed; many are working but underpaid. With Pennsylvania’s minimum wage at $7.25, low-wage workers cannot save enough from their paycheck-to-paycheck jobs to afford a down payment or pay closing costs on buying a home.

UC Townhomes residents cannot afford to buy new homes and are fighting any evictions. But if they are displaced, they demand just compensation: $500,000 per family, amounting to 35% of the total sale price. That figure reflects the current prices for the most modest housing in University City.

The website explains why their demand is just: “Given the history of the land being twice stolen, once from Indigenous peoples during colonialism, and once from the Black homeowners of the Black Bottom in 1968 through eminent domain, we demand financial compensation for all residents being forced from their homes. Brett Altman’s family, having received the land for $1 and benefiting from 40 years of state and federal financial assistance in the form of tax credits and housing subsidies, now stands to sell the same land for up to $100 million.”