It was a spirited rally in City Hall Park, April 28, which expressed the anxiety that hundreds of thousands of New Yorkers are feeling about their homes and caught the attention of the press. The rally called by Community Action for Safe Apartments featured Chinese, Spanish and English speakers, and it was militant. 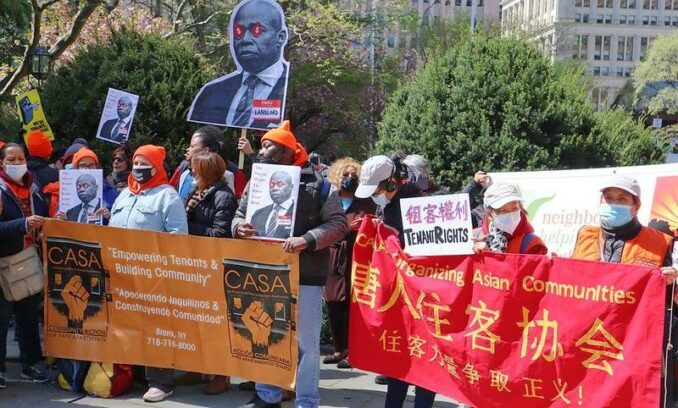 Nearly a million apartments in New York City are covered by rent stabilization, which means their landlords are limited in raising the rent when the lease expires. This is the largest concentration of stabilized rental units in the United States.

The Rent Guideline Board (RGB), nine people appointed by the mayor, sets the rates. For the past decade, they have ranged from 0% to 1.5% for a one-year lease and no more than 2.5% for a two-year lease.

The RGB currently is considering raising the rates by 4.5% for a one-year and slightly less than 9% for a two-year.

There are at least 190,000 eviction cases in NYC courts, which are backed up because of moratoriums imposed while COVID-19 was raging. It’s clear that the sharp increase in rent proposed by the RGB will drastically increase the number of evictions.

The RGB will make its final decision by the middle of June. The struggle is not over, and it definitely will grow.