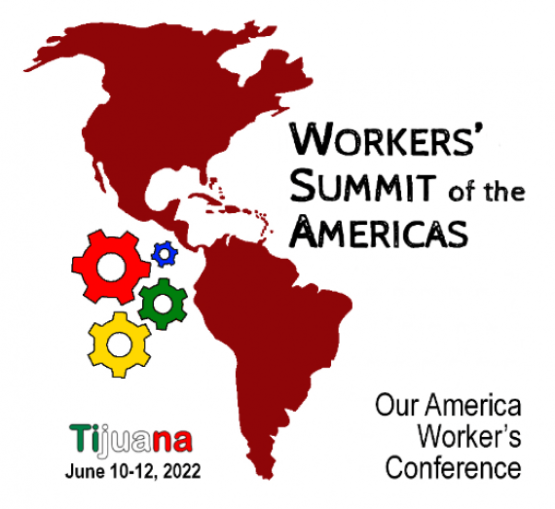 The Tijuana Workers Summit of the Americas is scheduled for June 10-12. Organizers held a April 29 webinar to promote the Summit, which included the speakers below.

We are honored to be a part of this timely and historic launch for this Workers Summit, a class answer to the summit of the thieves.

Our union, since we founded it 48 years ago, has always felt that an injury to one is an injury to all. It’s a global concept: internationalism.

Our enemy is a common enemy. We were proud to work with many of you around the question of freedom for Alex Saab, the Venezuelan diplomat. In violation of every international law, U.S. imperialists orchestrated his kidnapping and have held him to this day. So we are aware and have fought against these criminal sanctions that really target the people. We stand with our Cuban siblings and the Venezuelans.

U.S. imperialism has many weapons in its arsenal. They will try to assassinate leaders. They will invade countries. They will do regime change. We believe that the answer to all of this is to globalize solidarity. Meetings like what we are planning in Tijuana are an important step toward building solidarity in action, to be able to show it to our enemies, those who wish to eliminate all that is progressive — what we believe the workers’ movement has snatched from the grip of imperialism. That’s what Cuba is. That’s what Venezuela is.

We look forward to doing all that we can to make the summit successful and deepening the organizational roots of solidarity.

Alison Bodine, The Fire this Time

The Summit of the Americas is not in any way an expression of the peoples of the Americas. The voices of Cuba, Venezuela and Nicaragua are being excluded, as well as the voices of poor, working and oppressed people across the Americas, suffering under the boot of U.S. imperialism at home and abroad. Now more than ever, we must work together to build a united front against U.S. imperialism, against U.S. sanctions and blockades, against U.S. military bases and the expansion of NATO into Latin America and the Caribbean, while also building the fight against all forms of U.S. imperialism, including racism, sexism and homophobia at home in the United States or Canada.

The [Canadian] government is complicit in U.S.-led wars and sanctions against people in Latin America, the Caribbean and around the world. For example, the recent elections which took place in Venezuela and Nicaragua, transparent democratic elections that I was honored to be able to observe on the ground, were both denounced as undemocratic by the Government of Canada. The Government of Canada has also participated in the assaults on Latin American countries through sanctions on Nicaragua, Venezuela and supported things such as the coup in Bolivia and going all the way back to the coup in Haiti in 2004.

The Fire this Time movement for social justice invites and encourages all people that believe in a better and just world to join in the Workers Summit of the Americas.

The meeting in Tijuana is an opportunity to have a class response, a worker’s response to U.S. imperialism, which is hosting a conference which is intended to increase in every way the level of pressure on all the peoples of the Americas to enforce ever harsher sanctions.

To do this on the eve of May Day shows that we are thinking about the international workers struggle. I want to ask that we think of the most helpful ways in which we can build for the conference in Tijuana, so that we come with demands, with petitions prepared, with statements from our organizations and that we’re listening to the meeting that is being organized in Los Angeles. This “Summit of the Americas” is a meeting of gangsters. And they are the same ones who are making war on the working class right here in the United States but have again and again invaded, sanctioned, assassinated workers and leaders throughout the Americas.

The International Action Center is very proud to be part of hosting the conference.