It is evident that the U.S./European Union wants to prolong the war in Ukraine as long as possible. But warmongering is also evident at the other end of the planet: The U.S. is repeating the Ukraine script in Taiwan. 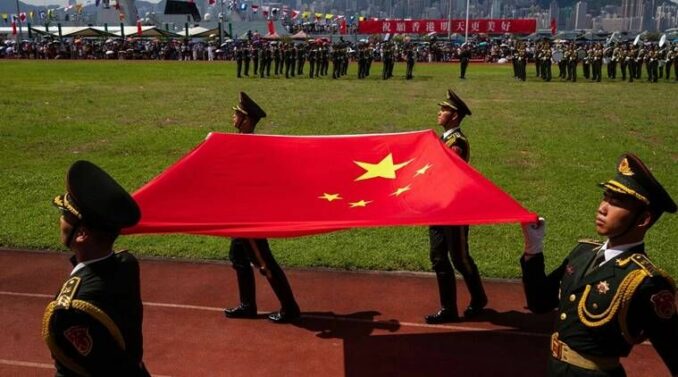 Soldiers of the People’s Liberation Army of China with their country’s flag.

Contrary to the words of respect for China’s territorial integrity uttered during the video-summit between Presidents Xi [Jinping] and [Joe] Biden in March, the Speaker of the House of Representatives and third in the U.S. hierarchy of power, Nancy Pelosi, announced a visit to Taiwan, which was postponed, allegedly by COVID-19. A week later, six U.S. legislators “from the military, intelligence, foreign affairs, justice and finance committees” (globaltimes.cn, GT, April 15) visited the Chinese island, including the hawk of all wars, Lindsey Graham. Already in March there was a visit by senior U.S. military and intelligence officials.

While the flames of war are burning in Ukraine, it would seem logical not to instigate new hotbeds of conflict. That’s how it would be if decadent imperialism did not want war. But it does. And just as it pushed Russia into the Ukraine war, it is trying to push China into a war over Taiwan.

The Global Times states that “the deceptive nature and duplicity of U.S. policy toward China is fully exposed.” (GT, April 9) The Chinese Minister of Foreign Affairs demanded that Pelosi not only postpone, but cancel the visit. (GT, April 9)

The Chinese response also took the form of military maneuvers, which the April 15 GT describes thus: “The People’s Liberation Army is ready for combat and will take all necessary measures to resolutely crush any attempts at interference by external forces and secessionist initiatives [. . .] so as to preserve national sovereignty and territorial integrity.”

Meanwhile, the U.S. strives to destabilize Pakistan and threaten India, “guilty” of not going along with the strategy of sanctions and warmongering against Russia. (GT, April 12)

Militarism is always accompanied by lies and authoritarianism. Público, the newspaper of Big Capital that has defended all the wars of imperialism, including the invasion of Iraq, is indignant at those who raise suspicions about war propaganda. Suspicions [were] expressed by the former U.S. and U.N. disarmament inspector, Scott Ritter, who directly witnessed Iraq’s lies. Ritter claims to be convinced that the Bucha massacre was a provocation, in which “the Ukrainian National Police murdered Ukrainian civilians,” then blamed “the Russians.” (consortiumnews.com, April 13) For arguing that position, he was suspended from Twitter.

Those who think that censorship is due because of the Ukraine war should remember Julian Assange, arrested in Britain long before Ukraine, for exposing the crimes and lies of imperialist wars. War and lies are in the DNA of the system — which today threaten to lead humanity into catastrophe.