A march calling for reunification of Korea and an end to U.S.-South Korea war games rallied in New York City on April 23. The protest began at Dag Hammarskjold Plaza with chants of “Stop the U.S. war machine from North Korea to the Philippines,” “No more war drills” and “End the Korean War — 70 years is enough.” People proceeded to the Republic of Korea Permanent Mission to the United Nations and then formed a human chain to the Permanent Mission of the Democratic People’s Republic of Korea to the U.N. to unite the two Koreas. 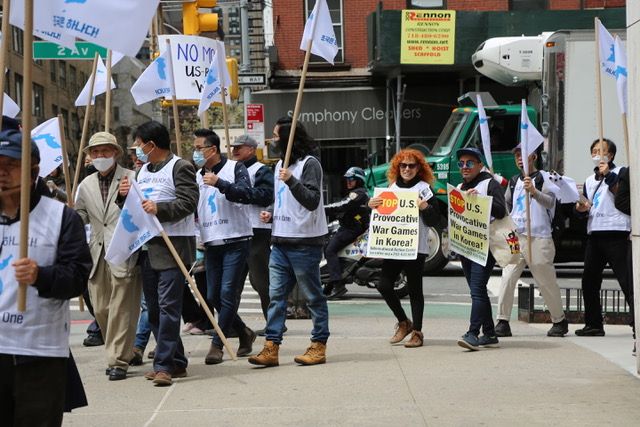 “Since our division in 1945, we’ve always had one dream to reunite Korea,” one of the organizers told the crowd. But, they added, U.S. war games, which take place several times a year on the Korean Peninsula, are “driving 80 million Koreans to fear and despair, destroying any hope for inter-Korean relations.”

Sara Flounders, co-director of the International Action Center, said it is U.S. missiles, bases and war games, which are really U.S. war threats, that maintain this division: “The whole world owes a debt to the Korean people because they have proven that it’s possible to resist U.S. imperialism; it’s possible to rebuild, to stand strong and stand together.”

The event was organized by the 615 N.Y. Committee for Reunification of Korea with the support of numerous organizations, including the International Action Center and Workers World Party.