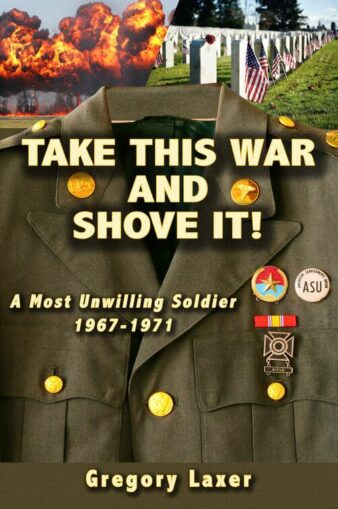 That Greg Laxer, who most of us in the American Servicemen’s Union office circa 1968 knew as “the Shadow,” should write and publish a memoir of that period, is no surprise. Like the more famous “Shadow” — the old-time radio-drama namesake of his protective pseudonym — he “knew the evil that lurked” in the hearts of Pentagon generals, and he was ready to expose it to the world.

Even in 1968, Laxer had a reputation of being the most stubborn of a spiny group of determined iconoclasts in the ASU, a characteristic vital for writing and producing a book about his experiences.

Laxer was one of a group of antiwar heroes this reviewer had the privilege to know and/or work with, those at the visible apex of the iceberg of resistance in the ranks of the military, those who were among the first to resist and keep resisting. What these leaders represented terrified the Pentagon’s officer corps — at least those capable of understanding the politics of what was happening — who finally decided they wanted a professional army.

To be effective and worthwhile, a historical memoir must be honest, as accurate as possible, and it should take the readers through the same voyage the author took, exposing the author’s feelings at each moment of crisis.

Besides accomplishing this, Laxer’s memoir is a valuable and fascinating political, literary, musical and psychedelic voyage through the 1960s, written by an acute observer of his own voyage, as seen looking backward 50 years later.

What helps Laxer’s memoir succeed is his access to an excellent source of personal and chronological truth. During much of the time he was in the U.S. Army, 1967-71, Laxer wrote letters to his parents. His mother kept and stored the letters. As a resource, they are better than a journal and far better than the coverage by the U.S. corporate media.

Not that he always told all the truth to his parents. No, but as he reread them for the memoir, he remembered what he was hiding from them or why he was doing it, which was mainly to protect them from his pain. He remembered how he felt when he wrote them. The reader who pays attention will feel it too.

In a letter to his parents at the time of his first confrontation in the Army, Laxer wrote that his attorney “thought accepting the Article 15 wouldn’t be a bad idea, but I said it would equal abject surrender. I convinced him that he couldn’t dissuade me from making a stand at a trial.” (p. 102)

Laxer displayed his stubbornness repeatedly in his memoir. Other antiwar soldiers might have accepted their lawyer’s advice to plead guilty to a minor infraction, instead of forcing a court-martial they were doomed to lose. Laxer never accepted what appeared to be a practically wise tactic if he believed it violated his principles.

While getting experience as a medic at Valley Forge General Hospital in Pennsylvania in 1969, Laxer had to fill out a form for the $5,000 insurance payment in 1969 should he be killed in combat. He wrote, “I designate as my beneficiary ‘The National Liberation Front of South Vietnam.’” (p. 117)

From the family letters you can find a bibliography of revolutionary ideology that Laxer devoured during those years. Marx, Lenin, Malcolm X and Franz Fanon were on the list. Anyone interested in the music of that period would find an equally impressive discography of the protest musicians, jazz players, composers and other popular artists of the time.

At the start of his Army experience, Laxer was a committed pacifist. After a few years of reading and the direct contact with Pentagon reality, his voyage led him to understand the necessity for oppressed peoples and nations to resist U.S. imperialism, with arms if necessary. His pantheon of heroes included Ho Chi Minh.

Always short on money — most of which he spent on books and records — to get a ticket to Hawai’i and join the sanctuary struggle there in August 1969, the AWOL Laxer typed an authentic-looking military order to report to Honolulu and used it to board a flight.

He was present at some of the biggest struggles in the military during his four years, from Oahu, Hawai’i, to Fort Ord, California, to the Fort Dix Stockade in New Jersey. Anyone who wants to learn how the Vietnam War affected this individual — and many different personalities who made a similar voyage — should pick up this memoir.

Catalinotto was circulation manager for The Bond, the newspaper of the American Servicemen’s Union from 1968-70, and is author of “Turn the Guns Around — Mutinies, Soldier Revolts and Revolution.”