April 16 – Multiple organizations forming the Coalition to Shut Down ICE in Georgia have been giving special attention to the expansion of the Folkston ICE facilities in southeast Georgia, close to the Florida border. 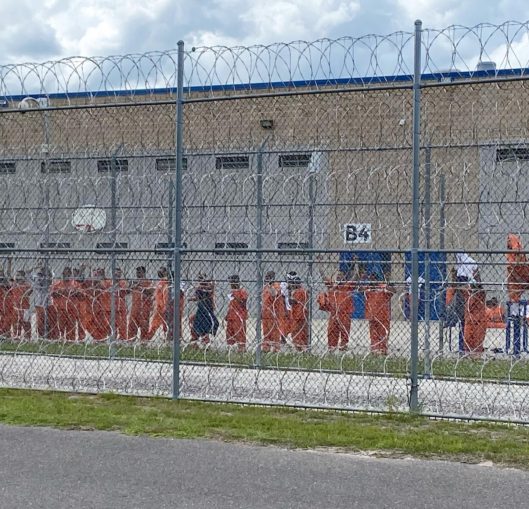 Although the Biden administration had said it would no longer issue contracts to private prison operators, the GEO Group has been authorized to expand its Folkston site to some 3000 beds. This would be the largest detention center for immigrants in the U.S.

The Coalition organized a multi-faceted event on April 16 to protest expansion of the prison for profit. There was a family-friendly event with food and games for children in a downtown Folkston park, and also a protest across the street from the ICE facility.

To everyone’s surprise, several dozen detainees, who were in the exercise yard and saw demonstrators arrive with banners and signs, went to the fence with fists up. For 90 minutes, they chanted and exchanged information with their supporters, who learned there was a hunger strike going on to protest the inhumane conditions.

Coalition members – who had come from across Georgia and north Florida – left inspired by the resistance of the detainees and vowing to redouble efforts to “Shut Down Folkston!”