The capitalist class is “reopening” the international economy, harming many workers. Controls that significantly limited the spread of the coronavirus – like masking, vaccines and testing – are being stopped. Funds for controls are being cut. A paltry $15 billion to provide funding for vaccine boosters and treatments is blocked in the U.S. Congress. 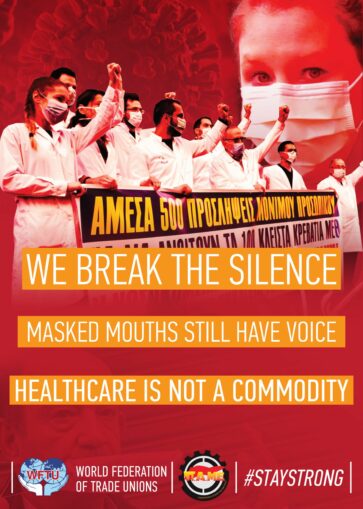 The working class of all capitalist countries in the developing world is left almost defenseless against the surge of the COVID-19 Omicron and other new variants.

In the U.S., the federal government is cutting back on testing. Many testing centers have closed down; others hike prices in response to the end of government-subsidized testing programs.

People rely on at-home tests, with results rarely reported. Without widespread and public testing, it is next to impossible to detect a surge in the coronavirus until too late to take measures to minimize damage.

This is nothing but an abandonment of the workers once again by the capitalist class.

Socialist vs. capitalist approach to health

The Peoples’ Republic of China is summoning all resources to put up a fight against a new Omicron variant in Shanghai. When you see responders in medical overalls delivering food packages everywhere, you’re seeing a society willing to put itself on war footing to defend the lives of the working class against the virus.

Xenophobic criticisms of China by the bourgeoisie deny the fact that the Chinese are saving lives while over a million people in the U.S. have died and 6 million people – at least – have died worldwide of COVID-19.

A March 10 article in the Lancet medical journal estimates as many as 18 million people may have died worldwide. China, with a full public mobilization and a socialized healthcare system, has had fewer than 5,000 deaths due to COVID-19. (worldometers.info)

This is the difference between a capitalist and a socialist approach to health.

The new Omicron BA.2 variant is triggering an uptick in cases in the U.S. and Europe. Will this be the only new variant? Or will a variant come that evades vaccines and sends the U.S. back into pandemic doldrums? The scientists have no definite answers.

Capitalists politicians – who have acted cluelessly in addressing the pandemic – especially have no answers.  How many times have they stumbled by “reopening” the economy, causing great suffering?

The virus – with 800 deaths a day in April in the U.S. – is adaptable to changing circumstances. In addition, the protections given by vaccines drop over time, and some of the newest variants seem able to evade the vaccine protection. (New York Times, April 11)

Is there any national plan to defend the working class in the U.S. against an invasion of a new wave of the virus? No. Both Democrats and Republicans are very resistant to going back to lockdowns, mask mandates or even new funding.

Instead of a battle plan against COVID-19, U.S. imperialists are financing super-expensive weapons for a proxy war with Russia. The misdirection of money to the military budget from health care is not worrying the imperialists. Whether people in the U.S., Ukraine and Russia die en masse of COVID-19 is no concern of the capitalists.

The bosses need to “open” the economy. They will put profits before people to beat competitors and make workers go back to work. The capitalist system requires banks and corporations to make big profits every single quarter of the year. They will open the schools despite dangers to students since schools produce future workers. The capitalists have to open the economy up, because otherwise the whole economic system will begin to crash.

The contradiction the bosses face is that the U.S. working class has suffered from a million deaths and 80 million COVID-19 illnesses. This unprecedented suffering and grief has led to massive worker resistance to the dictates of the bosses for hard work and drudgery with low wages.

Worker organizing with strikes and other workplace disruption has been taking place throughout the pandemic. The Great Resignation of the working class leaving oppressive work will continue. Four million workers have quit their jobs every month since July 2021. (Fortune, Feb. 1)

Sometimes it can seem that workers have lost their voices about how to deal with the pandemic. But their actions speak louder than words.