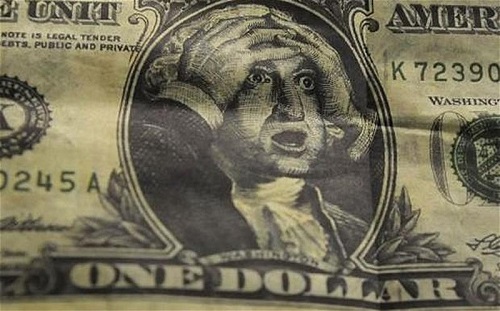 Is there a global movement underway to ditch dependence on the U.S. dollar? Is the world witnessing the end of U.S. economic hegemony?

The prospect of de-dollarization of the global economy has been studied by economists for some time. Most admit it was not a matter of will it happen, but when. Since 2000, U.S. control of global exchange has been falling. The 2008 U.S. economic recession accelerated this process as more countries questioned investing in risky U.S. markets.

Expanding U.S. sanctions are fueling a rapid shift in global currency exchange that threatens the hegemony of the dollar. The latest U.S. sanctions aimed at Russia may be the tipping point, because many countries will lose so much economically by obeying the sanctions that they are refusing to obey them. In addition, by seizing funds of countries that have invested in dollars held in imperialist banks, the U.S. has forced countries to rethink how to store their reserves.

An International Monetary Fund report on March 24 found “a decline in the dollar share of international reserves since the turn of the century.” Over 46 central banks have increasingly diversified their holdings. The IMF’s study revealed that the dollar’s decline did not mean increased use of the pound sterling, yen, or euro – but of the official currency of the People’s Republic of China — the yuan renminbi.

Gold standard and the dollar

As World War II ended, U.S. imperialism dominated the global economy, holding most of the gold and serving as the world’s creditor. At a meeting of 44 countries in Bretton Woods, New Hampshire, in 1944, participants agreed to fix their currencies to the dollar, which in turn was fixed to gold at $35 an ounce.

Until 1971, the U.S. kept the dollar price of gold fixed and adjusted the supply of dollars to maintain confidence in future gold convertibility. Facing massive debt from the war in Vietnam, U.S. President Richard Nixon took the dollar off the gold standard in August 1971, to avoid draining U.S. gold reserves.

In “The Coming Global Financial Revolution,” Ellen Brown notes: “The value of the dollar then plummeted relative to other currencies on global exchanges. To prop it up, Nixon and Secretary of State Henry Kissinger made a deal with Saudi Arabia and the OPEC countries that OPEC would sell oil only in dollars, and that the dollars would be deposited in Wall Street and City of London banks.  In return, the U.S. would defend the OPEC countries militarily.” (Scheer Post, April 5)

Other countries still holding large reserves of U.S. dollars ended up investing in U.S. Treasury bonds, used in turn by the U.S. to finance their military bases around the world. Interviewed in Popular Resistance March 29, economist Michael Hudson explained: “So basically [foreign] central banks have to keep their savings by weaponizing them, by militarizing them, by lending them to the United States, to keep spending abroad….

“If the way you have dollar hegemony is to have other countries deposit money in your banks and handle their oil trade with each other by financing it in dollars, but all of a sudden you grab all their dollars and you don’t let them use U.S. banks to pay for their oil and their trade with each other, then they’re going to shift to a different system.”

Heads of oil-rich countries, Saddam Hussein in Iraq and Muammar Gaddafi in Libya attempted to establish a new gold-backed financial system separate from the IMF.  Both Iraq and Libya faced sanctions. Both leaders were vilified and executed or assassinated.

The U.S. and Britain invaded Iraq in 2003. The U.S. and NATO bombed Libya. Now President Joe Biden has publicly called for Russian President Vladimir Putin to be removed from office.

Washington imposed sanctions on Russia and is forcing other countries, particularly allies in the European Union, to reconfigure their economies to abide by these extreme economic penalties.

After initially taking a serious hit to their economy with a significant drop in the value of the ruble, Russia has been taking measures to rid itself of dollar-based assets under U.S. control.

Russia is one of the world’s largest exporters of oil, gas, wheat, and fertilizers.  Since Russia’s normal trading partners still need commodities from Russia, they now seek alternative payment currencies to the dollar, including the Russian ruble, the Chinese yuan, and the Indian rupee. They must do this to evade U.S. and EU sanctions.

Hudson stated: “This is a war to lock in [U.S.] allies so they cannot trade with Russia. They cannot buy Russian oil. They must be dependent on [U.S.] American oil for which they will have to pay three or four times as much.” He notes that if not allowed to buy fertilizer from Russia, countries must either pay more for U.S. liquified natural gas or experience 50% crop failures.

Many countries not currently under U.S. sanctions are refusing to comply with the sanctions imposed on Russia.  They include Brazil, India, China, and South Africa which with Russia comprise the BRICS countries.  China and Russia have boosted bilateral trade in each other’s currencies.

Over 40 countries, which together hold one-third of the world’s population, face economic sanctions imposed by the U.S.  To circumvent U.S. sanctions, many of these countries are developing new exchange programs. This includes signing up with China’s Belt and Road Initiative development programs. Many sanctioned countries receive shipments of needed fuel and grain from Russia.

Many countries not currently under sanctions are refusing to comply with U.S. and EU sanctions imposed on Russia. Countries including India, Pakistan, Bangladesh, Indonesia, South Africa, Kenya, Tanzania, Turkey, United Arab Emirates, Saudi Arabia, Qatar, Brazil, Argentina, Bolivia and Mexico have refused to submit to U.S. measures that damage their own trade relations.

In an interview with The Cradle, April 15, Russian economist Sergey Glazyev stated: “Transition to the new world economic order will likely be accompanied by systematic refusal to honor obligations in dollars, euro, pound, and yen. In this respect, it will be no different from the example set by the countries issuing these currencies who thought it appropriate to steal foreign exchange reserves of Iraq, Iran, Venezuela, Afghanistan, and Russia to the tune of trillions of dollars.

“Since the U.S., Britain, EU, and Japan refused to honor their obligations and confiscated the wealth of other nations which was held in their currencies, why should other countries be obliged to pay them back and to service their loans?” (cradle.co)