The joint call to action is signed by Starbucks Workers United and Amazon Labor Union.

In the last few months, there has been an explosion of workers across the country coming together to organize for the first time. Many other workers, who already belong to unions, have been fighting for better contracts. 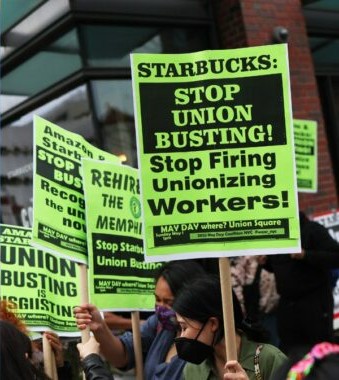 Protest/press conference at luxury residence of Starbucks CEO, Howard Shultz, New York City, April 14. The action was called by Workers Assembly Against Racism, a main initiator of May Day at Union Square.

Through the COVID-19 pandemic, we have seen working class people on the front lines struggling to get by, while corporations make off with unprecedented profits. As corporations grow richer and the cost of every day living rises, conditions for workers deteriorate. Many of us say enough is enough – we want better conditions, better pay and a say in our workplace.

Workers built these companies and their fortunes, and we are simply demanding to have a real voice in our workplace. However, this modest demand is met with ruthless union-busting campaigns from companies like Starbucks and Amazon. We have faced firings, threats, intimidation, lies and slander. We have been retaliated against for doing something for which we have a basic right to do – organize.

Starbucks CEO Howard Schultz said recently that corporations across the country are “under assault” by unions, a battle cry that is reflected in the war being waged against workers.

From Buffalo to Memphis to Staten Island and Bessemer, Seattle, Mesa, and everywhere else, we remain persistent and determined to continue to fight for a better workplace and a better world. With many major victories, we have shown we can win. But it is only possible when we unite together in our common interests.

We are calling on our communities, friends, allies, neighbors – the whole working class – to join together in solidarity this May Day 2022 and mobilize against the union busting of Starbucks, Amazon, and every other company engaged in repressing its workers.

Whether you are attending a May Day event or hosting your own, we must be loud and clear that we will defend our right to organize without any impediments, legal or otherwise.