The following article appeared in the April 13 online issue of Fightback News!  (fightbacknews.org/)  The four police videos of the killing of Patrick Lyoya were released on April 13. 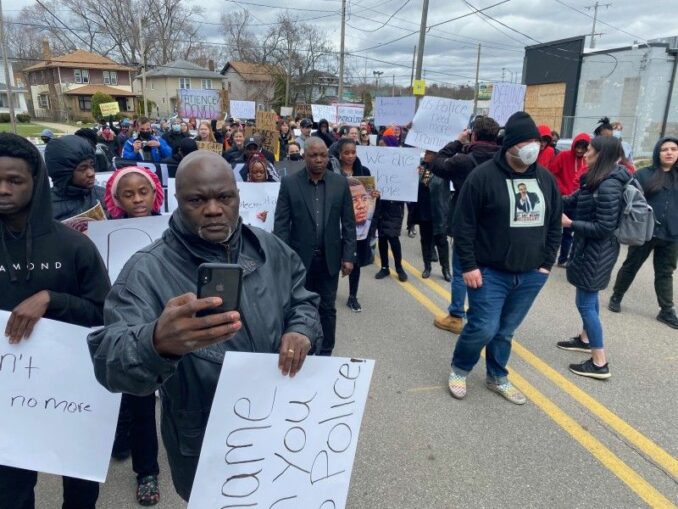 Grand Rapids, MI – A crowd of hundreds marched to the Grand Rapids City Commissioners meeting, April 12, to demand both the release of the raw video showing the murder of Patrick Lyoya and the arrest of the still-unnamed killer cop. Lyoya was a 26-year-old Congolese immigrant executed by the Grand Rapids Police Department last week [April 4–WW]. In the days after his death, citywide mourning and protests against the police have increased and are expected to surge after the release of the video this Wednesday. 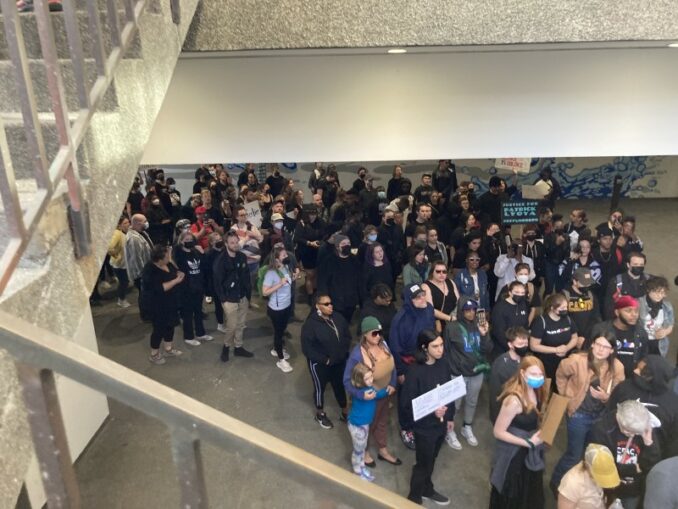 The police department has continued to stall the footage, while the city insists it is acting in full transparency. Patrick’s father, Peter Lyoya, said the video shows his son murdered “execution style” on the ground. The family has said the narrative of the department, that there was a “struggle,” runs counter to the facts.

The Royal Black Panther Party of Grand Rapids organized the march to the meeting. It was attended by hundreds of community members and weaved through all the major streets of downtown. “Say his name! Patrick Lyoya!” and “You can’t stop the revolution! GRPD is not the solution!” echoed through the city.

Before the protest, barricades were erected around the police station. A few of the businesses downtown have boarded up their windows with “Patrick Lyoya” painted on the plywood.

The protesters stopped in front of City Hall and were led through chants of “I am! A revolutionary!” and “Black power!” before crowding into the building. Demonstrators were led up in groups due to capacity limits, while the rest stayed on the first floor to continue chanting and watching the livestream in an overflow room.

City Manager Mark Washington, near the beginning of the meeting, said the video will be released tomorrow at 3 p.m. during a livestream with the police chief, who will “provide context” for the images. The video provided Wednesday will be compiled from nine different sources. GRPD Chief Eric Winstrom released a statement warning the video has “graphic images resulting in the loss of life” and will be tagged with an age restriction on the city’s YouTube page.

During public comments, calls for the release of the video, the arrest of the unnamed killer cop and the resignation of the entire commissioner board were prevalent. A few speakers acknowledged their continued presence at the meetings over the past few years, and the city’s inaction in resolving the GRPD’s brutality, which has left local activists with physical injuries and mental trauma.

Commissioners were called out by name for failing to do their jobs and for their “crocodile tears” now that the attention is on them. One local woman said her husband was murdered by the GRPD, and her 12-year-old child was too traumatized to attend the meeting.

The meeting lasted well over four hours. Further protests have already been scheduled after the release of the video, including a call to action on Friday, April 15.