There was joy and a sigh of relief when Ketanji Brown Jackson was finally confirmed as the first Black woman justice to sit on the U.S. Supreme Court, based on a 53-47 Senate vote April 7.

Then another legal development of a totally different kind occurred in Starr County, Texas, the same day.

A 26-year-old Latinx woman, Lizelle Herrera, was arrested in Rio Grande City, near the Texas-Mexico border, and charged with murder for allegedly terminating her pregnancy. Her bail was an outrageous $500,000.

The county sheriff, Carlos Delgado, stated Herrera was arrested and served with an indictment on the charge of murder, accusing her of intentionally and knowingly causing the “death of an individual” by self-induced abortion.

University of Texas law professor Stephen Vladeck stated that, based on Texas law, Herrera should not be charged with any crime – much less murder – because “homicide doesn’t apply to the murder of an unborn child if the conduct charged is ‘conduct committed by the mother of the unborn child.’”  (theguardian.com, April 9)

After the arrest of Herrera, a protest was quickly organized by La Frontera Fund, a pro-abortion group in Rio Grande City, outside the Starr County jail where she was being held.

Rockie Gonzalez, the group’s founder and board chair, told Texas Public Radio “We would like for people to know that the legislation that Gov. [Greg] Abbott has put forth and tried to push in this state is making it so that innocent people are being harmed. And we want people to know that this type of legislation impacts low-income people of color communities the most, when state legislators put restrictions on our reproductive rights.” (dallas.com, April 9) 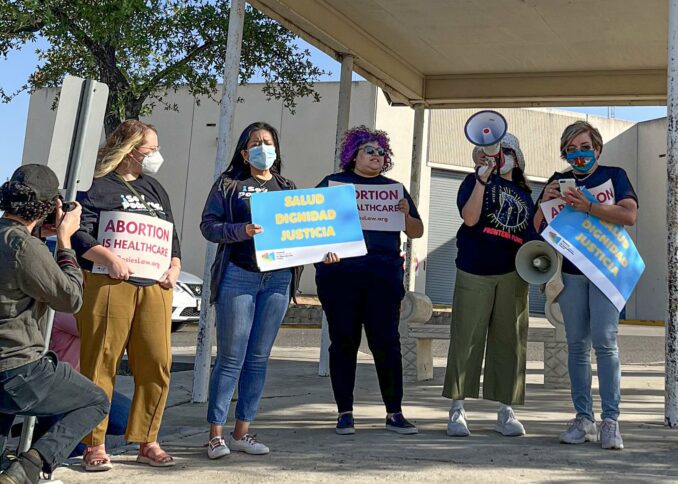 National outrage at the arrest, amplified on social media, led to many phone calls to the jail demanding Herrera’s release. Frontera Fund posted the following message on Instagram April 9:  “Lizelle Herrera has been released on bail and has secured legal counsel. With permission from her family, Frontera Fund is launching the ‘Lizelle Herrera Legal Defense and Reconciliation Fund’ to support Lizelle and her family with ongoing legal costs beyond the bail, as well as economic relief as reconciliation for the trauma the State of Texas, Governor Abbott and the Starr County Sheriff have inflicted on them. You can donate here: bit.ly/Lizelle

The Texas Tribune then announced on April 10 that all charges had been dropped against Herrera, which is a major victory since she should not have been charged in the first place.

It should, however, come as no surprise that this arrest happened in the state where super-repressive Senate Bill 8 went into effect September 2021. Known as the “Texas Heartbeat Act,” this legislation criminalizes all abortions after six weeks  from conception, a period when most people are unaware that they are pregnant.  There are no exceptions to this archaic legislation– not even pregnancies resulting from rape or incest.

This law encourages “private citizens” to sue anyone who performs or assists someone in getting an abortion after embryo heartbeat is detected by ultrasound. Those who do sue can be awarded a minimum of $10,000 for successful lawsuits.

The Texas bill is one of 26 similar state bills that have passed or are up for a vote in the near future. These seek to weaken and eventually overturn Roe v Wade – the 1973 SCOTUS decision that legalized the right to abortion. That ruling codified that women have the right of autonomy over their own bodies.

Another 2021 Texas law prohibited doctors and clinics from prescribing abortion-inducing medications after the seventh week of pregnancy and prohibited delivery of the pills by mail.

Texas is propagating these violently misogynistic laws supposedly to protect “life.” At the same time, Texas carries out more horrific executions of incarcerated people than any state – disproportionately of Black, Brown and other marginalized individuals.

Texas has the largest number of residents lacking health insurance in the country. Some 4.2 million Texas residents are on Medicaid – including more than 3 million children. But Texas lawmakers have refused to expand Medicaid coverage to an additional 1.4 million eligible adults. These numbers do not take into account undocumented workers and their families. (texastribune.org/2021/05/07)

In a Workers World Jan. 27 article, Kathy Durkin predicted this outcome from the rightwing campaign against reproductive rights: “Overturning legal abortions would engender more desperation, oppression and repression. This would send pregnant people seeking to end unintended pregnancies back to dangerous back-alley and self-abortions. It would be a huge medical and legal setback for millions of people and create more difficulties especially for women with low incomes, Black, Latinx, Indigenous, im/migrants, disabled people, rural residents, and individuals with various gender identities who can become pregnant.” (workers.org/2022/01/61402/)

White supremacy – in Texas or other state legislatures, Republican or Democrat – is at the heart of the struggles against racism and patriarchy and serves the interests of the white, male-dominated billionaire ruling class. The Supreme Court – which was forced to pass Roe v Wade despite a conservative majority, due to the mass struggle at that time – could very well overturn that decision this summer.

The arrest of Lizelle Herrera is not an isolated matter.  Just as the vigilante murder of teenager Trayvon Martin helped spark the Black Lives Matter movement in 2012, the victimization of Herrera could potentially spark an ongoing national struggle to defend reproductive justice – not in the courts but in the streets.

And at the heart of this struggle will be the right for those who can become pregnant to be the ones who control whether or not they bear children.