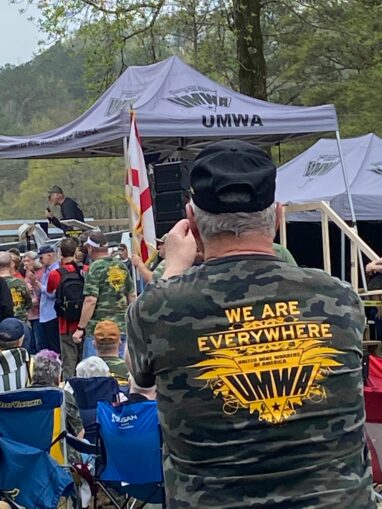 Members of United Mine Workers (UMWA) Locals 2245, 2368 and 2397 continue to “hold the line” against predatory Warrior Met Coal. They walked out 370 days ago to protest the company breaking its promise to reverse givebacks that workers made in 2016. To save the parent coal company from bankruptcy, the miners had agreed to bone-deep cuts in wages, health benefits, leave time and other previous gains.

Following a familiar capitalist “bankruptcy” ploy, Warrior Met now says it made no such promise to restore wages and benefits, refusing to acknowledge its huge profits from the miners’ backbreaking labor. The coal company is “the leading dedicated U.S.-based producer and exporter of high quality metallurgical (‘met’) coal for the global steel industry.” (Business Wire, Feb. 24, 2021)

Warrior Met is backed financially by mega-hedge fund BlackRock. The UMWA miners are convinced BlackRock is blocking any progress toward a fair contract. The Alabama miners have protested in the streets in front of BlackRock in New York City several times.

“Right to work for less” business interests inside Alabama want to stop any momentum by unions, like that by the miners or the current campaign at the Bessemer Amazon warehouse. During the strike year, state and local police intensified harassment of UMWA picket lines. A state judge placed injunctions to make it almost impossible for strikers to picket.

Today’s massive rally underlined the miners’ determination to beat Big Business by holding out “one day longer, one day stronger” in Alabama.

Alabama AFL-CIO President Ben Riley summed up the solidarity of the rally: “Our labor family is supporting you, across the U.S., across the globe. Give ’em hell!” In addition to Riley, presidents or other officers of the Georgia, Kentucky, Virginia and West Virginia state AFL-CIOs spoke. They brought contingents ranging from mining to tobacco to confectionary production workers.

And there were miners – rank upon rank of them – wearing camouflage shirts because they are in a class war. At least fourteen UMWA locals traveled long hours to bring solidarity from Indiana, Illinois, Kentucky, Ohio, Virginia and West Virginia. Third-generation African American miner James Gibbs, UMWA At-Large International Vice President, was present to contribute wisdom gained during his leadership of militant strikes against Peabody and Pittston coal companies.

Historically significant was the contingent present from UMWA Local 1440, Matewan, West Virginia— – site of the 1921 epic struggle to unionize with the UMWA. State and federal troops were brought in to crush the union. Thousands of miners fought them valiantly at the Battle of Blair Mountain, the largest labor uprising in U.S. history.

Carolyn Foster, Alabama Poor People’s Campaign, reminded the crowd of Dr. Martin Luther King, Jr.’s solidarity with the striking Memphis sanitation workers immediately before his assassination there. Emphasizing the connection between worker rights, voting rights and the right to health care, she urged solidarity across issues: “Forward together! Not one step back!”

Fred Ingram, national secretary-treasurer of American Federation of Teachers (AFT), explained that his union included many different kinds of education workers and said: “All the classroom teachers across the U.S. are with you!”

Sara Nelson, militant president of the Association of Flight Attendants-CWA (AFA), emphasized her union’s connection to the UMWA tradition to “organize every single person” across lines of nationality and race: “It doesn’t matter whether you are 2,000 feet underground or 35,000 feet in the air. We are all breathing recycled air and are not safe without a union.”

‘A year of the worker’

Toward the close of the rally, Brian Sanson, national secretary-treasurer of the UMWA, blasted the failure of the Alabama state government to support the Brookwood miners. He ripped into U.S. Senator Tommy Turberville as a “lapdog of Warrior Met.” He predicted: “A new year has begun, a year of the worker, a year we’re going to jail corrupt politicians and corporate criminals, a year of solidarity, of workers across the country saying ‘Enough is enough!’”

Throughout the rally, tribute was paid over and over to the UMWA for its staunch support of other worker struggles. Speakers emphasized: “The UMWA always has your back.” That principled solidarity has been repaid during the year’s strike with Roberts naming huge contributions to the UMWA strike fund from other national unions, as well as checks from union locals brought directly to the rally— – money coming out of the pockets of current workers and retirees.

As people streamed to their cars and buses to continue a “Caravan to Victory,” these two writers distributed hundreds of Workers World newspapers. The front page headline, “Rehire the Memphis Seven,” featured workers of color fired for organizing at a Tennessee Starbucks. Rally goers grabbed the paper, eager to hear news about another labor struggle in the South.

An older African American man from a Kentucky UMWA local paused to take a paper and give this comment: “I worked for the Peabody Coal Company, in the mines. We went through all this there. But UMWA saved our benefits and our pensions. So we are here in Alabama for the union now. We lived through it! We got their backs now.”