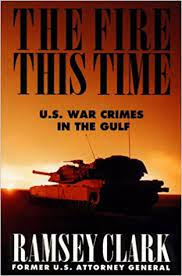 This book reports on the findings of a popular tribunal of U.S. war crimes in Iraq.

As so often with Biden’s statements, it is hard for an outsider to judge if his words express U.S. policy or had simply leapt from the ether to his tongue without benefit of conscious consideration. This threat to file war crimes charges, however, was not immediately retracted by Biden’s staff, as was his earlier threat of regime change in Russia.

For anyone who has paid attention to U.S. foreign policy over the last 33 years – the end of the Soviet Union over 1989-91 is a key historical starting point – the fact that a U.S. president should charge another country’s leader with war crimes seems the zenith of imperialist hypocrisy. It also seems as if Biden is opening a can of worms regarding U.S. presidents, an act he may come to regret.

For who will crawl out of that can?

Bush Senior, George H.W. Bush, in 1991 bombed Baghdad, Iraq’s capital, killing many civilians – as any imperialist warmaker does – and his military targeted an underground air shelter to kill the families of many members of the Iraqi government. The Pentagon targeted this shelter on purpose. But that Bush, now dead, can only be tried posthumously.

From 1993 on, Bill Clinton continued Bush Senior’s sanctions against Iraq, which killed half a million children and twice that number of adults. In 1999 he launched a 78-day bombing campaign against what remained of Yugoslavia. NATO, led by the U.S., launched bombs and rockets at Serbian hospitals, schools, bridges, media centers and the Chinese Embassy, also destroying a center of the chemical industry and thereby polluting hundreds of square miles. Ineffective against Serbian tanks and troops, these attacks killed about 3,000 Serbian civilians, who were called “collateral damage.”

Bush Junior – George W. Bush – using the false pretext of “weapons of mass destruction,” invaded and occupied Iraq in 2003, starting with the massive bombing of Iraqi cities. This attack was aimed at creating “shock and awe” – destroying Iraq’s infrastructure. There was “collateral damage” then – that is, civilian deaths – but even more after the U.S. occupiers faced a guerrilla uprising. They could hold it back only by breaking Iraqi society apart and inciting sectarian warfare.

Under Barack Obama, the U.S. not only continued the occupation of Afghanistan – started under Bush Junior in 2001 – but it also promoted coup d’états in Honduras in 2009 and in Ukraine in 2014, along with a proxy war in Syria and the unprovoked brutal bombing of Libya, both in 2011, and support for Saudi Arabia’s murderous war on Yemen. Syria was mostly destroyed, but finally survived. Libya is still in a state of collapse, unstable and a source of misery for Africa. In Yemen, millions face death due to famine, including children.

Donald Trump is a special case, since he, even more than the others, should face criminal charges within the United States for his actions repressing migrants and his inaction to counter the danger of COVID-19, plus his promotion of racist, misogynist and other reactionary ideologies like homophobia and xenophobia. Trump, too, was no peacemaker; he’s responsible for the assassination of Iran’s General Qassem Soleimani in a drone strike. He offered U.S. recognition to Jerusalem as the capital of the Israeli apartheid regime and raised the level of Pentagon spending.

Biden’s gravest war crime since taking office – up to now – has been to impose sanctions on Afghanistan, where resistance to U.S. presence forced the U.S. to finally end a 20-year war and occupation. Under Obama, Trump and Biden, U.S./NATO troops and drones killed Afghan civilians in the thousands by explosion and shrapnel, but Biden’s latest sanctions threaten to kill millions of Afghans by starvation.

While U.S. spokespeople – not only Biden – threaten an ICC trial of the Russian president, they omit mentioning that the U.S. never acknowledged the authority of this court. Washington feared the indictment and trial of its own leaders, and with good reason.

As a protest to the various U.S. aggressions, and to prevent the imperialist ruling class from being the only ones to write their history, the International Action Center and allied organizations held popular war crimes tribunals against Bush Senior and his cronies in 1991-92, Clinton and company in 2000, and Bush Junior and his gang in 2004. The popular tribunals, with former U.S. Attorney General Ramsey Clark as prosecutor, found these U.S. presidents guilty of war crimes and crimes against humanity.

Before any U.S. president – who is the CEO of world imperialism – can dare to charge some other country’s leader with war crimes, the very least that should be done is to allow and encourage the ICC to bring charges against the living U.S. former presidents, as well as Biden himself.

Unless the U.S. offensive against Russia and China can be stopped, Biden’s greatest war crimes may still lie ahead. Better to put him on trial for what he’s already done.