If Ketanji Brown Jackson is confirmed as the newest member of the U.S. Supreme Court, replacing the soon-to-be retired Justice Stephen Breyer for whom she once clerked, she will become the first African American woman to occupy the highest judicial seat in the U.S.

Jackson will be the third Black person and the sixth woman to hold this office. Her confirmation would be almost equivalent to Barack Obama’s election as the first Black person to become U.S. president — but on a judicial level. 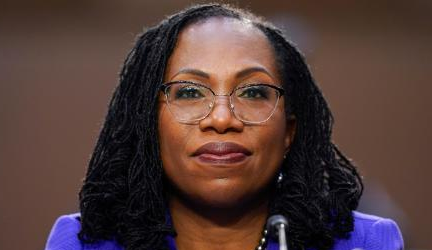 Why did Joe Biden pick Ms. Jackson as his nominee? She has been a federal judge for almost 10 years, mainly on the District of Columbia Circuit Court of Appeals. She is a Harvard University graduate and a Harvard Law School graduate. She has been a corporate lawyer and served in the U.S. Sentencing Commission, a congressional agency that examines disparities in sentencing based mainly on nationality.

As a public defender, Jackson has represented clients accused of terrorist acts who are serving time at Guantanamo Bay and also some accused of promoting child pornography. She has been praised by both the Fraternal Order of Police and the International Association of Police.

Based on these credentials alone, an objective person would think that Ms. Jackson would meet bourgeois standards for a Supreme Court Justice, who will no doubt follow capitalist law to the letter. Additionally, her becoming a justice would not change the SCOTUS political balance of power related to the decade-long dominance of majority conservative versus minority liberal voting pattern of 6 to 3.

But though Ms. Jackson was very clear in her March 21 opening statement before the Senate Judiciary Committee that she will uphold the laws of the U.S. Constitution, some of the most ultra-right, racist senators, who happen to be Republicans, belittled her credentials and viciously attacked her political stance.

Other bigots questioned how she “managed” to graduate from Harvard University, using that as an excuse to attack the right to affirmative action and political representation systematically denied to Black people since the violent end of Reconstruction. The Republican National Committee has labeled her as a “radical, left-wing activist.”

The ultra-right wing, including Senators Ted Cruz and Marsha Blackburn, have accused her of having a “hidden agenda” when it comes to racism. For example, they pointed to the 1619 Project of the New York Times magazine, which references the year the first enslaved Africans arrived in the then-colony of Jamestown, Virginia. Ms. Jackson characterized the 1619 Project as a “provocative study.” (Washington Post, March 24) For this mild response, she was attacked as reaffirming that the U.S. was founded on a racist basis.

Ms. Jackson was praised by Black women friends and contemporaries, along with members of the Black Congressional Caucus, most notably Senator Cory Booker (D-NJ), before and during the hearing. Mazie Hirono, the Japanese-American senator from Hawai’i, also defended her.

But most of the scathing accusations of Ms. Jackson have gone unanswered by white Democrats. Even Joe Biden admitted that he has not viewed any of the hearings, being occupied with ratcheting up the war threats against Russia.

Ironically, the outcome of the hearing is scheduled for April 4, the 54th anniversary of the assassination of the Rev. Dr. Martin Luther King Jr.

Reactionary role of the Supreme Court

In the interests of the workers and oppressed peoples, racism in any form must be fought and condemned. This does not preclude exposing the limitations and contradictions within the struggle, especially if within a bourgeois-established institution. In this case, that institution is the Supreme Court.

The U.S. presidency, Congress and Supreme Court were established in 1789 within the framework of the U.S. Constitution. This document was written by the white  “founding fathers,” many of whom were rich property owners, enslavers and proponents of genocide of Indigenous nations. These three entities developed into the executive, legislative and judicial branches of the capitalist government. All three were to share the power of upholding class rule — to protect the private property of big landowners and bosses.

In a Feb. 22 Workers World article, “Dred Scott to Daunte Wright: same repression, same fight,” I wrote: “At the height of the economic dominance of slavery in the U.S., Black people were legally viewed as three-fifths of a human being and treated no differently, or even worse, than any animal. Their ability to work and their entire being were owned and superexploited by their owners.

“This relationship was codified by the highest court in the country, the U.S. Supreme Court, in a historic 1857 landmark decision, when the enslaved Dred Scott decided to sue for his freedom, after his enslaver died while they were on a visit to the free state of Illinois in 1847.

“After losing court decisions through various legal state and federal appeals, Scott took his case to SCOTUS. But Scott never had a chance of winning, considering that out of the nine justices, seven were appointed by pro-slavery presidents from the South; and of these, five were from slaveholding families.

“Chief Justice Roger B. Taney — a staunch supporter of slavery — wrote the ‘majority opinion’ for the court. The decision stated that because Scott was Black, he was not a citizen and therefore had no right to sue. Therefore, Scott and his family remained enslaved.” (workers.org/2022/02/61974/)

The late chairperson of Workers World Party, Sam Marcy, in a political report to a 1989 party conference, wrote: “Alongside this bourgeois democratization of the political process [expansion of the right to vote], there has been a simultaneous social and economic process which is superior in strength. That is the process of the concentration of power in undemocratic bodies. It comes from the concentration of the means of production in the hands of a ruling class which holds the power and distributes it in areas most conducive to them. So it’s not an accident that power should ultimately be exercised by the Supreme Court. That’s most reliable to them, most conservative, responsive only to those who have appointed them.

“So much talk goes on about democracy, about the rights of the people to vote and to elect, but when it gets down to the really critical issues, political power is concentrated in undemocratic bodies that are removed from the control of the masses.” (tinyurl.com/bdctjm74)

Whether or not Ketanji Brown Jackson is confirmed as the next U.S. Supreme Court Justice will not alter the entrenched white supremacy that permeates every aspect of U.S. society. The fact that the Black masses and the working class in general have been directly shut out of the process of deciding who sits on this court, which makes decisions that will impact their daily lives — from the right to organize to access to reproductive justice — is another example of why capitalist relations must be overturned to lay the basis of a true workers’ democracy — socialism.