Look at the March 20 figures from Worldometer for the United States and China, including Hong Kong.

The U.S. has officially recorded 997,845 deaths. (The real figure is certainly higher since deaths due to COVID-19 are often unreported.) Since the official death rate in the U.S. currently is around 1,200 a day, the official total for the U.S. will be over a million deaths before the end of March. 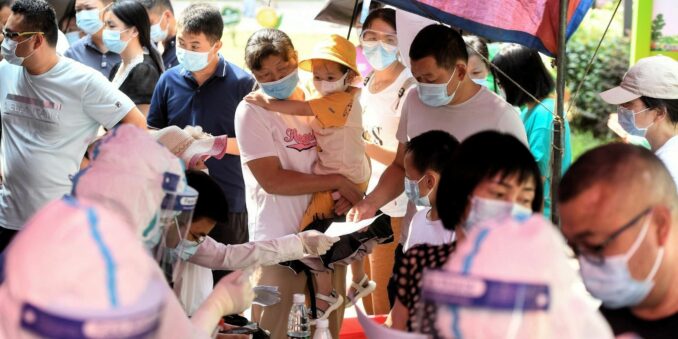 A COVID-19 vaccination site in Wuhan, China, during the upsurge of the delta variant in 2021.

Every state has abolished their mask mandate, if they even had one, and legal restrictions aimed at reducing the spread of COVID-19 are being rescinded quickly. The general attitude seems to be that people must learn to live with the disease, like they live with the flu, and accept the deaths as part of leading a normal life and keeping profits flowing.

China is reporting a COVID-19 surge in the past few weeks, with two fatalities March 19, the first COVID-19 deaths in China in over a year. China has reported only 4,638 deaths since the beginning of the pandemic two years ago. Its population of 1.4 billion is close to four times the population of the U.S.

The “zero tolerance” COVID-19 policy has led China to lock down major cities like Shenzhen in southern China, bordering Hong Kong, and in Jilin Province in the northeast. China was able to hold a successful Summer Olympics under this policy without any large-scale outbreaks.

Hong Kong, which is formally part of China but has its own health care system and a capitalist economy, has reported 5,650 deaths. Almost all of these are due to the fifth wave of COVID-19, which has battered Hong Kong for the past two months.

Hong Kong, according to an analysis by the Hong Kong Free Press, has had a peak COVID-19 infection rate of 900 per 100,000, a global record, and at one point the highest death rate in the world. Hong Kong relied on travel restrictions that involved compulsory quarantining in designated places and multiple testing. But its health care system — limited and profit-driven — collapsed as COVID-19 spread rapidly among the elderly, whose vaccination rate was low, and as restrictions and testing requirements were relaxed. Hong Kong has very dense, cramped, expensive housing.

Zeynep Tufekci, a New York Times columnist with connections to Harvard who writes for a number of influential magazines like Scientific American, wrote March 11 on the two-year anniversary of COVID-19. Her basic charge is that China covered up the pandemic in December 2019 and that this cover-up cost millions of lives.

She says: “It may seem like a fantasy to suggest that the outbreak could have been extinguished before it became a pandemic, but later outbreaks of this virus were contained. This first wave could have been too, and the pandemic might have been completely avoided, saving millions of lives and much suffering.”

Earlier in the article she charged: “China could have notified the World Health Organization sometime in early to mid-December that it had an outbreak of a previously unknown coronavirus . . . .”

Hindsight is always clearer. But from mid-December to mid-January, China’s public health leadership developed a plan that saved millions of Chinese lives — look at the figures for China and the U.S. — a plan that any other country could have adopted.

Another notable Times columnist, Paul Krugman, who has a Nobel Prize in Economics and is a research professor at the City University of New York, wrote in a March 17 column, “China [is] now experiencing a disastrous failure of its COVID policy.”

Krugman argues that the cost of China’s lockdowns is becoming unsupportable: It’s affecting Apple’s production of iPhones and creating kinks in the world’s supply chain.

Why the differences between China and the U.S.

China is a socialist country that tries to protect the lives and prevent the suffering of its people. It developed a strategy of “test, track, isolate,” before vaccines, before antivirals, before monoclonal antibodies — a strategy that involved locking down millions of people and whole cities for weeks at a time. It was a coherent approach for the whole country. Mistakes were made and sometimes corrected in time. China’s leadership realizes that the virus and circumstances can and do change rapidly.

In the U.S., a capitalist country, the approach to controlling the pandemic was remarkably incoherent. It exposed a lack of racial and economic justice and was stained by all sorts of quackery over supposed remedies — hydroxychloroquine and ivermectin were the two most promoted “cures.” Many decisions were made to preserve businesses and their profits.

If the United States had the same death rate as China — in other words, if it had the same social system and approach to COVID-19 as China — fewer than 2,000 people would have died in the U.S. in the course of the pandemic.