​As the United States military apparatus once again flexes its muscles and bares its teeth to the world, we see in its wake an international mobilization of imperialism and a hopping onto the bandwagon of warmongering. On March 9, right-wing candidate and former prosecutor Yoon Suk-yeol of the People’s Power Party won the presidency of the Republic of Korea (South Korea or ROK) in a narrow margin of 48.6% to 47.8% against Lee Jae-myung, the Democratic Party candidate.

Yoon’s party, despite its name, is not to be confused with a party concerned with the power of the people. 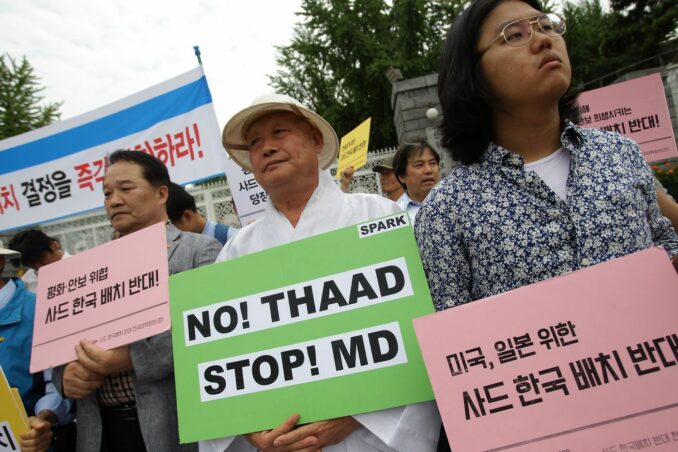 There was fierce protest against U.S. deployment of its Terminal High-Altitude Area Defense (THAAD) in South Korea in 2016.

Yoon’s campaign raises several alarms for working and oppressed people. Firstly, he ran on a campaign of cutting the minimum wage and allowing for a longer workweek. Currently, the minimum wage in the country is the equivalent of $7.20 an hour. Under the previous presidency of Moon Jae-in, South Korea’s workweek was reduced from a grueling 68 hours to a still-grueling 52 (40 hours plus 12 hours overtime).

Yoon has criticized even this limit for “inflexibility,” saying people in certain sectors, like the gaming industry, should “be able” to work 120 hours a week.

Apparently, he believes what a country of overworked people needs is simply more work.

Attack on gender equality and women

Yoon wishes to abolish the 21-year-old Ministry of Gender Equality and Family, stating with audacity that it is “inefficient” and that there is “already gender equality.” The Ministry is charged with protection of women against domestic violence, improvement of rights on a gender-equal basis, prevention of the sex trade and planning positive gender policies.

Yoon ran on a campaign of anti-feminism, pandering to a large and growing voter bloc within the country of “idaenam” (“men in their twenties”). “Idaenam” cite feminism and affirmative action as “reverse discrimination,” are in opposition to LGBTQ+ rights and (surprise) are concentrated mainly in the upper class.

Yoon campaigned to start the screening of foreigners, specifically Chinese immigrants, to deny them use of the country’s national health insurance. Yoon believes Chinese immigrants are “taking advantage” of the services and “putting their spoons on meal tables prepared by Koreans.”

This rhetoric will no doubt raise Sinophobic bigotry and Korean nationalism within the country and could potentially have the same deadly results as the hateful anti-immigration rhetoric in the U.S. There could easily be a rise in hate crimes against Chinese people in Korea, as well as against women and gender-oppressed people.

While these domestic policies will suffocate the working class and deprive them of liberties, Yoon’s foreign policy exists on a potentially more dangerous ground.

The U.S. already maintains a nuclear presence in South Korea by use of bombers and submarines. The denuclearization of the country in 1991 reversed the three-decade-long amassment of 950 warheads. Now, in a time of renewed nuclear fearmongering, Yoon Suk-yeol has requested the U.S. redeploy its tactical nuclear weapons to his country. These include intercontinental ballistic missiles.

So far the U.S. has denied the request; but with its recent saber-rattling onslaught and attempted recuperation of U.S. hegemony, centered around the vilification of Russia, further requests could be approved.

As it stands, the U.S. has multiple air defense battalions scattered around the Korean peninsula. In 2015 during my time in the U.S. Army, I was attached to a PATRIOT Launching Station battery in Osan Airbase, south of Seoul. I saw the disdain of the Korean people toward the military occupation of their country and watched as they further protested this occupation after the U.S. sent live samples of anthrax to the country through the airbase.

Typically, our military unit would convoy across the land and set up missile systems at various bases, including a weeklong display of force directly on the border with the Democratic People’s Republic of Korea. Soldiers would test weapons, throw grenades and don their “full battle-rattle.”

The endless military adventurism, dog-and-pony shows and touting of U.S. missile systems was then and is an ongoing force against the self-determination of the Korean people.

The weapon system I was tasked with was a truck-mounted launching station capable of sending 4 to 16 missiles — each costing $3 million — between 25-99 miles. The number of missiles and range depends on the launcher used.

But this massive system was a pistol compared to THAAD (Terminal High Altitude Area Defense), with missiles that can fly further, higher and faster than the PATRIOT.

In 2017, the THAAD program was deployed to South Korea, despite popular opposition, and was instrumental in muddying relations between China and that country, as China had reasonable cause to believe THAAD could be used against its people. Later that year, China and South Korea agreed to attempts at renormalization of their relationship.

Now, in addition to heinous requests for the redeployment of tactical nuclear weapons, Yoon has requested additional THAAD installations from the U.S. While Yoon has claimed the THAAD missiles are for “deterrence” against the DPRK, China opposes the installation due to additional security issues regarding surveillance and espionage from the system’s radars.

Yoon wants South Korea to join a three-way military alliance with the U.S. and Japan. This would strengthen the U.S. presence in the Indo-Pacific and South China Sea and assist the U.S. in militarily surrounding China.

Currently the U.S. is feeding the conflict in Ukraine to use it as a proxy war against Russia — even as it escalates hostility to People’s China. If the U.S. further militarizes and nuclearizes South Korea and forms a new bolstered military alliance in the area, this will increase military tension on China’s and Russia’s eastern areas from the Korean Peninsula.

Joe Piette contributed to this article.