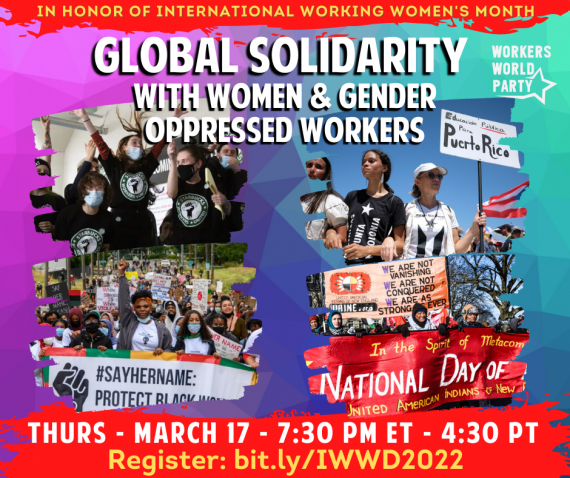 The panelists included Norma Pérez from A Call to Action on Puerto Rico and a former teacher; Marie Kelly, a registered nurse and at-large member of National Nurses United; and Stephanie Tromblay, who is a lifelong union activist and Communications Workers member, and is of Huron and mixed Southeast Indigenous nations heritage.

The co-facilitators of the webinar were mYia X, member of WWP’s Disability Justice and Rights Caucus, and Ted Kelly, a member of the Lesbian, Gay, Bisexual, Transgender and Queer+ Caucus of WWP. Palestinian activist and writer, Susan Abulhawa, recorded an inspiring message for the webinar. Deborah Rodriguez, WWP candidate, created a beautiful slideshow with music, showing many struggles led by women and gender-oppressed people from around the world.

“These socialists deplored the terrible working conditions faced by women workers as they poured into factories. A million women marched in Europe to protest during the first commemoration of IWWD on March 8, 1911. Later that month, in New York City, 146 workers — 123 of whom were women, mostly immigrants between the ages of 14 and 23 — were killed at the Triangle Shirtwaist Factory. Radical working women called strikes and demonstrations and kept the struggle in the streets.

“In less than two years, March 8 also became synonymous with anti-imperialism. Women throughout Europe demonstrated against their own imperialist governments who plunged the world into war in 1914.

“Workers World supports struggles against racism, misogyny, homophobia, transphobia, ableism and physical and sexual abuse on and off the job. We call for reproductive justice everywhere. We adamantly support Indigenous women worldwide, leading the fight against corporate destruction of the planet.

“We applaud the fights for unionization, with workers of color, women and gender-nonconforming people in the forefront, including Starbucks and Amazon workers here in the U.S.”

Connecting all the issues

When asked why every issue is a woman’s issue in the struggles against capitalism and imperialism, and how important is the need for global solidarity, each of the panelists provided unique answers. Pérez stated, “Women are leading the liberation movement while still facing gender oppression. Women were the first to suffer from the current pandemic economic crisis, forced out of jobs with no childcare, working from home where faced with anti-woman attitudes.

“This global crisis of capitalism has no concern for the survival of people, while women suffer at work and are at risk, especially as teachers and health care workers. We women are the first to face food and water shortages and war. We are on the front lines, leading the fight. The revolutionary movement needs to continue to grow. The face of struggle around the world is a woman’s face. We are the ones facing oppression; we are the ones fighting back!

“It is urgent to continue the feminist anti-capitalist struggle until we free ourselves from patriarchy, imperialism and reactionary local regimes. For example, in Puerto Rico, women earn between 20% and 39% less than men who have the same training and do the same job. The more education and age, the greater the wage gap.

Although women prepare more academically and are the majority of the population, they are the minority in the workforce (40%). In administrative positions, the majority are men. Some 86% of sexual harassment and abuse is perpetrated against women; femicides have been on the rise.”

Perez concluded: “Everything is continuously changing. I am under continuous construction to gain knowledge of what I didn’t even know was changing, what the younger ones are teaching me and what I can share and be open to learning about different perspectives. This is not a time for waiting; now we are fighting. We have to share our experiences, what we are suffering, and be humble and listen and learn from others and build community. It is because I am a teacher; I always have faith that we can change thinking and find the points in common.”

A salute to women workers

Tromblay remarked: “For women of color, the threat remains whether they, their families and their children will be safe from the police, from racist attacks, along with the global threat of femicide.

“And for Native women, the threat of violence overall we see manifested in the crisis of Missing and Murdered Indigenous Women, Girls, Two Spirits and all Indigenous Persons. There are boys and men missing and murdered too.

“The treatment of women and all working people — who under the profit system give up one-third to one-half of the hours of their daily lives to the corporate bosses — has worsened to where we saw teachers nationally walk out on wildcat strikes before the pandemic. And workers are fighting for unions again! The Starbucks workers, who are often LGBTQ+, women and gender-oppressed workers, are on a roll filing for union elections.”

Tromblay emphasized: “We salute all the Amazon workers, working in horrible, even killing conditions, fighting for a union. And I’d like to give a shout out to the 150 Meow Wolf Workers Collective/CWA here in Santa Fe, who are bargaining this week for their first contract.”

Marie Kelly responded with: “The pandemic has made it impossible to hide how broken the profit-driven U.S. health care system is, but nurses working in hospitals knew it firsthand, well before the almost 1 million COVID-19 deaths in this country.

“Now is the time to be active in campaigns against for-profit health care and advocate for nurses in their fight for safe patient-to-nurse staffing ratios. Nursing is still a profession predominated by women. Nurses experience misogyny and the oppression of patriarchy, despite being the essential workers caring 24/7 for the sick and dying.

“The so-called nursing shortage is not due to a lack of nurses but is a result of hospital administrations’ deliberate understaffing in order to maximize profits. Nurses see the dangers here and are furious that they are being forced to either provide inadequate patient care or leave the profession.”

She went on to say, “it is a fact that the U.S. population has poorer health than most industrialized countries, and this is directly linked to the for-profit health insurance industry, big pharmaceutical companies and hospital capitalists. Only a universal single-payer system will guarantee that health care is a right that everyone is able to claim.”

Deborah Rodriguez commented: “I realized how important it is to normalize the point about women being the face of the struggle. But even the ones who are not in a movement are literally struggling to get by day to day, regular working women, Black and oppressed women, incarcerated women.

“I’m reminded that it’s just a lot of women out there who are struggling to get by day to day. And they may not have all the analysis and all the depth that is being shared here today; but only if they knew, I wish they knew and would join in. So the struggle for us is just to get them on our side.”

mYia X stated, “I’ve had the ‘Women of Vietnam’ book in arm’s reach. Madame Nguyễn Thị Bình talked about political consciousness. She mentioned that [the Vietnamese] organized village by village. Those who knew how to fight taught others.

“And when we say brick by brick, block by block, you know how vital it is that each one of us really do that political education to become internationalist. As we sit in the belly of the beast or wherever we may be, when imperialism tries to make us think like we have amnesia, like what we’re seeing them do right now; we haven’t seen this before.”

Go to youtube.com/watch?v=cDvYi-S22ts to view the webinar.