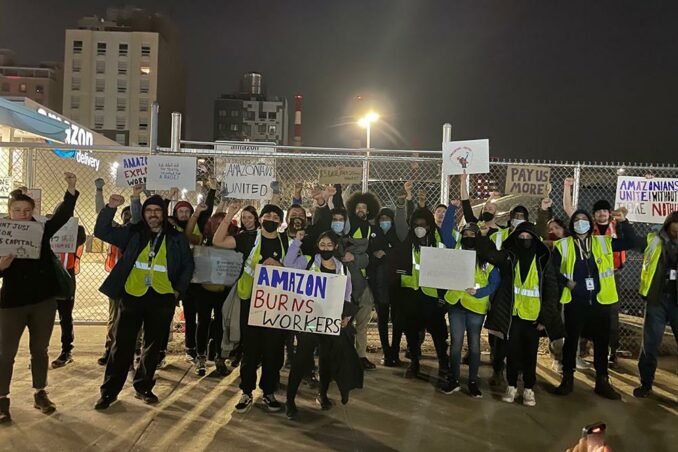 Amazon night shift workers in Queens, New York, and Marlboro, Maryland, (near Washington, D.C.) walked off the job March 16 in the wee hours of the morning. The walkouts — which involved roughly half the shift workforce in the three delivery stations — demanded higher pay and the restoration of 20-minute breaks that began during the pandemic but were later stopped by Amazon. These workers are on a “megacycle” shift from 1:00 a.m. to 12 noon.

Amazonians United coordinated the walkouts as an “escalation” of a multicity petition campaign, demanding $2 an hour more for megacycle workers, accommodations for workers who cannot work the full 11-hour shift (such as parents and caregivers), company-provided Lyft rides and a return to the 20-minute breaks. (amazoniansunited.org) 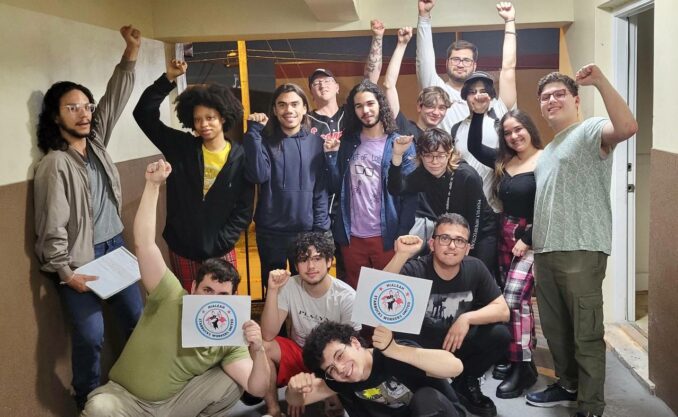 In Bessemer, Alabama, Amazon warehouse workers are voting by mail in a second National Labor Relations Board-supervised election on whether to be represented by the Retail, Wholesale and Department Store Union. Ballot counting will begin March 28.

The NLRB ordered a second election due to Amazon’s illegal union busting during the first Bessemer election last year — but the company has not stopped its widespread practices of disinformation and intimidation. Because of high turnover due to intolerable and unsafe working conditions, half the workers voting in this election did not vote in the previous election. 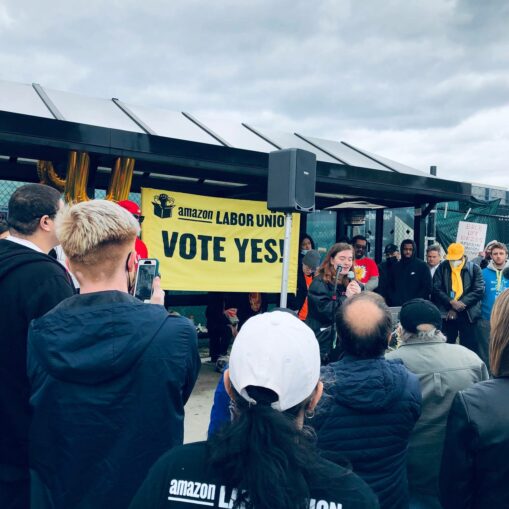 Meanwhile, the Amazon Labor Union is gearing up for an NLRB election at a Staten Island, New York, warehouse taking place March 25-30. The ALU is organizing around an eight-point program of demands including better pay, safety, paid sick time, overtime, a dedicated shuttle service, restoration of 20-minute breaks and allowing the union to present its position at “trainings.” These mandatory meetings are where Amazon engages in intimidation and presents one-sided, anti-union propaganda. (amazonlaborunion.org)

From mass phone banking to solidarity rallies, ALU is employing a range of tactics designed to win the election. UNITE HERE Local 100 and Workers Assembly Against Racism in New York City have made their office space available to ALU for the phone banks.

In Southern California, Amazon Flex drivers rallied outside an Amazon warehouse March 17 to demand higher pay to compensate for higher fuel prices. These drivers must use their own personal vehicles and pay all accompanying costs such as gasoline and tolls. 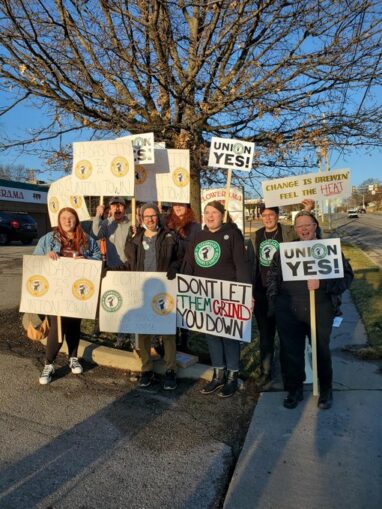 March 18 marked another milestone in the Starbucks union organizing campaign, with the Westmoreland Starbucks in Portland, Oregon, becoming the 150th store to file for an NLRB election. One day later the Overland store near Kansas City was hit with an Unfair Labor Practice strike that kept the store closed all day. Strikers carried signs reading “Don’t let them grind you down” and “Change is brewing, feel the heat.”

This follows a one-day ULP strike at a Denver Starbucks March 11.

The NLRB has filed ULP complaints against Starbucks alleging illegal surveillance, threats, intimidation, firings and more. Starbucks has fired union organizers in Memphis, Tennessee; Buffalo, New York; and Phoenix. But workers are not intimidated — Starbucks Workers United won three more union elections in the Buffalo area where the union drive was launched and is now headquartered.

Starbucks had closed one of these three stores for two months; the workers there who signed union cards had to transfer to other stores. Most of the workers voting in the representation election were hired after the filing for an election with the NLRB. But the union still won the vote!

Coffee shop resistance is not limited to Starbucks. Workers at Great Lakes Coffee in Detroit have been on strike since Feb. 16. Labor and community supporters have joined several solidarity rallies and marches, including the latest on March 20. “Comrades in Coffee” are fighting to be represented by UNITE HERE Local 24.

There are many strikes in progress across the country, including teachers in Minneapolis and St. Paul, Minnesota, and Forest Park, Illinois; service technicians at Cummins in Concord, Massachusetts; musicians with the San Antonio Symphony; and United Steelworkers (USW) members at Sherwin Williams in Greater Cleveland.

The wave of working-class resistance, initially identified with the month of “Striketober,” shows no sign of letting up. We are running into a Labor Spring.