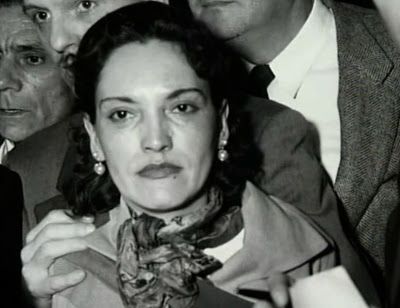 Expressing the sounds of her beloved Puerto Rico, hundreds of people singing plenas and chanting about her valiant character accompanied independence fighter Lolita Lebrón to her final resting place in the Old San Juan Cemetery. She was buried close to her dear Maestro, Don Pedro Albizu Campos. As she had requested, the burial took place just over 24 hours after her death.

“Lolita Lebrón, ejemplo de valor” (example of courage) and “Se siente, se siente, Lolita está presente” (You can feel Lolita’s presence) were chanted mostly by women. On several occasions they took the weight of the casket from the men carrying it.

Not only pro-independence Puerto Ricans from all parties and organizations attended, but people of all political affiliations honored Lebrón. The breadth of support attested to Lebrón’s nurturing and humane nature and her relentless call for unity to defend Puerto Rican identity. She made friends across party lines.

Lebrón was as fierce defending independence as she was humble in appreciating all who fought for Puerto Rican values. One example was her friendship with Norma Burgos, a pro-statehood senator, present at the funeral, who shared jail time with Lebrón for opposing the U.S. Navy occupation of the island of Vieques, which it used for bombing exercises.

Lebrón’s death immediately aroused a steady stream of heartfelt messages, poems, videos and songs across the internet. Both alternative and corporate newspapers ran obituaries, including an article in the Washington Post that spoke for the ruling class of the city where Lebrón was arrested in 1954. The Post’s author compared Lolita to revolutionaries like the Argentine/Cuban Che Guevara and Mexican Pancho Villa. The international community, especially Cubans and Nicaraguans, sent many messages.

Lolita Lebrón’s life, both personal and political, represents the history of Puerto Rico during the consolidation of U.S. colonial power on the island and the fight against that domination. Lebrón was born Nov. 19, 1919, in the city of Lares, where in 1898 people rose up against Spanish domination, in what is known as the Grito de Lares.

The event called “the Ponce massacre” marked Lebrón’s teenage years. On Palm Sunday — March 27, 1937 — colonial police surrounded a peaceful demonstration by members of the Nationalist Party in the city of Ponce. Under the direct orders of U.S.-appointed and U.S.-backed Gov. Blanton Winship, police opened fire, killing 22 unarmed people and wounding 200.

In 1941, leaving her daughter under her mother’s care, Lebrón left Puerto Rico for New York City. As did thousands of Puerto Ricans in the 1940s, she sought a job that was better than the unstable, poor existence facing them on the island. She worked in the garment industry and formally joined the Nationalist Party in New York, becoming an important leader. Lebrón was jailed for a brief period along with other Nationalists after demonstrations in front of the U.N. against “Free Associated State” status that the U.S. imposed on Puerto Rico in 1952.

In 1954 Nationalist leader Don Pedro Albizu Campos suggested an action in Washington, D.C., to call international attention to the island’s status. The year before, the U.S. government had convinced the U.N. to approve a resolution that took Puerto Rico off the list of colonial territories. This resolution allowed the U.S. to withhold information about Puerto Rico from the U.N., clearing the way to intensify the island’s exploitation.

On March 1, 1954, Lebrón led the operation in the House of Representatives with Nationalist comrades Rafael Cancel Miranda, Irving Flores and Andrés Figueroa Cordero. Shouting “Viva Puerto Rico libre” and unfurling a Puerto Rican flag, she was the first one to shoot — at the ceiling.

Except Flores, who was able to escape, the other three were immediately arrested. Hundreds of Nationalists were arrested for “preventive detention” in New York, Chicago, Washington and all over Puerto Rico, including Albizu Campos. Lebrón was sentenced to 56 years in prison and the rest to 81 years for “assault with a weapon.”

In 1979 after a great deal of pressure — particularly from the Puerto Rican Political Prisoners Committee — President Jimmy Carter pardoned them along with Nationalist Oscar Collazo, who had been imprisoned since 1950 for the attack on Blair House. They were all freed unconditionally. Figueroa Cordero had been freed in 1978 because of ill health.

In an Aug. 4 interview with the Puerto Rican weekly Claridad, Cancel Miranda remembers Lebrón’s courage: “[S]he went up the stairs [in Congress], and I saw this woman; and I do not get tired of saying it, she was carrying not only our flag, but our dignity. . . . There was this Puerto Rican woman from Lares, going up these stairs knowing that she was going to die, because she went to give her life [for our homeland].”

Once free, Lolita continued tirelessly in the struggle to liberate her homeland: going on tours, giving speeches, writing poetry, but mostly joining others in demonstrations in Puerto Rico. She was a visible figure in the struggle against the Navy presence in Vieques and was arrested at age 81 for crossing into restricted shooting grounds.

In spite of great suffering during her incarceration in federal prisons in the U.S., where she was cruelly mistreated and mentally tortured, coupled with her own personal losses — both her children died while she was in prison — Lebrón kept unwavering commitment to the struggle for independence. Her contributions are many — writings, poems, but, above all, her work assuring that women are active participants and leaders in the struggle. She is an example of Albizu Campos’ famous pronouncement: “La Patria es valor y sacrificio” (Homeland is courage and sacrifice).

The writer participated in the movement to free political prisoners in Puerto Rico and was part of a team of progressive physicians who examined Lebrón, Cancel Miranda and Flores upon their return to Puerto Rico in 1979.