Houston — On any day of the week, prisons are hell. Texas prisons are no exception. And for prisoners on death row, the hell never ends unless they are executed. The hell increases exponentially each day for those who are innocent and awaiting execution. 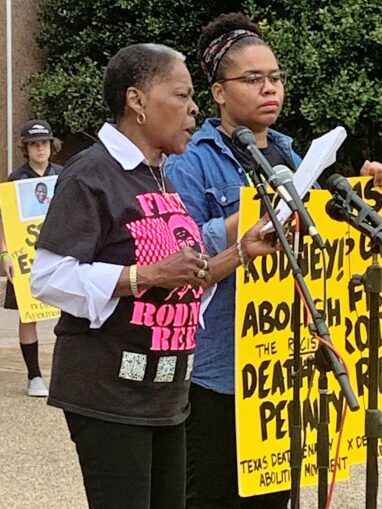 This is the extra hot hell that many innocent people on Texas death row are living 24 hours a day, seven days a week. One of them is Michael Gonzales, who just survived an execution date on March 8 and was granted a stay.

Another death row prisoner is Melissa Lucio, who is scheduled to be legally lynched on April 27 for an alleged crime. Robert Roberson, like Lucio, is accused of a crime that did not happen. Each of them is accused of killing their young child, But these children’s deaths were not caused by the parents; they were accidental.

Rodney Reed is another prisoner living on death row hell. He survived an execution date in November 2019 because Texas’ highest court, the Court of Criminal Appeals (CCA), issued a stay and ordered the trial court in Bastrop County to consider new evidence of Reed’s innocence.

The hearing in Bastrop was finally held in July 2021. Unfortunately, the judge’s opinion was almost word-for-word the same as the state’s opinion. The judge ignored all of the newly discovered evidence and recommended the CCA deny Reed a new trial.

The patience of Reed’s family, friends and supporters is running low. On March 4, in an attempt to give a nudge toward justice, Sandra Reed, Rodney Reed’s mother, along with his spouse and dozens of supporters, gathered outside the CCA building in Austin.

Sandra Reed spoke of the family’s long journey trying to find justice: “We continue to hope and pray that the truth will come out.” Rodney Reed’s father, Walter, died a few years ago and did not live to see his son freed.

The guest speaker was Juan Melendez, who is with Witness to Innocence, a national organization of exonerated death row survivors, active in the fight to end the death penalty. He traveled from New Mexico to Austin to show solidarity with Reed.

Melendez told the large crowd: “I spent 17 years, eight months and one day on Florida’s death row for a crime I did not commit, before I was finally exonerated and freed in 2002.” He told of the pain of knowing he was innocent and the anguish he felt at being far from his family, especially his mother.

Other speakers included Delia Perez-Meyers, who expressed the constant anxiety of having an innocent family member on death row. She and her relatives constantly fight for her brother, Louis Castro Perez.

Perez-Meyers said, “He has been on death row for 23 years fighting to prove his innocence. It takes a toll on all of us, knowing our loved one is innocent, knowing the state could kill them. But we continue to fight.”

Lily Hughes, who is with Austin Abolitionists and a longtime supporter of Reed’s, chaired the press conference and rally. Every major news outlet in Austin, including the Houston Chronicle, turned out to cover the event.

When the truth is exposed about what happens in the jails, courtrooms and the prisons, it is clear that the real criminals are the cops, district attorneys, judges and prison officials who allow the racism, degradation and injustice — and the absolutely illegal and unconstitutional actions — to continue day after day. They are the real criminals under capitalism.

Gloria Rubac is an organizer of the Texas Death Penalty Abolition Movement.