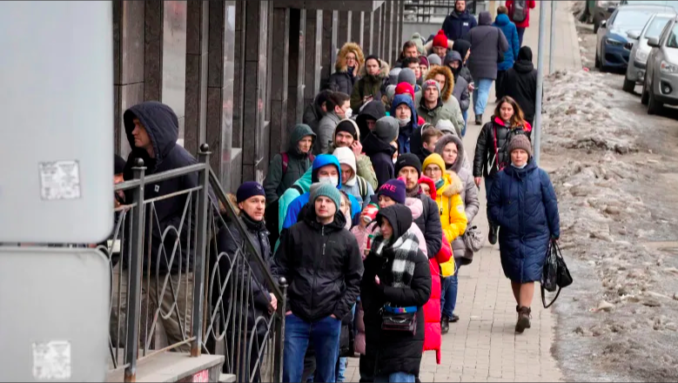 People line up to withdraw U.S. dollars and euros from an ATM in St. Petersburg, Russia, on Feb. 25.

A seismic shift is sending shock waves through the global economy.

The well-established capitalist disorder, dominated by U.S. imperialism and in place since World War II, is on shaky ground. Extreme economic sanctions imposed on Russia are dragging the whole world into a war that started long before the Russian intervention in Ukraine on Feb. 24.

A big calculation is which countries will be forced to accept the onerous economic sanctions imposed on Russia by the U.S. Countries representing a majority of the world’s population are not willing to tie their sovereignty to total Wall Street control. To the shock of U.S. war strategists, almost all of Latin America, the Caribbean, many countries in Africa, and most of Asia have rejected the sanctions on Russia.

The open defiance by so many countries and major trading blocs is a stunning confirmation of the weakening hold of U.S. economic power.

It is well recognized that U.S. economic dominance in Europe, and globally, has been challenged by increased European Union trade with Russia and China. The growing integration of the Eurasian bloc of countries, stretching from China and South Asia through Central Asia and Russia to Europe, gives a huge economic advantage to the countries involved.

The growing integration of EU trade and investment with Russia and China threatens both the domination of U.S. corporate power in Europe and U.S. global hegemony. It is in the interest of corporate power in the U.S. to cynically provoke a conflict where it is the least affected, but doing so in a region where its capitalist rivals in the EU will carry the heaviest burden.

The U.S. has instigated a crisis by encircling Russia with NATO bases, organizing constant military operations and supplying heavy weapons to Ukraine to fire on Russia’s borders.

By placing nuclear weapons in Europe and setting up nuclear-capable weaponry on Russia’s borders, it has been openly provoking Russia to strike in self-defense. The U.S. used the nuclear threat not only on Russia but to impel the European Union to impose harsh sanctions on Russia, even though it was against EU interests to cut economic ties with Moscow.

With the EU, and especially Germany, unwilling to impose sanctions that would break all relations with Russia, the U.S. played hardball. President Joe Biden threatened the EU on Feb. 26, two days after Russia began its military operation in Ukraine, that the only alternative to going along with the U.S. sanctions “would be the Third World War.”

“You have two options. Start a Third World War, go to war with Russia, physically. Or, two, make sure that the country that acts so contrary to international law ends up paying a price for having done it. . . . I know these sanctions are the broadest sanctions in history, and economic sanctions and political sanctions.”

In an interview with blogger Brian Tyler Cohen, Biden said his “goal from the very beginning” was to keep NATO and the European Union “on the same page.” (tinyurl.com/22dbb5d7)

The EU, a bloc of capitalist economies dominated by Germany, is unable and unwilling to directly challenge U.S. hegemony, especially when they are threatened with nuclear war in Europe if they don’t comply. The EU imposed all the sanctions demanded by the U.S. Their sanctions mirror those imposed by Washington. However, they are still able to purchase some gas from Russia, based on an agreement with the U.S.

Sanctions were imposed on Russia in 2014 after the majority Russian population in Crimea voted to rejoin Russia. This followed a U.S.-supported fascist coup in the Ukrainian capital of Kiev. At that time, two regions in East Ukraine — Donetsk and the Lugansk People’s Republics — broke away from the fascist gangs in Kiev.

Since the 1999 U.S./NATO bombing of Yugoslavia, and despite constant warnings of danger even from its own political strategists, the policy of the U.S. government has been to keep absorbing more East European countries into NATO, building NATO bases around Russia, recruiting and training soldiers and mercenaries, creating provocations on the Russian border and using Ukraine as a pawn to destabilize the entire region.

These years of constant economic and military attacks on Russia are hidden from the public in the U.S. and the EU.

Why is EU/Russian trade and integration so threatening to U.S. imperialism?

The EU is the biggest investor in Russia. A new and larger double pipeline, called Nord Stream 2, was built to carry cheap natural gas from Russia through the Baltic Sea and into Europe. It was supposed to provide fuel for EU industries and heat for millions of homes, while avoiding a reliance on high-polluting coal and oil. German Chancellor Olaf Scholz suspended the project Feb. 22.

Energy comes to 62% of the EU imports from Russia. It costs much less than gas from the U.S., which is the largest exporter of fracked LNG gas. This is a challenge to opening new markets. With war and sanctions, U.S. gas and oil corporations will immediately profit from skyrocketing prices for fuel and guarantee their future control of the European market.

The clash is larger than just a gas pipeline. The U.S. economy is focused on military production. It is the largest exporter of weapons systems. But U.S. imperialism is unable to match China’s Belt and Road development plans. More than 138 countries have signed on for new ports, railroads, industrial hubs and low-interest loans.

China’s Belt and Road development loans are far more attractive than U.S. weapons systems and the harsh austerity plans that are attached to IMF and World Bank loans.

U.S. finance capital is alarmed that two-thirds of the member countries of the European Union have signed on as formal members of China’s Belt and Road Development projects. Port cities in Greece, Italy, Portugal and Hungary are being rebuilt. New energy projects are underway. Europe’s trade with China now exceeds its trade with the United States. (tinyurl.com/5bw7t6yv)

In the struggle to maintain its dominant position, U.S. imperialism has only one tool against these rapidly developing and sharply competing economic relations: war. Both military war and the economic war of sanctions.

Sanctions are not a deterrent to war or a substitute for war. They are in fact an escalation of the war.

Sanctions create hyperinflation, artificial famines, social upheavals and health crises that punish civilian populations. As deadly as bombs, sanctions are an act of war. They are correctly labeled a Crime Against Humanity.

Will sanctions succeed in restoring the position of U.S. imperialism? That is clearly the calculation.

International Monetary Fund senior deputy managing director Gita Gopinath gave an authoritative view of this expectation that financial sanctions will drive Russia into “deep recession,” and “shift global economic order. . . . It has implications for the global economic order as we know it.” (tinyurl.com/2chjw8fe) Other news articles predict that the Russian economy is “going down the ice chute,” will “tumble,” “go into free fall,” etc.

Several economists warn that it will impact the global economy. To the bankers and financiers, the pain of millions, even within the U.S., is of no concern, as long as they can pick up the pieces afterwards.

Speculators predict “defense” industries and energy companies will prosper. All financial predictions in the U.S. and Europe are that this will hit the European economy much harder.

Many of these countries, however, are finding ways to survive through complex barter and exchange programs that are developing as the number of sanctioned countries grows.

Almost all of the countries hit by these harsh U.S. destabilizing measures and asset confiscations sanctions have signed up with China’s Belt and Road Initiative development programs. Many of the sanctioned countries, including Venezuela, Cuba and Syria receive reliable shipments of needed fuel and grain from Russia. These new forms of exchange, developed through necessity, are beginning to weaken the intended economic strangulation. Russia still has a strong market for its exports beyond the reach of U.S. sanctions.

Russia is also a member of the Shanghai Cooperation Organization. This is an economic and security alliance that is the world’s largest regional organization, covering approximately 60% of the area of Eurasia, 40% of the world’s population and more than 20% of global gross domestic product (GDP). Of the 14 members of this trading bloc, six are already under U.S. sanctions but continue normal economic relations.

To the shock of Washington’s war strategists, many countries not currently under U.S. sanctions are refusing to comply with the U.S. and EU sanctions imposed on Russia. To date India, Pakistan, Bangladesh, Indonesia, South Africa, Kenya, Tanzania, Turkey, United Arab Emirates, Saudi Arabia, Qatar, Brazil, Argentina, Bolivia, Mexico, and other countries with smaller economies have refused to comply with U.S. measures that damage their own trade relations.

These are nations with growing economies and large populations. Several countries that were formerly part of the Soviet Union and are now part of the Eurasian Economic Union (EAEU) — Belarus, Armenia, Kazakhstan and Kyrgyzstan — are not likely to comply.

Several countries, not willing to openly confront U.S. economic wrath, have vaguely stated they would only comply with sanctions imposed by the U.N. Security Council, where a Russian or Chinese veto would make such a vote unlikely.

U.S. economic and political pressure on all these countries to comply will intensify in the coming period.

China’s top banking regulator, Guo Shuqing, says: “We will not participate in such sanctions, and we continue to maintain normal economic and trade and financial exchanges with relevant parties.” (New York Times, March 11) After Mastercard and Visa stopped their operations, Russian banks turned to China’s UnionPay, which offers payment options in 180 countries.

China has not yet given economic or military assistance to Russia. It has simply refused to cut off its normal economic relations. This is infuriating the Biden administration.

The U.S. publicly threatened China for helping Russia evade sanctions. China was reminded that two of its biggest trading partners are the U.S. and European Union. China needs access to those markets.

White House national security adviser Jake Sullivan threatened China directly, stating: “We are communicating directly and privately to Beijing that there absolutely will be consequences” if China helps Russia “backfill” its losses from the sanctions. “We will not allow that to go forward and allow there to be a lifeline to Russia from these economic sanctions from any country anywhere in the world.”

Sullivan said China and all countries are on notice that they cannot “basically bail Russia out . . . give Russia a work-around to the sanctions,” with impunity. (tinyurl.com/j35ueywt)

New forms of trade and exchange do challenge the hegemony power of the U.S. dollar. But extreme measures imposed on Russia will create intense economic pain of spiraling inflation and unemployment on a global scale.

The U.S. ruling class, the U.S. Congress and the U.S. corporate media are at this time unanimously in support of an economic war and even a military confrontation, regardless of how destructive they would be to human life, as long as they would break open new markets and destroy their rivals.

The Democrats quickly dropped Build Back Better promises and a COVID-19 health package in order to saturate Ukraine with weapons. Working people in both the U.S. and Europe will pay the price.

The growing danger is that a U.S. imperialist war on this scale, combined with the demand that the whole world participate, could dangerously escalate.