The disparate and often racist treatment of refugees of war is starkly apparent as the crisis unfolds in Ukraine. With 24/7 coverage, Western media has not missed an opportunity to garner sympathy for the nearly 2 million disproportionately white Ukrainians currently fleeing the war. No one is denying that their situation is devastating and heartbreaking. 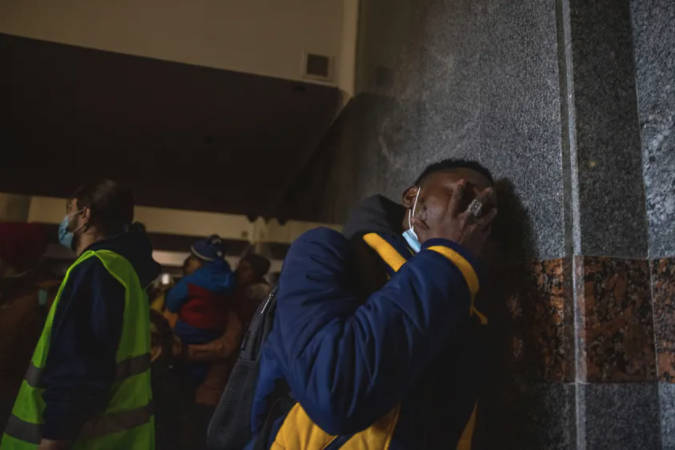 What is in question, however, is why the same Western media gave little to no coverage of the 1.5 million other Ukrainian refugees forced to flee their homes to escape bombing and shelling by their own government following the 2014 U.S.-instigated, right-wing coup d’etat. The U.N. reports that at least 14,000 people have died as a result of internal conflicts inside Ukraine since 2014, but little was reported on this by corporate media.

The United States’ 20-year war in Afghanistan left that country in devastation and turned one in 10 Afghan people into refugees. Yet Western media paid scant attention to the 2.6 million Afghan refugees. Nor did they have much sympathy for the 6.7 million refugees forced to flee Syria, as the result of 10 years of civil war, largely fueled by the U.S. arming forces to oppose President Bashar Assad. In describing the media attention focused on Ukrainians, one racist NBC News correspondent actually said: “These are not refugees from Syria; these are refugees from Ukraine … They’re Christian; they’re white; they’re very similar.”

The U.S. continued racist treatment of refugees seeking to escape the results of neoliberal policies in Latin America and Haiti has resulted in the deportation of tens of thousands of predominantly Black and Brown people.

Congressperson Rashida Tlaib, D-MI, released a statement March 11 addressing this issue. She writes: “As a neighbor in a predominantly Black city [Detroit] and as a Palestinian American, I am deeply familiar with systemic racism and oppression, including segregation. As we know, the United States treats refugees very differently based on their race. In the past year, the Biden administration has deported more than 20,000 Black Haitian refugees. Our immigration system has subjected Black Cameroonian refugees to torture and deportation back to harm.”

Tlaib addressed the plight of thousands of Black and Brown refugees, many Arab or African students, trying to flee Ukraine only to be denied transportation throughout Ukraine and turned away at the Polish border. She stated: “Blatantly racist media coverage of the war and refugees has clearly shown how Black and Brown people are deemed less worthy of support and even of living.” Tlaib gave examples of mainstream news reporters who described Ukrainian refugees as “more civilized,” “more intelligent,” “more educated” and, because they are white, “more worthy” of concern than Arab refugees.

These white-supremacis tcomments help explain the non-stop attention the U.S. and European media are giving Ukraine refugees. For the first time in recent history, the majority of those fleeing a war zone are European, white and therefore “worthy of attention.

‘Callous acts are atrocious and reprehensible’

In a March 10 statement, the National Association for the Advancement of Colored People (NAACP) expressed dismay over Ukraine’s racist treatment of Black families from the African diaspora and other people of color seeking to flee the war zone only to be pushed from trains and beaten by police officers. They note: “In these crisis moments, choosing citizenship over humanity is an atrocity. These callous acts are atrocious and reprehensible. As the world comes to the aid of Ukraine and nations support the resettlement of people fleeing the nation, every individual must be treated with dignity and humanity.”

They called on the Biden Administration and the United Nations to take action to protect the rights and to ensure the safe passage of all persons fleeing the war zone. “The NAACP will do everything in its power to fight racist, cruel acts such as these — no matter where they are happening.”

On March 9, the NAACP and partner civil rights organizations sent a letter to Ursula von der Leyen, President of the European Commission, addressing these concerns and calling on that body to take “swift and proactive action to ensure the fair and humane treatment of all refugees with special attention to nondiscrimination.”