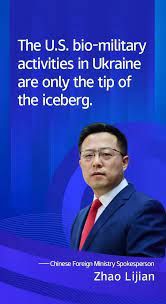 On March 9, Russian Foreign Affairs Ministry spokesperson Maria Zakharova demanded transparency from the United States on its military biological weapons program carried out in Ukraine and funded by the U.S. Department of Defense. (tinyurl.com/yeys4jj9) The Russian military previously claimed to have documentary evidence that Ukrainian authorities have been hastily destroying dangerous evidence of highly pathogenic bacterial and viral agents, which they allegedly kept in laboratories funded by the Pentagon. (tinyurl.com/cj5ar4jx)

Stressing that such laboratories were located near the border with Russia and confirming the presence of dangerous pathogens such as anthrax and cholera, the Ministry of Foreign Affairs ruled out any peaceful use of the biological weapons programs in Ukraine.

“According to the documents, the American side planned to conduct work on pathogens of birds, bats, and reptiles in Ukraine in 2022, with a further transition to studying the possibility of carrying African swine fever and anthrax,” Konashenkov said, adding that the researchers were looking into how to efficiently spread pathogens by migratory birds. “The purpose of this, and other Pentagon-funded biological research in Ukraine, was to create a mechanism for the covert spread of deadly pathogens,” he explained.

China’s foreign ministry has called on the U.S. to disclose information on the Pentagon’s biological weapons laboratories in Ukraine “as soon as possible.” (tinyurl.com/bdvkxwbf) Spokesman Zhao Lijian stated that according to data “released by the United States itself,” the U.S. Department of Defense controls 336 biological laboratories in 30 countries around the world, including 26 in Ukraine alone. (tinyurl.com/3dekk2mx)

Particularly alarming is that the “biolabs” are clustered on the borders of the Pentagon’s largest enemies: China, Russia and Iran. Zhao warned that the U.S. “has been exclusively obstructing” the establishment of an independent verification mechanism and that the biological laboratories in Ukraine are just “the tip of an iceberg.”

While the U.S. corporate media denies the presence of U.S.-funded “biolabs” in Ukraine as “QAnon conspiracy theories,” Under Secretary of State for Political Affairs Victoria Nuland testified before a Senate Foreign Relations Committee hearing March 8 and confirmed “Ukraine has biological research facilities.” Nuland said the U.S. is “working with the Ukrainians on how they can prevent any of those research materials from falling into the hands of Russian forces, should they approach.” (cspan.org, March 8)

Nuland’s testimony begs the question: If the research the U.S. was funding in these Ukrainian biological laboratories is innocent, why is Nuland so concerned that this research material could fall into Russian hands? Russia is a world leader in scientific research, so much that they beat U.S. Big Pharma in the development of a COVID-19 vaccine. (tinyurl.com/yc7twhu5)

The only reasonable explanation for Nuland’s concern is that Russian forces could definitively expose the bioweapons research funded by the U.S. as a direct violation of the United Nations Biological Weapons Convention, which “effectively prohibits the development, production, acquisition, transfer, stockpiling and use of biological and toxin weapons.” (tinyurl.com/2p88d5dv)

Nuland had played a key role in the U.S.-backed coup in Ukraine in 2013-14, where she gained notoriety for her statement, “Fxxk the EU.”

On March 7, Russian Armed Forces revealed they had found dozens of biological laboratories in Ukraine and had obtained documents that proved researchers were weaponizing anthrax, among other pathogens. Lieutenant General Igor Kirillov claimed that the only reason Kiev reportedly moved to destroy the materials was out of concern that Russian experts “will highly likely prove Ukraine and the U.S. have been in violation of the Biological Weapons Convention,” once they study the samples. (tinyurl.com/wvv6exw)

The U.N. Security Council gathered last Friday to hear Russia’s official statements declaring that Russian military forces discovered documentary evidence that the Kiev regime is urgently concealing traces of a military biological weapons program, implemented under the direction of and with funding from the U.S. Department of Defense. (tinyurl.com/ywcu2dvz) Amassed documents reveal experiments funded and directly supervised by the Defense Threat Reduction Agency of the United States, which studied how deadly infectious disease could be intentionally spread by ectoparasites such as fleas, ticks and lice.

Russia’s Permanent Representative Vassily Nebenzia noted that after the 2014 Maidan coup, there have been outbreaks of rubella, diphtheria, tuberculosis and other diseases in Ukraine. By March 2016, a total of 364 people had died of swine flu alone in Ukraine. “While the U.S. itself shut down military-purpose biological research on its territory, due to high risks it posed to the American population, the Kiev authorities actually agreed to turn their country into a biological testing site and have their citizens used as potential test subjects.”

The documents revealed that the Ukrainian “biolabs” were directly supervised by U.S. private contractors, who were awarded diplomatic immunity.

Documents obtained by Russia reveal that the Pentagon instructed its Ukrainian “biolabs” to instantly accuse Russian Armed Forces of chemical weapons attacks, should another outbreak occur. Russia said they will soon submit these documents to the U.N. Security Council as official documents so that member states can also study and verify them.

Nebenzia’s statement accuses the United States of granting employees of the highly-confidential “biolabs” diplomatic immunity, which is normally reserved for consuls, ambassadors or government officials working on an international diplomatic mission.

Dilyana Gaytandzhieva is a Bulgarian investigative journalist, who is best known for being expelled from the European Parliament for asking the Assistant Secretary at the U.S. Department of Health questions about the Pentagon-funded biological laboratories surrounding Russia, China and Iran. For years she has been on-the-ground investigating the diplomatic immunity granted to private contractors working in U.S.-funded “biolabs” in Ukraine and Georgia.

Gaytandzhieva’s investigation found that U.S. scientists were granted diplomatic immunity to research deadly viruses, bacteria and toxins and enjoy legal protection from prosecution in the event their work results in death or injury to local populations. (tinyurl.com/35brk9km)

Principled anti-imperialists opposing the U.S./EU/NATO axis of domination must be on high alert for a coordinated false flag operation in Ukraine by U.S. intelligence agencies. It is ironic that Victoria Nuland warned that if a biological attack were to occur, everyone should be “100% sure” that it was Russia who did it. In reality, false flag operations come straight out of the Western imperialist playbook, a technique whereby the U.S./EU/NATO carry out violent attacks on innocent civilians and blame their enemy in order to justify invasions.

The war in Syria is a prime example. The media lied endlessly about the Syrian government and fabricated a narrative that Syrian forces carried out a chemical weapons attack on civilians. We’re seeing Western imperialists do it again: The Washington Post has printed a story about a potential “Russian chemical attack in Ukraine.” This same narrative is being parroted by Biden’s Press Secretary Jen Psaki, former CIA Director and Obama White House official John Brennan and the Atlantic Council’s Anders Aslund in a now-deleted tweet.

Anyone who dares exercise basic critical thinking skills and opposes the official Western narrative is smeared as a “Putin puppet” or “Russian asset.”

A major corporate media propaganda campaign is manufacturing consent for direct intervention in Ukraine by U.S./NATO forces. One of the most egregious examples is a story circulated by Western media outlets, claiming that Russia bombed a maternity hospital in Mariupol. But days earlier, Russia’s Permanent Representative Vassily Nebenzia had made a statement at a U.N. Security Council briefing on the humanitarian situation in Ukraine, in which he reported that the same hospital had been emptied and was turned into a “firing site” by Ukraine’s Armed Forces. (tinyurl.com/bdzk6c7b)

It’s evident that we are in the middle of the most sophisticated, coordinated and powerful war propaganda operation we’ve ever seen. Any point of view that diverges from the official imperialist narrative is being restricted or outright censored. Big tech firms, including Facebook and YouTube, are censoring “Russian state media” from its platforms, while simultaneously encouraging calls for violence against Russian troops and even allowing their users to wish death upon President Vladimir Putin of Russia and Alexander Lukashenko of Belarus.

What the ‘biolabs’ mean to you

While the COVID-19 pandemic has killed more than 6 million people worldwide, the U.S. government has refused to seriously investigate its origins, instead choosing to place all blame on China. How can humanity prevent another global pandemic from wreaking havoc on the poor and the working class when it still doesn’t know the true origins of COVID-19 (which is strange for a country so heavily invested in defense)?

The people of the world must know what experiments the U.S. government is funding abroad, especially when there is clear evidence they are experimenting with deadly viruses. The poor and working class must no longer be guinea pigs for biological warfare.