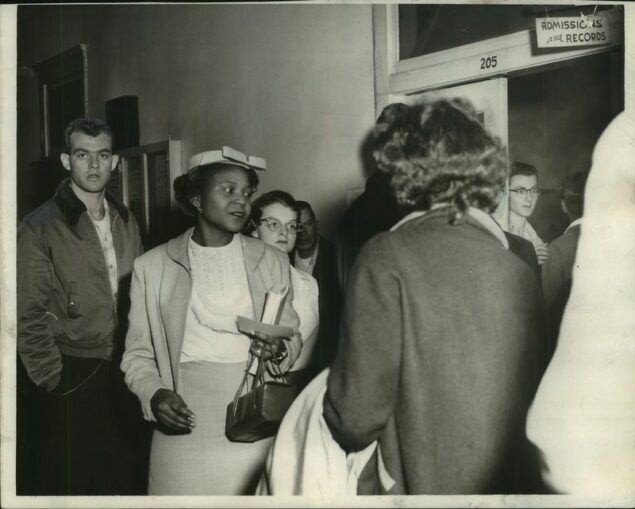 Autherine Lucy enrolls at the University of Alabama in Tuscaloosa, 1956.

Autherine Lucy, who heroically enrolled at the University of Alabama in 1956 to break state laws of racist segregation governing that public school, died March 2. She was 92 years old and lived in Bessemer, Alabama.

Lucy was the first African American person ever admitted to a “whites-only” public university in Alabama.

In 1952, she and Pollie Myers, a friend and NAACP civil-rights activist, applied to the University of Alabama. The women were accepted — and then refused admittance, when authorities discovered they were African American.

Backed by NAACP legal efforts, Lucy — already holding a B.A. from Miles College — was finally able to enroll in 1956, seeking to earn a master’s degree. Her first class was Feb. 3 in the College of Education building, named for former governor and Ku Klux Klan leader Bibb Graves.

On Feb. 6, riots broke out on the campus, and a mob of more than a thousand racist men marched through the streets of Tuscaloosa, where the university was located, intent on stopping Lucy’s enrollment. On the campus, laughing male students openly marched, held white supremacist rallies, burned crosses and hoisted a Confederate flag on University Avenue, the central street of the school.

When Lucy was driven to and from campus for classes, the white mob stoned the car, and men climbed onto the vehicle to try to harm her. Her life was repeatedly threatened.

The university board of trustees denied Lucy a dormitory room and access to the dining halls, in an attempt to force her to quit. Then, only three days after she had enrolled, they expelled her. This was ostensibly “for her safety,” but in fact the trustees were in agreement with white-supremacist law and howling mob violence.

Lucy and the NAACP, under the direction of Thurgood Marshall, filed contempt-of-court charges against the university’s trustees and president, against the dean of women for barring her from the dining hall and dormitories and against four white men unconnected to the university for participating in the riots. The federal court in Birmingham ordered that Lucy be reinstated and that the university take adequate measures to protect her.

Subsequently, Lucy had difficulty securing work as a teacher, due to her public position against segregation. She married divinity student Hugh Foster, taught school around the South, moved with her family back to Alabama in 1974 and began teaching in the Birmingham school system. 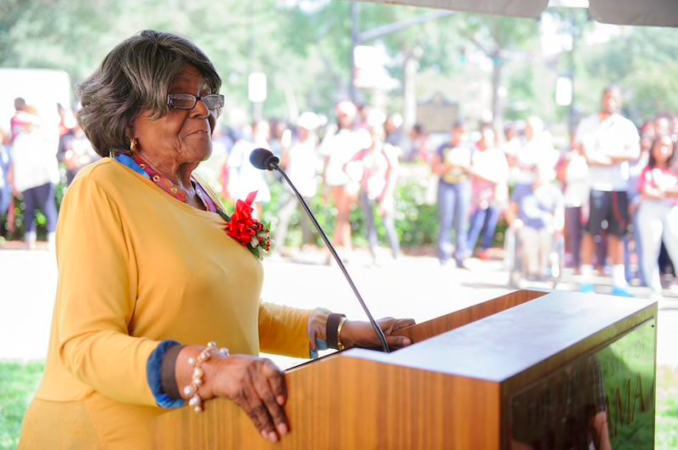 Autherine Lucy Foster speaks at the dedication of a historical marker in her name at the University of Alabama, 2017.

Educating with a building’s name

Not until April 1988 — 30-plus years after her heroic action — did the University of Alabama annul Lucy’s expulsion. She then enrolled in the university’s College of Education graduate program and received an M.A. degree in May 1992.

But the education building was still named “Bibb Graves Hall.”  Graves served two terms as a segregationist Alabama governor, from 1927 to 1931 and from 1935 to 1939.

She was granted an honorary doctorate by the University of Alabama in 2019 — over 60 years after her brave challenge.

In spring 2022 a movement arose at the university to have the Bibb Graves College of Education building renamed for Lucy. Anti-racist organizing on campus, fueled by the Black Lives Matter campaign against racist statues and monuments, had already resulted in white-supremacist names being removed on several buildings at the school.

Graves pushed through some “populist” reforms, including an end to the infamous convict-lease system, and increased funding for schools, public health and roads.

But Graves secured his political survival by relentlessly enforcing legal segregation and actively protecting white-supremacist vigilante violence. He was a Grand Cyclops in the Ku Klux Klan, lobbied against anti-Klan laws, worked to undermine investigations of Klan violence and refused to pardon the falsely convicted Scottsboro Nine  — Black teenagers framed in 1931 in Scottsboro, Alabama for the rape of a white woman — after promising to release them. (Montgomery Advertiser, Feb. 4)

On Feb. 3, the university trustees tried to “compromise” by adding Lucy’s name to the building, coming up with Lucy-Graves Hall.

Their decision drew an equal sign between Autherine Lucy, the fighter against racism, and Bibb Graves, the Klansman. University students, faculty and the community were outraged and vociferously protested. After a week the trustees were forced to drop Graves’ name completely. On Feb. 11 they renamed the education building the Autherine Lucy Hall.

Autherine Lucy Foster was present at the renaming ceremony at the University of Alabama in Tuscaloosa on Feb. 25 and died six days later — tenacious and justice-seeking to the end.

Pratt is an LGBTQ+ alumnae of the University of Alabama, class of 1968.