This lightly edited article was first published in 2009 for the 77th anniversary of the Ford Hunger March in Michigan. Detroit labor and community activists will commemorate the 90th anniversary on March 5, 2022, by retracing the steps of the marchers. 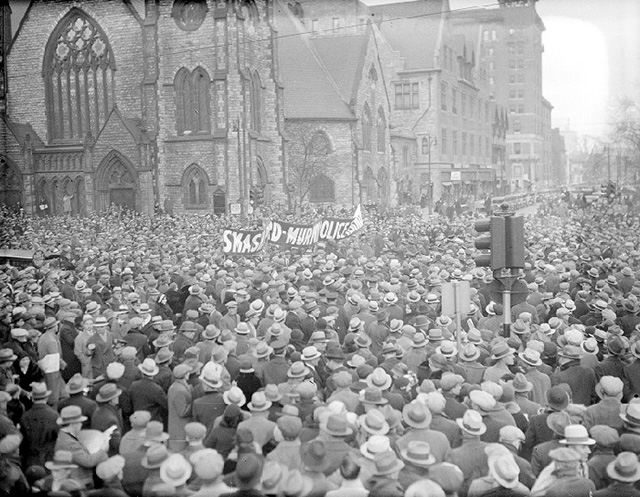 The funeral procession for the workers killed in the Ford Hunger March drew an estimated 80,000 Detroit workers. March 12, 1932.

March 7 was the 77th anniversary of one of the bloodiest chapters in Detroit labor history: the Ford Hunger March of 1932.

The stock market crashed in October 1929. By 1930 millions were without work. Nowhere was the pain felt more deeply than in Detroit, where the auto industry’s promise of prosperity had turned into its opposite. When the Trade Union Unity League, the Communist Party, the Young Communist League and the newly formed Unemployed Councils called a coast-to-coast demonstration in the U.S. on March 6, among the millions of participants were 100,000 at a rally in the Motor City. Detroit police broke up the protest, clubbing and arresting scores of marchers.

Two years later the crisis had deepened; one statistic showed four Detroiters dying of hunger every day. Unemployment compensation did not exist. With two-thirds of his employees laid off, Henry Ford, then the richest man in the world, said the unemployed created their own misery by not working hard enough.

Detroit’s network of Unemployed Councils had grown into one of the strongest in the country, saving untold numbers of families from a life on the streets. A citywide meeting of the councils — there were more than 80 neighborhood-based chapters in metropolitan Detroit — decided to march on the Ford Motor Co.’s River Rouge complex in Dearborn.

The march, called by the Unemployed Councils and the United Automobile, Aircraft and Vehicle Workers of America (which predated today’s United Auto Workers), had 14 demands: “Jobs for all laid-off Ford workers; immediate payment of 50% of full wages; seven-hour day without reduction in pay; slowing down of deadly speedup; two 15-minute rest periods; no discrimination against Negroes in jobs; relief [welfare], medical service; free medical aid in Ford hospital for employed and unemployed Ford workers and families; five tons of coal and coke for the winter; abolition of Service Men [Ford’s hated private army of spies and thugs, led by the notorious Harry Bennett]; no foreclosures on homes of Ford workers; immediate payment of lump sum of $50 for winter relief; full wages for part-time workers; abolition of the graft system of hiring; and the right to organize.” (Philip Bonosky, Brother Bill McKee: “Building the Union at Ford”)

The protest brought out thousands of workers. Beyond the immediate 14 demands, signs connected issues affecting workers around the world. They called for freedom for the Scottsboro Nine, a group of Black youths falsely accused of raping two white women. They said “Hands off China,” a reference to the sale of scrap iron to Japan, which used it in attacking the Chinese people.

The march began and proceeded without incident in Detroit. Dearborn, however, was Ford’s personal fiefdom; his cousin Clyde Ford was the mayor. Marchers were attacked with tear gas at the city’s border but forced police to retreat with a barrage of stones and clumps of frozen mud. Police regrouped, only to have the scenario repeated.

At the entrance to Ford’s complex, Dearborn police were reinforced by the Dearborn Fire Department, Detroit police and Ford’s own “Service Department.” The firefighters turned their hoses on the unarmed marchers, while police fired a hail of bullets. Coleman (also spelled Kalman) Leny, Joe DiBlasio and Joe York — the 19-year-old district leader of the YCL — were killed. Another 50 were wounded.

When Unemployed Council leader Alfred Goetz attempted to lead an orderly retreat, machine-gun fire, this time from Ford’s own finest, began anew. The auto magnate’s right-hand man, Harry Bennett, was immediately recognized and injured by stone-throwing workers. Bennett emptied his own gun and then a police officer’s revolver into the workers. He and his goons killed 16-year-old YCL member Joe Bussell and left many more injured. And 48 workers, some in their hospital beds, were later arrested.

More repression followed, with hundreds fired if they possessed left-wing literature or donated to the martyrs’ funerals. Membership in the CP was cause for arrest.

At the March 12 funeral, Ben Bussell spoke loudly: “In the name of my murdered brother, I call upon you to organize and fight. Long live the workers of the world.” As a band played the International — the lyrics “Arise, ye prisoners of starvation” particularly fitting — some 80,000 joined the march to the cemetery.

In June a Black worker, Curtis Williams, died of wounds suffered during the march. Segregation policies kept him from being buried with his comrades; the funeral committee hired a plane and scattered his ashes over the cemetery — or by some accounts, over the Rouge complex.

Leftist Detroit attorney Maurice Sugar had written two months earlier that police brutality “grows out of the institution of private property, under which one class in society lives in luxury at the expense of the great mass of workers who are compelled to live in a state of poverty, wretchedness and despair.” He defended the arrested marchers in court and later represented unions in the 1936-37 sit-down strike wave. (Christopher H. Johnson, “Maurice Sugar, Law, Labor and the Left in Detroit, 1912-1950”) Although Sugar was able to convince the grand jury not to indict any of those arrested, no one was ever indicted for the Ford massacre.

In 1941, after years of sacrifice and struggle, the Auto Workers union finally won recognition from the Ford dynasty. In 1992 UAW Local 600 retirees bought five headstones — including one for Curtis Williams — and placed them by the four graves. On each is carved the words, “He gave his life for the union.”

As workers begin again to fight evictions, foreclosures and the layoffs that cause them, the unyielding courage of the Ford hunger marchers is an inspiration.