June Knightly, known as “T-Rex,” was a dedicated anti-racist activist. When she wasn’t assisting with progressive demonstrations, she was providing aid to many unhoused people of Portland, even while requiring the use of a cane to walk. She had a female spouse and a son and was beloved by those around her as a motherly figure. And now she is dead. Not from the cancer she was battling at the age of 60, but at the hands of a right-wing murderer. 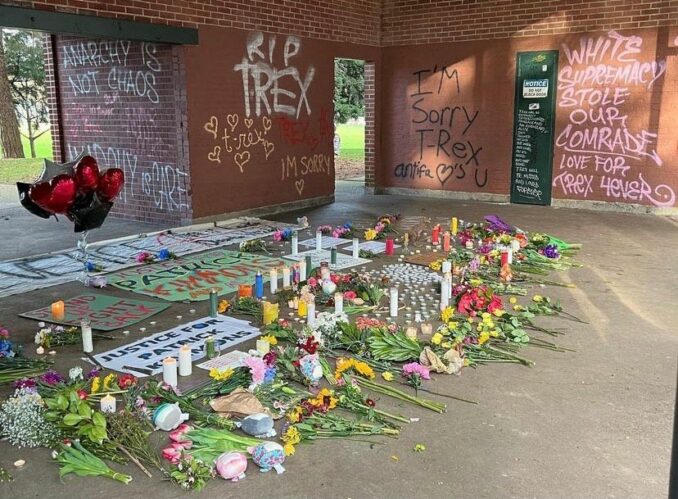 More than 50 people showed up to Normandale Park Feb. 15. This author was one of them. We gathered there to march for justice for Amir Locke and Daunte Wright, two young Black men gunned down in Minnesota by the state’s notoriously trigger-happy and racist police.

The protest was led by a group called Justice for Patrick Kimmons, named for another young Black man who was fatally shot nine times by the Portland Police Bureau in 2018. His mother, Letha Winston, has been leading anti-racist demonstrations twice a week for three years to demand justice for her son.

We were less than a minute into the march when a series of gunshots rang out more than a block away. As we moved to the sidewalk, security ran ahead before reporting back that someone had been shot. Although none of us knew the nature of the shooting, Winston wisely chose to end the march rather than lead us into danger.

June Knightly, whose life was tragically ended by the gunshots, was not part of our protest. She and several other women, wearing dresses and high-visibility gear, were safety volunteers helping to redirect nearby traffic — something they’ve done frequently for many demonstrations.

A video taken by Dajah Beck, a volunteer who was shot in the attack, was described by a prosecutor from the district attorney’s office. In it, Benjamin Smith can be seen approaching them, yelling that they were “violent terrorists.” He used misogynistic slurs and threatened to shoot them and anyone else who passed by. The women tried to de-escalate, but he only became more aggressive. There was pushing and yelling, and that’s when he pulled out a handgun. (The Intercept, Feb. 23)

Knightly was reportedly shielding others when she was shot in the head. Smith shot four others, paralyzing one from the neck down. As they screamed for help, a nearby armed protester rushed to the scene and returned fire, striking Smith in the hip, ending his rampage and likely saving lives. An anti-fascist medic then provided medical attention to the bleeding Smith. After reviewing the footage, prosecutors found no reason to charge the protester.

Smith has been charged with murder, attempted murder and assault.

Smith, a white supremacist, was known for frequent threats of violence against marginalized people and leftists. He had been reported to the police multiple times for his violent behavior. His roommate, Kristine Christenson, told reporters that he liked to yell racial slurs and express his contempt for women. (OPB, Feb. 28)

“He talked about wanting to shoot people all the time, how much he hated Antifa and Black Lives Matter and ‘those damn commies,’” Christenson said. “Living with him has been getting progressively worse. I honestly have not felt very safe around him.” (New York Times, Feb. 22)

On Twitter, Smith wished for Proud Boys to shoot people, proclaimed his preference for Nazis over anti-fascists and made several anti-Semitic comments. (tinyurl.com/5x6ee5xe)

Unfortunately, Smith is one of countless people becoming radicalized towards blood-soaked fascism. Smith was a fan of Andy Ngo, a former Portlander who has made a career propagandizing for the far-right. He’s a provocateur, who twists reality to incite violence. Ngo has been widely accused of helping fascists target journalists and activists for murder. And with Smith, he may have just done it again. (tinyurl.com/yhubvatu)

Five days before the shooting, Ngo posted Twitter threads referring to Justice for Patrick Kimmons as a violent extremist group that attacks civilians. He posted numerous photographs of individuals, encouraging his followers to identify them.

When this author attended another Kimmons’ march earlier that week, I was told by a protest guard that they were on high alert for attacks provoked by Ngo’s tweeting.

Despite Ngo’s rhetoric, my experience with Justice for Patrick Kimmons has not reflected his propaganda. I saw a group of diverse people, who truly believed Black Lives Matter, as well as a community that loved them. People would come out of their houses to clap and dance as we marched by.

Even after this tragic shooting, Andy Ngo sent out a flurry of tweets “doxxing” and blaming the victims. Showing how he fabricates narratives, he wrote, “It’s possible now the shooting happened because a homeowner had been shot upon by the #antifa extremists. The narrative by antifa that it was a far-right attack is falling apart and no evidence has appeared to support it.” And Ngo has repeatedly referred to the incident as an “antifa-involved mass shooting.” (tinyurl.com/36euct5n)

Incredibly, this isn’t even the first time Ngo has misrepresented at least one of the shooting victims, a fact he is proud of.

Whether through malice or ineptitude, the Portland Police Bureau made several misleading statements about the shooting, which were then repeated by the media. Many pushed back against the dozens of articles that described the shooting as a “confrontation between an armed homeowner and armed protesters.”

This line suggests that the incident was simply a man protecting his property from violent leftists, a favorite fantasy of conservative suburbanites. In reality, nobody on the traffic safety team was armed. The shooting happened far outside of Smith’s home. It was an attempted mass murder not a shoot-out, and Smith wasn’t even the owner of his home; he rented a nearby apartment.

The PPB stated in a press release that “Detectives believe a large number of people either witnessed what happened or recorded the incident as it unfolded” but left before they could be questioned, while a reporter for The Oregonian wrote that the shooter had no known political affiliation. (tinyurl.com/mr3a9eau)

The facts have been so obscured that some have confused the victims for the perpetrators. After reading the headlines, they’re convinced that 50 anti-fascists committed a mass shooting! This is how Ngo and the media both reinforce ideological hegemony.

The fact is that Portland, seemingly progressive on its surface, is institutionally rotten to the core. The especially bloodthirsty police have been proven to work with far-right street gangs. The city helps cover up their crimes. Local media are unconcerned with speaking truth to power, and the mayor condones the whole miserable, biased structure.

If Portland is to find a path toward dignity, it’s a path that must be forged by the people, not by business interests hiding behind fascist attacks.

T-Rex and Patrick Kimmons must have justice, and they must have it now.