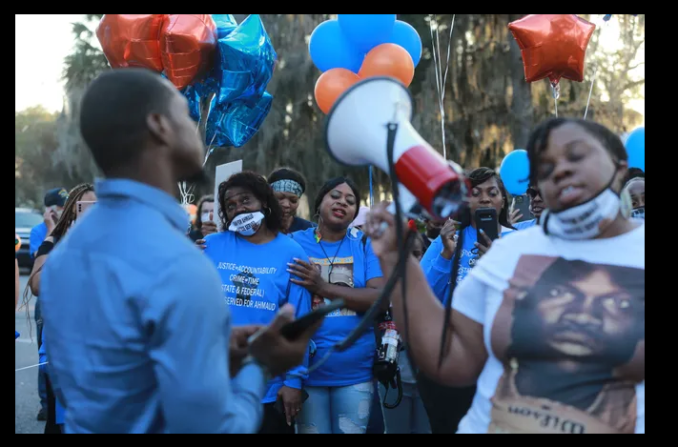 February 23: Today is Ahmaud Arbery Day, as declared by the Georgia General Assembly earlier this month. In their resolution, the legislators noted that the enslavement-era “citizens arrest” law was repealed and hate crimes legislation was passed, in response to the circumstances of his racist murder on this date in 2020.

In Metro Atlanta, Brunswick and other cities in Georgia, events honored Arbery and marked the date when the 25-year-old Black man was murdered. He was chased down, penned in and shot to death in Satilla Shores, a Brunswick suburb, by father and son, Greg and Travis McMichael and their neighbor, William “Roddie” Bryan.

On Nov. 20, 2021, the three men were convicted on state charges of murder and sentenced to life in prison. The McMichaels have no possibility of parole; Bryan could be eligible for parole after serving a term of 30 years.

This second anniversary of Arbery’s killing came a day after a jury delivered federal hate crimes convictions for the three white supremacists in a Brunswick courtroom. This jury was composed of three Black people, one Latinx person and eight white members. The three killers now face federal life sentences on top of the state sentences.

After hearing 20 witnesses describe the killers’ racist attitudes and vile language in emails, texts and in-person conversations going back years, it only took four hours of deliberations for the jury to arrive at the unanimous verdict: Ahmaud Arbery was pursued and gunned down solely because he was a Black man.

While many people may feel some satisfaction with these legal convictions, it must be noted that these three white vigilantes went free for months after they committed this murder two years ago. Until the videotape of the murder surfaced on May 5, 2020, prosecutors and police made no moves to arrest and charge them.

It should be stressed that an important factor in gaining the arrests and then convictions of the killers has been the dedicated and persistent efforts of Wanda Cooper-Jones, Arbery’s mother, and other family members, who brought local, national and international attention to this modern-day lynching. Members of the Black community and their allies kept up demonstrations for months, calling for “Justice for Ahmaud!” outside the courthouse.

When asked about the significance of the court decisions, Cooper-Jones replied “Ahmaud rests in power!” As she has repeatedly said, nothing will bring her beloved son back, but he leaves a legacy of struggle and resistance.