The Starbucks union organizing is moving faster than a runaway train. Workers at over 100 stores have now filed for a representation election with the National Labor Relations Board. Starbucks Workers United achieved this milestone when two Cleveland-area stores filed Feb. 18, following a January filing from the West 6th store downtown.

A large majority of the multinational, multigenerational and multigendered workforce at both stores signed cards supporting the union. 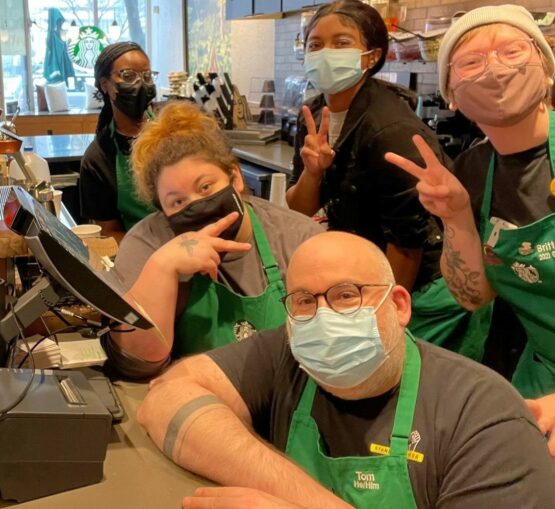 Workers World: What inspired the workers at your store to file for union representation?

We heard about Buffalo through the media when it first happened. Other stores in Cleveland definitely got wind from that, and it put that seed in everyone’s brain.

Hannah Woodside: We love our jobs, and we love working for Starbucks; but we no longer feel like we are being paid a fair or livable wage. We have been ignored or shrugged off by the company too many times when we bring up changes we want made, so we feel unionizing is the best way we can be heard. We stand with the other stores in the Cleveland area, as well as across the country, who have tried to unionize and we want to amplify their voices as well.

WW: What are the key issues for you and your co-workers?

HW: We cannot live off the wages we are given. And when hours are cut and we are denied pay for the hours we were supposed to work, we have been told by the company to cut into our hard-earned sick time and vacation time to pay ourselves!

This is not acceptable. Some of us rely on working enough hours each week to qualify for student loans. Others have families they need to take care of. It is cruel for Starbucks to take and take our labor and ask us for every ounce of energy we have as employees and to not fairly pay us. When the company keeps seeing billions of dollars in profits, we have to ask ourselves who is being paid that money? Because it isn’t us.

Starbucks has not done enough to protect us from COVID-19. We worry every day that we will spread it to our loved ones at home, because of how exposed we are at work. We demand better policies to protect us as partners and the customers who come in the store. There is no mask mandate for customers. This is NOT acceptable.

KS: Many other partners, our co-workers, share these feelings. There has been a time in the past when we have been told there are two empty seats at the table, the customers and the partners. We want [CEO] Kevin Johnson to give us our seat at the table; we want to really have a voice. When you see something is good or even great, you can still amplify your voice to where we can have the best workplace possible. We want the protection and empowerment that a union can provide.

WW: What was your reaction when the Memphis 7 were fired?

HW: We were shocked. As a store I think we sympathized with those partners. We know the company is looking for any reason, however small, to knock down these unions, and clearly Starbucks is not above bullying and threats. We believe Starbucks fired those partners to send a message to other potential unions across the country and to scare us.

We are not scared. We are stronger together.

WW: How can we show solidarity?

KS: We’ve already had some customers that have come through and encouraged us, changed names on orders to “Union Strong.” I would love to see more of that.

I would like to say that our store is ready to go forward with this; the majority signed. We want Starbucks to hear our voice. I hope we can have the support and encouragement from our company that we deserve.

HW: You can show solidarity by frequenting our stores. Come in and have a conversation with us. Or vocalize your support over social media. Let Starbucks know that you stand with the unions. Post about it on Instagram, Twitter, etc., and tag the company.

WW: In a message of solidarity, shared in a news release issued Feb. 18 by the Chicago and Midwest Regional Joint Board of Workers United, West 6th Street barista and Union Organizing Committee member Maddie VanHook said: “We are excited to welcome our friends at the Clifton and MayLee stores into our fight!

“We are stronger together, and every day we are one step closer to securing justice and equity in our workplaces.”