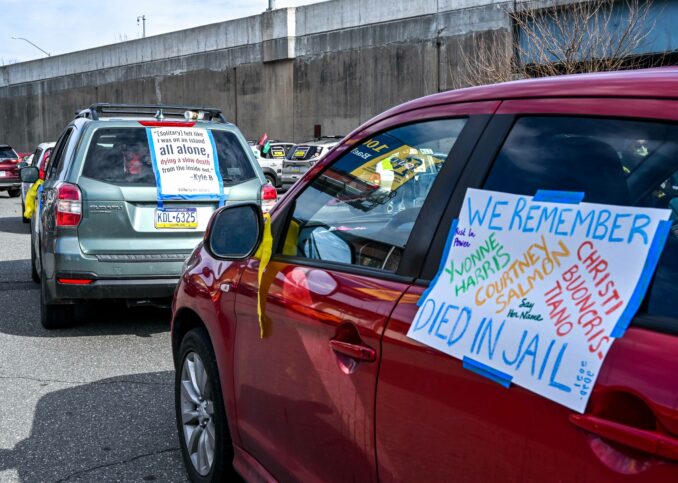 Incarcerated people in Philadelphia’s jails — 90% awaiting trial while not convicted of any crime — are suffering from horrible jail conditions. In response, family members and community activists drove at least 50 vehicles in a Feb. 12 caravan to highlight this city’s crisis.

Organized by the Abolitionist Law Center, the Human Rights Coalition and other community activist groups, the caravan circled three times around the Curran-Fromhold Correctional Facility neighborhood in Northeast Philadelphia.

The vehicles, decorated with placards and yellow ribbons, horns blaring, then snaked through many communities until finally ending their mobile protest at City Hall, two hours later.

Prisoners are not being provided enough time out of their cells to shower, get medical care or make phone calls. Some people are not let out of their cells for days at a time, a violation of constitutional protection against cruel and unusual punishment. At least 18 prisoners died in Philadelphia jails in 2021.

In January, for the second time in seven months, the Pennsylvania Institutional Law Project succeeded, through the legal system, in forcing Philadelphia to pay $125,000 to community bail advocates, because of the inhumane and dangerous conditions. The Philadelphia Bail Fund said it plans to use the money “to free as many people as possible” from what it called “deplorable, life-threatening conditions” behind bars. (Inquirer.com, Feb. 1)

Yet people continue to be subjected to violence and are consistently being denied medical care, adequate hygiene or nutrition, access to counsel and even court dates. Since nearly everyone in jails are being denied more than an hour or two of out-of-cell time, the entire system is in the equivalent of solitary confinement.

The caravan comes on the heels of many protests over the last two years against the city’s failures to protect the rights of people inside city jail and to stop Philadelphia using the torture of solitary confinement. No one should have to be incarcerated under such barbaric conditions.

Jails continue to harm people and fail to make our communities safer; strong reasons why jails and prisons should be abolished.