February, as we all know, is Black History month: a time to celebrate Black Americans and their accomplishments. Corporations and the bourgeois establishments will no doubt pay lip service to the African American experience by hawking items with Black historical figures on them, likely as another way to profit off marginalized communities, which is par for the course for capitalists. While these superficial acts of solidarity the ruling class extends seem good on the surface, we must take heed and remember the struggle for Black Liberation in its entirety.

For as long as the United States of America has existed, it has inflicted the most horrific violence one can imagine on enslaved African people and their descendants. This violence by the white-supremacist ruling class kicked into high gear the moment Black Americans started posing a serious threat to the settler-colonial project. 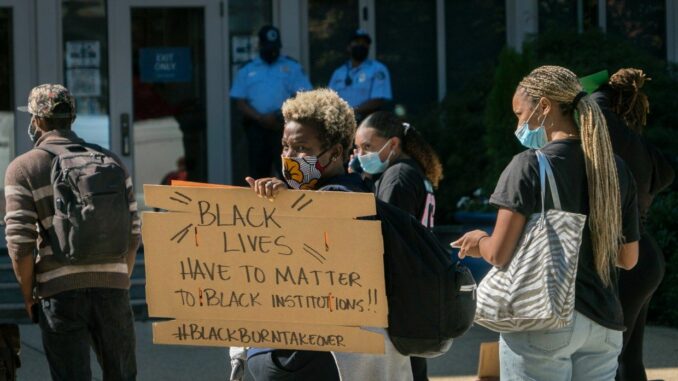 In 1866, a pair of massacres took hold in the Black communities of Memphis, Tennessee, and New Orleans. In the former, white mobs pillaged Black neighborhoods and killed 46 Black people and savagely raped five Black women all while burning 90 homes, four churches and 12 schools. (tinyurl.com/2p8bwymt)

In New Orleans, even more carnage was inflicted, as 238 people were killed, and 46 people were wounded. Both massacres were fueled by the reactionary police forces, which perfectly highlights the dangers the so-called “men in uniform” have posed to Black people throughout the history of the United States.

The antagonistic violence against Black communities carried on into the 20th century. In 1921 a spurious rape accusation against a teenager named Dick Rowland motivated a gang of white rioters to raid the Black neighborhood of Greenwood in Tulsa, Oklahoma. The damage the white mob left in its wake was staggering: 35 city blocks were burned, more than 800 people were injured, and as many as 300 people had died. (tinyurl.com/2s3udtck) The neighborhood of Greenwood would never be the same, as many of the survivors of that horrific day in June fled from Tulsa and away from the physical and emotional impact.

White-supremacist violence against Black communities continues to this very day, with several examples of terroristic acts highlighting the ongoing threat settler-colonial nationalism poses to Black Liberation. The mass shooting enacted by Dylann Roof on a Black church in Charleston, South Carolina, on June 17, 2015, that claimed the lives of nine Black Americans, was motivated by the same phantom menace that spurred the Tulsa Massacre of 1921 and the tragic death of Emmitt Till in 1955.

These two tragic events project the racist myth that Black men posed a threat to the chastity of white women and by proxy the hegemonic masculinity of white-supremacist patriarchy. Before Roof pulled the trigger, he shouted: “You rape our women, and you’re taking over our country.” (tinyurl.com/2p8frana)

The subsequent treatment of Roof after he committed this demented act, being treated by the police to a Burger King meal like he hit a walk off home run in a little league game, stood in stark contrast to the senseless treatment the so-called “men in blue” have inflicted on innocent Black people, some of them children.

Anti-Black racist violence has also infiltrated Historically Black Colleges and Universities of higher learning. At the beginning of this year, HBCU colleges across the country have been on high alert over bomb threats. Universities such as Xavier University, Southern University and Prairie View A&M in Louisiana and even the prestigious institutions such as Spellman College and Howard University, have been on lockdown over this recent wave of bomb threats.

These threats against these institutions come on the heels of the Supreme Court reconsidering the role of affirmative action in college admission decisions. Using divide-and-conquer tactics, especially amongst Black and Asian people, white supremacists have been in the vanguard of robbing Black American youth of their opportunity to advance, not only themselves but their communities as well.

Not merely being satisfied with the courts being in their favor, they’ve resorted to outright terrorism on HBCUs and not the hallowed halls of the Ivy League, which were built in part on the blood and sweat of enslaved African people. Not to mention the fact that all this is taking place in the middle of the rise of the omicron variant, so not only do these students have to contend with the omnipresent threat of getting infected with COVID-19 but also the possibility that their lives could be taken from them in an instant.

Despite what bourgeoisie institutions might tell you, Black history is not confined to a 28-day period in the middle of winter, it encompasses the entirety of U.S. history. While you might hear the nonthreatening parts of Black history this month, it is important to recognize the violence Black people had to endure and to not be oblivious to it. It is time to consider the Black struggle in its entirety, and it’s time to fight back against white-supremacist violence to clear the way for Black Liberation.