The antiwar rally opposing the U.S./NATO war drive against Russia brought together a broad spectrum of participants, even before the official rally started at Love Park in Center City Philadelphia Feb. 12. 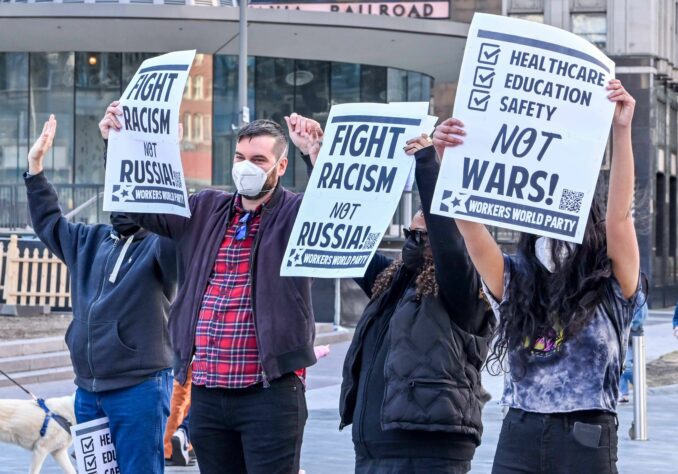 As Indigenous performers Kalpulli Kamaxtle Xiuhcóatl practiced drumming as the rally gathered, members of Philadelphia’s Black Cowboys rode their horses across the plaza, keeping beat with the drummers. People in the plaza, taking Valentine’s Day photos at the LOVE statue, drifted over to ask what was happening. When the drummers opened the rally, passersby stopped to watch and get flyers.

Noticeably absent was anyone counterprotesting or speaking in support of the war. Even the Black police officer assigned to ask “who’s in charge” spent time explaining why he was against another U.S. war.

Roughly 50 people who planned to participate turned out, but dozens more stopped by to hear speakers and engage in conversation. Signs throughout the rally spoke to key issues on everyone’s minds, calling for fighting racism; funding human needs including health care, housing and education; supporting workers’ union rights but not another war. 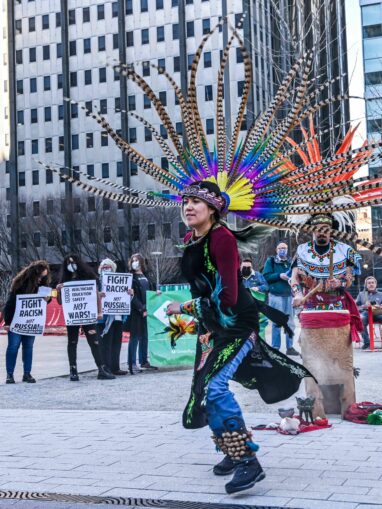 The rally was organized by a coalition of groups including Black Alliance for Peace, the Green Party of Philadelphia, International Action Center Phila, Workers World Party Phila., Party for Socialism and Liberation Phila. and Socialist Resurgence.

The rally was chaired by Betsey Piette with the International Action Center. Fermin Morales with Philadelphia Boricua spoke about the history of U.S. militarism and its particular impact on his native island Puerto Rico, where the U.S. Navy tested weapons for decades on the smaller island of Vieques until residents organized to kick them out.

Scott Williams from WWP led off his talk with chants. He described how U.S. corporate media through constant propaganda whips up sentiment for wars, while the U.S. and NATO install missiles and conduct “war games” at the Russian border. Williams called for funding for peoples’ needs not war.

Vietnam war veteran Joe Piette read a letter he sent to the Philadelphia Inquirer regarding their overt support for a war against Russia. “Similar campaigns, all lies, accompanied the war buildups against the former Yugoslavia in 1999, Afghanistan in 2001, Iraq in 2003 and Libya and Syria in 2011. Propaganda campaigns are an essential part of every imperialist war, as I learned when I was drafted in 1966 and sent to Vietnam.

“Every one of those wars left those countries in ruins and the people mourning thousands if not millions of deaths. The only winners were Lockheed Martin, Textron, Honeywell, United Technologies and other corporate profiteers.”

Maria Serna, an organizer for the Feb. 14 Day Without Immigrants, called for people to turn up at the plaza again on Monday to support immigrant rights for citizenship.

Other speakers included Chris Robinson with the Green Party Philadelphia, Ibrahim Shabaz from PSL, John Kirkland from SR, David Gibson from Peace Action and Eric Barr from the Communist Party-USA.