The Portland End the Blockade of Cuba Committee met Jan. 30 at Pioneer Courthouse Square to rally in solidarity against the blockade. Workers World Party Portland branch comrades were joined by members of the Industrial Workers of the World, Democratic Socialists of America, Women’s International League for Peace and Freedom, Jobs with Justice and the Portland Central American Solidarity Committee. The rally included picketing seen by drivers and pedestrians and speeches. 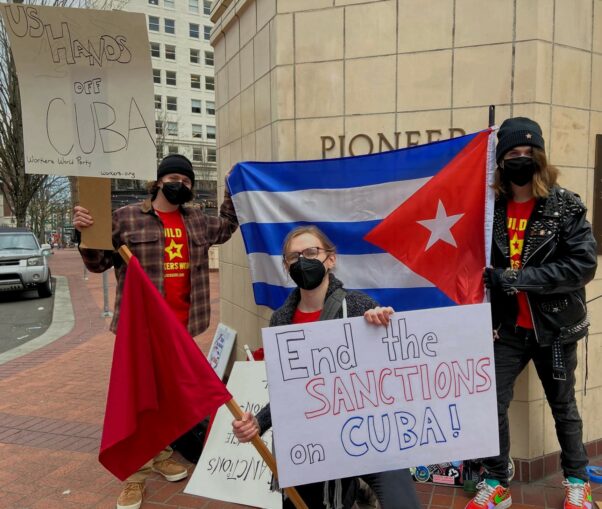 Following speeches, the groups held a car caravan from downtown, east through Burnside, down Cesar Chavez Boulevard, west on Hawthorne Avenue and ending in Central Eastside. The Committee plans to hold demonstrations monthly on the last Sunday of the month, in differing locations throughout Portland, to help bolster Portland’s public consciousness of the draconian sanctions against Cuba and build solidarity with the international movement supporting Cuba’s well-being and right to sovereignty.

Cuba has been under a devastating economic blockade since Feb. 3, 1962, as U.S.-dealt punishment for its people’s liberation. Food, medicine and other vital resources are forcibly withheld from the small island nation; and all trade with the U.S., its allies or client states is strictly forbidden. Each time it has come to a vote in the U.N., the nations of the world have voted against this blockade; but each time the United States has kept on with aggression and obstinance.