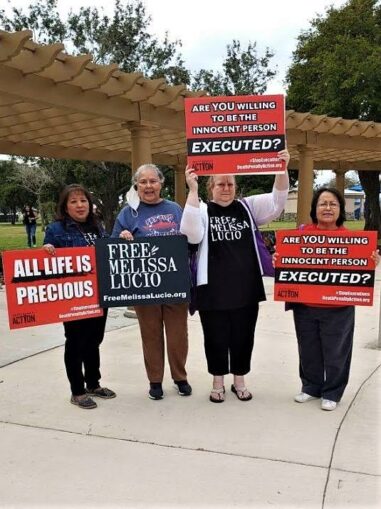 The new year began with Oklahoma legally lynching a severely mentally ill African American named Donald Grant. Killing someone with mental illness has outraged people worldwide. Plus, the three drugs used in his lethal injection on Jan. 27 are being challenged as unconstitutional in a lawsuit pending in federal court.

He became the state’s 43rd victim since 1977. Oklahoma County leads all U.S. counties with execution outside of Texas, which has executed 572 people. On the same day as Grant’s murder, Matthew Reeves was executed in Alabama.

The next scheduled execution is of Gilbert Postelle on Feb. 17 in Oklahoma County.

On International Working Women’s Day, March 8, Michael “Spider” Gonzales is set to be killed in Texas. He is a longtime friend of this reporter; and according to his attorneys Gonzales is innocent. They are still filing motions to stop the execution.

In a cruel twist, when Gonzales went to Odessa, Texas, for a motions hearing on Sept. 1, his birthday, the judge denied the two motions and gave him an execution date without looking up from his cellphone.

Thirteen more executions are set for this year — five in Texas, four in Ohio, two in Tennessee, and one each in Missouri and Oklahoma. A strange thing is that Ohio has seven set for 2023, six for 2024 and five for 2025. But even stranger is that Ohio Gov. Mike DeWine announced in December 2020 that lethal injection was no longer to be used and that legislators had to decide on another method of capital punishment. That has not been done.

The case drawing headlines now, with petitions, rallies, press conferences and national zoom meetings, is that of Melissa Lucio from Harlingen, Texas. Lucio, who is Latinx, is one of six women on death row in Texas and is innocent.

‘My mom is innocent’

According to the Innocence Project, “Melissa Lucio is facing execution on April 27 for the murder of her 2-year-old daughter Mariah — a crime that never occurred. Mariah died two days after accidently falling down a steep flight of stairs, and Melissa has maintained her innocence on death row for more than 14 years.”

On Feb. 5 activists along with Melissa’s family set up a booth at the First Saturday Jackson Street Market in Harlingen, Texas, and got out literature, T-shirts and yard signs for Melissa. They held signs and banners and spoke to hundreds and hundreds of people. Then on Feb. 6 a rally for Melissa was held in a local park, where every single flyer was distributed, and over 1,000 people learned about Melissa’s case and were asked to watch the film, “The State of Texas vs. Melissa.”

Her son John Lucio said in a press release announcing the Sunday rally, “Cameron County District Attorney Luis Saenz told our friends ‘No’ in a private meeting last week, saying he had to follow the decision of the jury in the case. But what did that jury hear? And what would they say now, after there is a completely new understanding of the forensic evidence by experts? My sister Mariah was not murdered, and my mom is innocent. We have no choice but to take this case to the court of public opinion.”

The family and activists are urging the public to watch the documentary film that uses forensic experts to explain why no murder occurred. “The State of Texas vs. Melissa” is currently streaming on Hulu and Amazon Prime.

French-American filmmaker Sabrina Van Tassell spoke at the Texas Annual March and Rally to Abolish the Death Penalty in December and told the crowd, “The more I investigated Melissa’s case, the more I realized that there had been extremely little news coverage or awareness about her case. I knew I had to make a film that would expose people to the truth.”

Lucio’s life and her wrongful conviction are difficult to learn about. She was raped for many years, beginning at age six, by an uncle and stepfather. She married at 16 to escape her home life but married Guadalupe Lucio who also abused her and left her after her fifth child. The abuse continued with her next partner, with whom she had seven more children including Mariah.

According to the Cornell Law School Center on the Death Penalty Worldwide, Melissa’s family sunk very deep into poverty, sometimes winding up homeless. The Center stated, “By the time she was 35, struggling with abuse, mental illness, addiction and poverty, Melissa had given birth to 12 children and suffered multiple miscarriages.”

More on Lucio’s life and her legal conviction can be found at (tinyurl.com/um5t6ckw).

The notoriously racist Texas Rangers played a huge role in Lucio being convicted and waiting for execution. She was aggressively and relentlessly questioned for over five hours by Ranger Victor Escalon on the same day her daughter died, as she was grieving. After this battering interrogation, she finally broke down and told Escalon what he wanted to hear so the questioning would stop. She told him, “I guess I did it. I’m responsible.” (Death Penalty Information Center)

During Lucio’s trial, Escalon testified that Lucio’s slumped posture, her passivity and her lack of eye contact with him told him “right then and there that she did it.” The defense was denied their right to have legal experts testify that Lucio’s response to the interrogation was a symptom of traumatic abuse. Her bowed head and sagging shoulders, her face showing no expression and her finally giving in to the Ranger were, according to the CLSC, “exactly what science predicts from a woman who had endured a lifetime of abuse by men.”

Coerced confessions are a leading cause of wrongful convictions, especially among mothers wrongly accused of killing their children. During the trial she was stopped from giving evidence of why she falsely confessed.

The Cameron County District Attorney had no physical evidence against Lucio but used her false confession. He likely felt his “win” would help his reelection, but today he is in federal prison for 14 years for bribery and extortion.

‘The system is flawed’

The Nation Registry of Exonerations has recorded almost 3,000 exonerations in the U.S. since 1989. Of these, 119 are women. Almost half were exonerated of crimes with child victims, and 63% of female exonerees were convicted of crimes that never occurred.

Sonya Chavez told Sunday’s rally that “Melissa’s my sister. I know she is innocent. I believe that if people knew the truth, they would agree with me.”

Delia Perez Meyer, who has an innocent brother on Texas death row, went to Harlingen for the weekend events. She said at the rally: “This system is so flawed. There’s tampering of evidence; there’s withholding of evidence; there’s collusion. A lot of terrible things go on in death row cases. Executions are wrong and archaic. It doesn’t matter if a person is innocent or guilty, no one should be executed.”

On Feb. 7 over 30,000 petition signatures will be given to the DA in Brownsville.

In Houston, members of the Texas Death Penalty Abolition Movement decided at their February meeting to participate in a campaign to send Valentine’s Day cards to the DA and write a note asking him to watch the film and to drop the execution date if there’s any doubt. He can be contacted at: Cameron County DA Luis Saenz, 1100 East Monroe Street, Brownsville, TX, 78520; Phone: 956-544-0830; Fax: 956-544-0801; and on Twitter: tinyurl.com/yfzcd4fc.