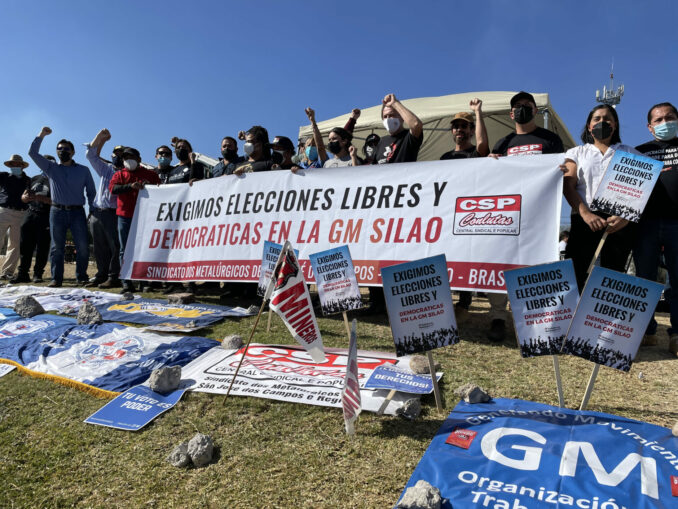 Brazilian unionists outside GM plant in Silao, Mexico, where workers were voting for the first independent union, Feb. 3.

General Motors workers in Silao, Mexico, have made history.

They have voted in the first independent union in any Mexican GM plant, defeating the bogus company union by a wide margin. For decades, company unions allied with the former ruling party, the Institutional Revolutionary Party (PRI), have colluded with auto companies to keep wages low and maximize exploitation. The highest-paid Mexican GM workers make in a 12-hour day little more than a U.S. autoworker earns per hour.

With the Feb. 3 election of the National Independent Union of Workers of the Automotive Industry (SINTTIA), the 6,500 Silao GM autoworkers will likely see their wages and benefits increase. But GM will still make huge profits from the sale of its Silverado model trucks, made in Mexico and Michigan, some of which fetch prices as high as $78,000. And CEO Mary Barra will not take a cut in salary, which was over $20 million in 2020.

The GM bosses refuse to acknowledge that Mexican autoworkers are dissatisfied with pay and conditions. GM spokesperson David Barnas claims “Our Silao employees choose GM and elect to remain with the company for extended careers because of the positive and healthy environment that we have established as a corporate leader in Mexico.” (Detroit Free Press, Feb. 4)

The 4,100 workers who voted “Sí” for SINTTIA would disagree. They complained of stagnant wages, denial of time-off requests, and not even being allowed to go to the bathroom. The company union, affiliated with Confederation of Mexican Workers (CTM), negotiated a poor contract without their input. The rank and file voted to throw out the CTM contract in August last year.

The AFL-CIO pushed for enforcement of a workers’ rights clause in the 2020 U.S.-Mexico-Canada Agreement, which replaced the 1994 North American Free Trade Agreement (NAFTA). This helped secure the right to vote for the Silao workers and potentially GM, Ford and Stellantis (formerly Chrysler) workers in other Mexican plants. Members of AFL-CIO-affiliated unions, along with Canadian and Brazilian unionists, demonstrated outside the plant Feb. 3 in solidarity with the Silao GM workers. The United Auto Workers hailed the election victory.

Jesus Barroso explained, “We’re fed up. Being fed up is what’s making us take this decision. I think we have the right to give our families, our kids, a better quality of life.” (aflcio.org)